Is India's Growth in Trouble?

The India population stands at over 1.2 billion people.  That means that GDP must keep growing at a fairly strong clip simply for the economy to tread water.  A fast rate of growth is imperative for the country to lift the standard of living for more and more people.

Yet, the annual rate of GDP growth is dropping.  While 6.1% is nothing to sneeze at, it must be placed into the population picture.  Remember, with a growing population, rapid growth (8%+) is mandatory.

However, there are signs of problems.  First, the central bank faces the classic policy squeeze of high inflation and slowing growth.

Indian inflation remains between the 8% and 10% level, where it has been for the better part of a year.

To tame inflation, the Indian central bank has been raising rates, which obviously has a negative impact on overall economic growth. 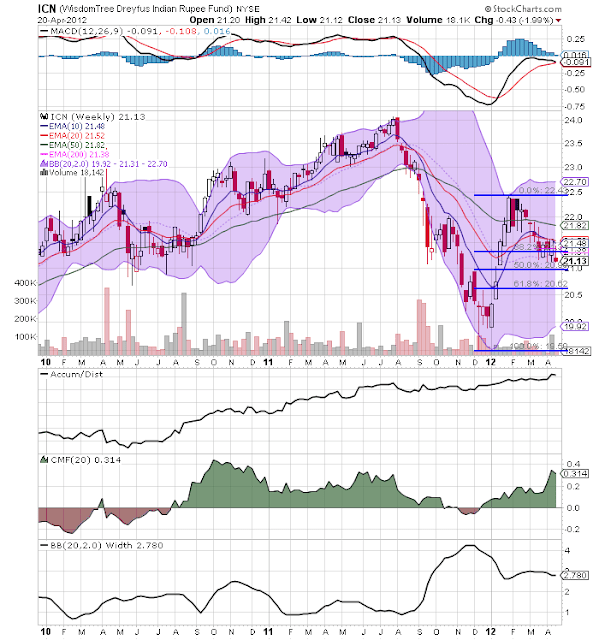 The above chart of the rupee shows the overall damage of this situation.  After falling neary 20% (from 24 - 19.5), the rupee rebounded nearly 15%.  However, since the mid-Spring, the rupee has been falling as investors have lost confidence in the economies ability to grow.

In addition, the possibilities for further growth seem to be lower.  The Reserve Bank of India made the following points in their latest policy announcement:


Early indicators suggest that growth may have bottomed out in Q3 of 2011-12 but recovery may be slow during 2012-13. Lower global demand, domestic policy uncertainties and the cumulative impact of monetary tightening lowered the growth rate to below seven per cent over the last two quarters. Industrial growth remains subdued due to supply-side bottlenecks, particularly in the mining sector, and moderation in investment demand. With measures being taken to remove supply-side bottlenecks, progress on fiscal consolidation could create conditions for a more favourable growth-inflation dynamic.
.....
The growth slowdown has been driven by a sharp fall in investment, some moderation in private consumption and fall in net external demand. The drag from investment is likely to continue in the near term. Corporate investment intentions continued to drop during Q3 of 2011-12. Consultations with industry and banks suggest that new project investment continue to be sluggish. However, if increased capital outlays in the latest budget are speedily translated into government capital expenditure,it could crowd in private investment.
.....
The balance of payments (BoP) came under significant stress during Q3 of 2011-12 as the current account deficit (CAD) widened substantially and capital inflows declined.This resulted in a drawing down of foreign exchange reserves.The wider CAD, increase in external debt,weakening net international investment position (NIIP) and deteriorating vulnerability indicators underscore the need for more prudent external sector management and demand management policies to limit the absorption impact that is keeping import demand high.While capital inflows have revived somewhat in 2012, BoP risks remain due to high oil prices and uncertainties in the global economy.


The above picture is not pretty; instead, it shows an economy that is in major trouble.  Consider the following points:

So, business is holding onto cash instead of putting it to work.  That's before we get to the balance of payment (BoP) issue.  Less money is coming into the country for investment, meaning the RBI had to tap its foreign currency reserves, draining its position.

There have been some great blog posts on this issue that really cover the issues well.