On March 18, I wrote the following:

Durable goods orders are a very volatile series. However, their current lack of movement is beginning to concern me regarding the big picture.

In light of that, we got some good news yesterday:

A key gauge of U.S. manufacturing rose in March and new orders in February were stronger than initially thought, indicating a vibrant factory sector even as the economy slowed in the first quarter.

The rise in March durable goods orders beat economists' expectations for a 2 percent advance, while orders in February had been previously reported to have dropped 0.6 percent,

Though the report -- which showed upward revisions to key categories in February -- did not change views that the economy slowed sharply in the first three months of this year, it confirmed that manufacturing continued to power the recovery.

Here is an updated chart of the data: 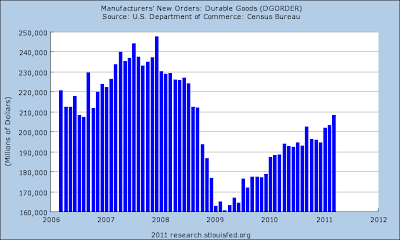 While still below pre-recession levels, the chart does look better.

With the recent drops in three Fed region manufacturing indexes (Philadelphia, Dallas and Richmond) -- and manufacturing being a key driver of the current expansion -- these data series are disproportionately important. The durable goods chart is starting to look a little better. However, I'm going to reserve judgement for the next few months as we get more information about the manufacturing sector.
Posted by Unknown at 11:30:00 AM