A Closer Look at M2

A category within the money supply that includes M1 in addition to all time-related deposits, savings deposits, and non-institutional money-market funds.

M2 is a broader classification of money than M1. Economists use M2 when looking to quantify the amount of money in circulation and trying to explain different economic monetary conditions.

In other words, M2 is liquid money (M1) plus assets consumers can readily access, but usually use as "back-up" funds like savings accounts and money market accounts. This is money that people keep in reserve. 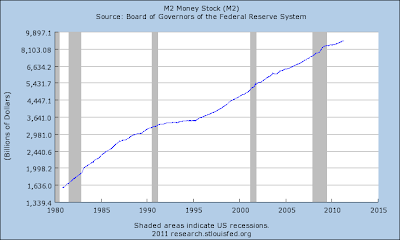 Let's begin our look at M2 with a simple logarithmic chart of M2. Notice that -- unlike M1 -- M2's rise is far more consistent over the last 25 years. While its rise was somewhat slower during the first part of the 1990s expansion, its rise continued in the mid-1990s and has moved higher at near the same pace for the last 15 years. 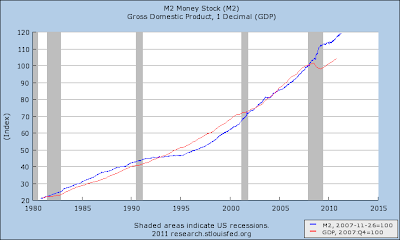 Above is a chart that shows M2 and GDP on a scale of 100 to better compare their relative performance. Note that unlike the M1 chart from yesterday, this chart shows a closely correlated performance of both numbers, indicating a strong relationship. 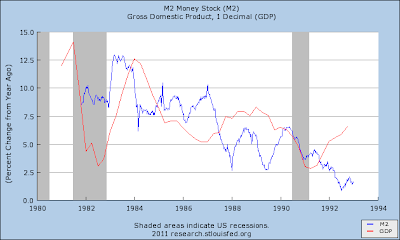 The M2/GDP YOY percentage change comparison for the 1980-1994 periods reveals little correlation. At times they move in tandem, but at over times they move in completely opposite directions. There is a general relationship for the 1980s expansion as both lines have a general downward shift, but the relationship is at best casual; no firm conclusions can be drawn from this chart. 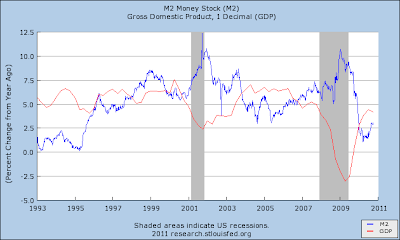 The lack of correlation between the YOY percentage change between M2 and GDP continues in this chart that shows the relationship for 1993-2010. In fact during both recessions there is an inverse relationship between the two -- a very counter-factual development indeed.

Like M1, the the YOY charts show nothing meaningful, although the scale 100 charts show a strong overall correlation.
Posted by Unknown at 8:30:00 AM