Are We At a Market Top?

The bearish argument has the following 10 signs:

S&P (SPY) profit margins are at or near historic highs. Given rising input costs, especially from energy and commodities; these will start to come down and reduce expected earnings. Witness the statements from Kimberley Clark (KMB), Wal-Mart (WMT), McDonalds (MCD), Xerox (XRX),…etc all warning of higher costs over last several weeks

The continued rise of gas prices. Gas is at or approaching $4 a gallon in most states. This is eerily like the summer of 2008 and will have negative impacts on consumer sentiment, spending, Obama’s poll numbers, and high priced retailers. See UA’s ten percent plunge yesterday on rising inventory levels.

Continued and escalating tension in the Middle East. Libya, Syria, Egypt, Bahrain, Yemen, Oman, Tunisia, etc….all have seen dramatic unrest. This will continue to impact oil prices and has the potential to be a Black Swan if it spreads to a major oil producing state like Saudi Arabia.

IPO Activity is at a four year high, which is generally a good contrarian sign for the market

Seasonality as we are entering historically the worst time for the market. Sell in May and Go Away seems like an appropriate rallying cry this year.

Europe. Austerity measures are negatively impacting growth. Greece and Ireland have received bailouts, but will probably need to restructure their debt eventually. Portugal is waiting its turn and Spain is on the clock. Voters predictably are choosing parties that might reject supporting any further assistance; see Finland. This cauldron has the potential to blow up any day.

China is taking more and more measures to curb inflation and property speculation. This will eventually have negative impacts to worldwide growth.
Merger Monday is back as we have seen a large increase in M&A activity this year.
Another good contrarian sign.

The end of fiscal stimulus and state budget challenges will severely curtail job and economic growth as state and local governments enact plans to balance budgets through layoffs and other spending cutbacks.

Given the approaching end of QE2 as well as the upcoming federal budget battles, the political acrimony that will be unleashed is not likely to be good for overall health of the market environment

And the Bullish Side:

Let’s look at the SPY chart. It speaks for itself – i.e., bullish. 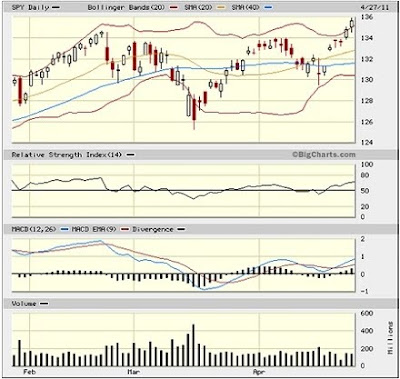 Price broke out strongly above previous resistance at $134. RSI crossed up strongly through the neutral line last week and is headed for a date with overbought territory soon. Similarly, MACD has a bullish crossover and is pointing up. Price is well above all of its daily moving averages such that some mean reversion will be in order soon – but not necessarily much of a pullback, as the moving averages play catch-up. Volume on these strong days, however, is still disappointing.

And more from the bullish side:

As long as we stay above the 850 level, the Russell remains in primary uptrend/bullish mode with no remaining overhead levels of resistance to monitor.

Like the Russell 2000, the NASDAQ at new recovery highs breaks a “line in the sand” to the bullish camp, forcing some bears/short-sellers to buy-back positions to cover (a potential short-squeeze).

I know there are a lot of bearish commentaries out there, but price tells a different story, and it continues to do so as long as the indexes remain at new recovery (or lifetime) highs.

Unless we fall back under 850 in the Russell or 2,800 in the NASDAQ soon, then the market continues to be dominated by the primary uptrend and the buyers/bulls.

Also consider this from Marketbeat:

But for my money, the thing I’m watching is the bond market. The yield on the 10-year has been moving pretty steadily lower since it crested at a bit more than 3.70% back in February. And despite all the inflationista frothing, fiscal debt debates, Bill Gross dismissals and S&P outlook warnings, investors have kept buying Uncle Sam’s IOUs.

It doesn’t get as much attention as the stock market, but in the investment world the bond market is often thought to be the dog wagging the tail that is the stock market. If so, you might want to take a bit of profit off the table.

As I reaffirmed on Wednesday, I'm very suspicious of the market's current move higher, but for fundamental reasons. As several commenters above noted, you can argue the technicals are strong. However, I believe in a blended approach which coordinates fundamental and technical analysis and right now the fundamental analysis is concerning. I should also note -- I could be missing a move higher. But I'd rather be safe given the current environment.
Posted by Unknown at 8:30:00 AM