Over the last few weeks, with the exception of today, the price action has been weak. There were two strong down bars, three weaker moves higher, another strong downward bar and then a weak up bar. Today's action is the only strong bar over the last 8 trading sessions.

The overall feeling I can't shake is that with gas at $3.84/gallon on average, traders are incredibly sensitive to the effect of higher oil prices on the expansion. This is probably what led Goldman to issue its sell recommendation on commodities last week. In short, I keep thinking we already have a top built into the market caused by economic fundamentals. On that order, consider this chart from the St. Louis FRED: 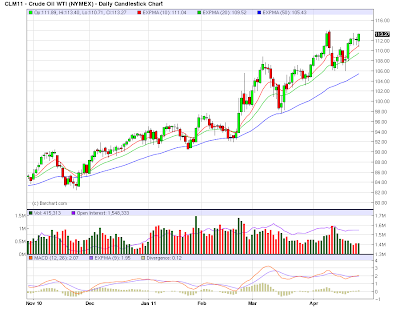 Notice that over the last week, we've had one day of solid gains followed by three days of weaker price action. Additionally, prices have been contained by the 113/114 price level -- this despite the Middle East still being in pretty heavy turmoil. Also note the declining MACD and weak position of the overall MACD line, which shows a remarkable lack of momentum. 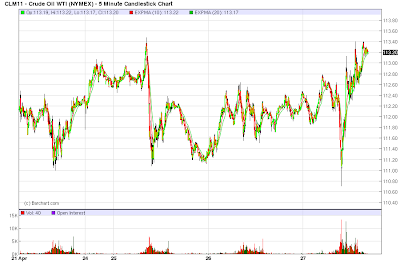 Note the remarkable lack of conviction in the overall market on the 5-minute chart. There are very few sharp rallies and prices seem to get stalled in the 113/114 area.

This week, I'm still left with the feeling that traders are sensitive to the overall price of gas. In addition, consider the fact that the oil market has not advanced due to the ongoing problems in the Middle East. And, we're starting to get word of decreased gasoline demand and a possible slowing economy in Q1.

While my feeling is not scientific, I'm still of the opinion there is not much upside room in the oil market, given gas' current price.
Posted by Unknown at 3:30:00 PM