A Closer Look at MZM

MZM has become one of the preferred measures of money supply because it better represents money readily available within the economy for spending and consumption. This measurement derives its name from its mixture of all the liquid and zero maturity money found within the three "M's."

So this concept lies between M1 and M2. 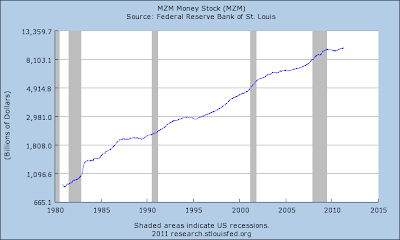 The above chart is the total of MZM on a logarithmic scale. When the overall trend is up, there have been some noticeable sideways moves: the mid-1980s, the late 1980s , the mid-1990s and right after the last recession. 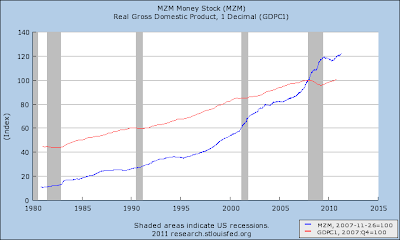 The above chart places total MZM and GDP on a 200 scale. Notice that -- like the other monetary aggregates, both have a general uptrend. However, MZM's overall pace of growth has been accelerating faster than GDP since the end of the last expansion. 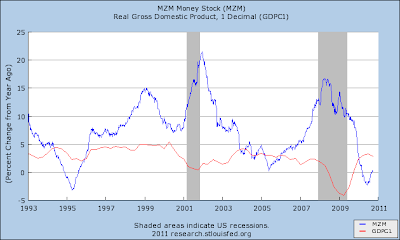 The above chart shows MZM's and GDPs YOY percentage change for the years 1993 through 2010. In 1995 we see a dip and then rise in MZM which corresponds to the similar movement in GDP, but MZM's move is far more prounced. During the second half of the expansion MZM rises with no concurrent move in GDP.

As with the other monetary aggregates, I find it interesting that the YOY relationships are so weak; I would have expected a more solid relationship. However, the one to one relationships are still solid, which makes sense. In a $14 trillion economy, there has to be a sufficient amount of money to actually engage in transactions.
Posted by Unknown at 8:30:00 AM