Reports from the twelve Federal Reserve Districts suggest that national economic activity continued to expand at a modest to moderate pace during the reporting period of early July through late August. Eight Districts characterized growth as moderate; of the remaining four, Boston, Atlanta, and San Francisco reported modest growth, and Chicago indicated activity had improved. Consumer spending rose in most Districts, reflecting, in part, strong demand for automobiles and housing-related goods. Activity in the travel and tourism sector expanded in most areas. Demand for nonfinancial services, including professional and transportation services, increased slightly on net. Manufacturing activity expanded modestly. Residential real estate activity increased moderately in most Districts, and demand for nonresidential real estate gained overall. Lending activity was mixed. Lending standards were largely unchanged, while credit quality improved. Demand for agricultural products was strong during the reporting period, but growing conditions and production in some areas were somewhat weak as a consequence of extreme weather. Demand for natural resource products was stable or up slightly, and extraction increased in anticipation of further demand growth.

But two releases last week added bullish fuel to the economic argument in the guise of the ISM manufacturing and service numbers (we've already covered the ISM numbers in two posts see here and here).

The ISM manufacturing number was strong:

Here's a chart of the number: 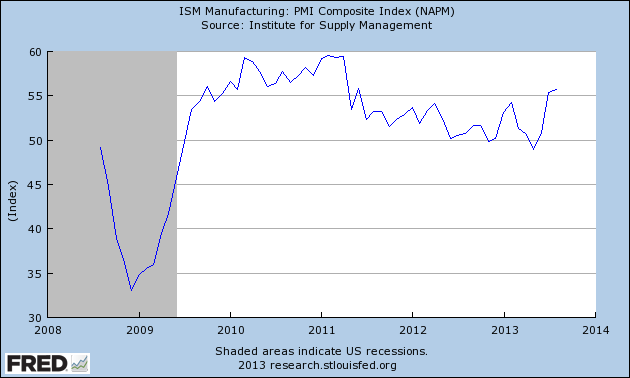 The two most recent readings show strong upward movement, rising higher than all levels seen before the 1Q11.  15 of the 18 industries reported growth.  Last week, NDD noted the new orders index is very bullish for the next few months.

The anecdotal quotes are a bit less bullish, however:
Several industries are reporting a slowing with the only visible cause being sequestration.  However, no one is foreseeing an imminent collapse.  And even with the recent slowing, the year over year numbers are still higher.

Let's turn to the services number:

The chart shows the recent strength of the number: 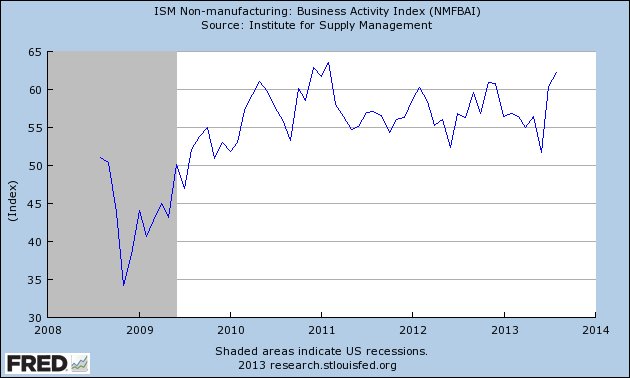 The anecdotal stories are more bullish than the manufacturing sector:

These combined reading of the ISM numbers is the economy is ripe for higher growth.  Manufacturing new orders numbers are very bullish while the service sector appears to be on very solid ground.
Posted by Unknown at 6:00:00 AM