The gaping hole in the jobs recovery is manufacturing

There simply is no question that there has been a jobs recovery since the end of 2009. While it hasn't been fast enough, the 6 million plus people who have jobs now who didn't at that time would probably disagree strongly with those few who continue to insist on using scare quotes.

The rejoinder has been that jobs haven't grown nearly fast enough to close the gap with where they need to be taking into account population growth. In the aggregate, adjusted for population, job growth has been slow. But as we will see, the poor growth is concentrated in just a few areas, and in particular in manufacturing.

To make the point, every single graph I am running in this post describes one or more category of jobs, as a percent of the population.

Jobs are broadly divided into service and goods-producing sectors. Let's start with the service sector.

The first graph below shows the entirety of service sector jobs (blue) and all private sector service jobs (i.e., not including governement jobs (red)) for the last half century: 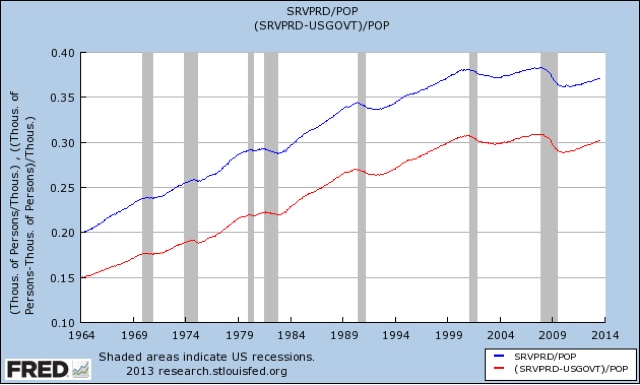 As you can see, the service sector grew almost relentlessly until about 1999, and broadly speaking, has held steady since.

This next graph focuses in on the last 15 years. To show the trend clearly, I've added 0.075% to the private-sector only line (red), which does not affect its slope at all: 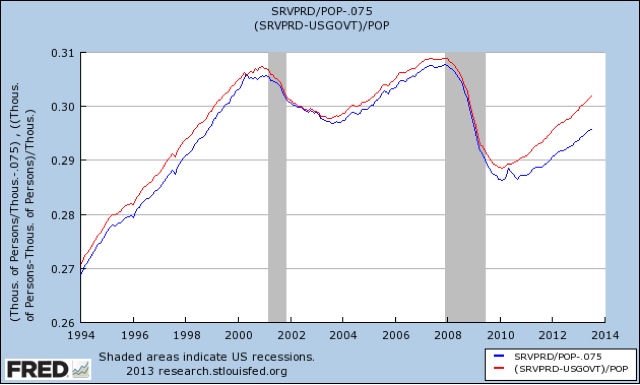 This graph tells us two things:

- (1) private sector service jobs have almost completely recovered from their recession losses. As a share of the population, there are as many private sector service jobs as there were in the boom year of 1999 and from 2003 into 2005. In fact it is very questionable that we would want as many services jobs as we had as a percent of the workforce immediately before the 2008-09 severe recession. To have as many as we did in the peak year of the tech boom would only take about another 0.25% or so, or about 800,000. At the clip of 150,000 a month, if present trends continue we'll hit that sometime between the end of this year and next spring.

- (2) It would take about another 0.5% of the population getting federal, state, and local jobs to bring those back up to where they were, on average, in the 10 years between the tech boom and the onset of the great recession. That's about 1,500,000 jobs. In other words, not only do we have to rehire all the police and fire personnel and teachers who have been let go, but to keep even with population growth we need to hire more.

Now let's turn to the goods-producing sector of the economy.

The first graph shows all goods-producing jobs (blue), and just manufacturing plus construction jobs (red). The primary difference, which isn't much, is employment in resource extraction such as mining: 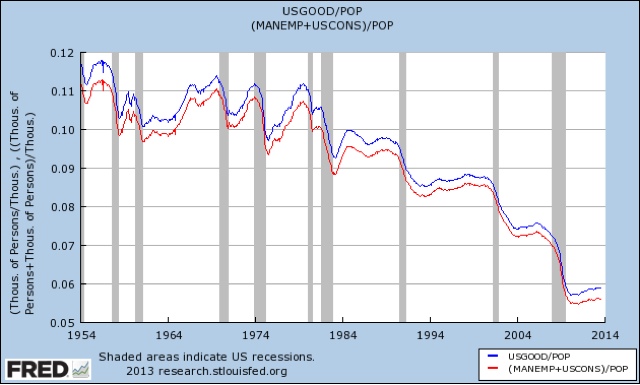 Note that goods producing jobs held fairly steady through the 1970's, but have been decreasing, and decreasing at an accelerating rate, since that time.

But the decline is not proportionate between manufacturing and construction. This is clearly shown when we isolate construction: 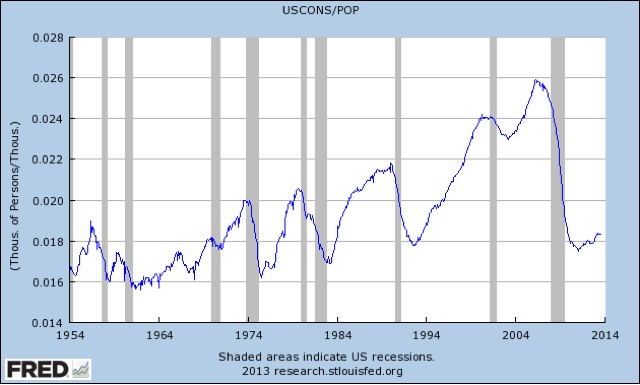 Before the late 1980's, construction had rarely exceeded 2% of the entire workforce. And only with the housing boom and bubble that began in the late 1990's did it exceed 2.2%. It is questionable to say the least that we would want to recreate all of the construction jobs that existed at the height of the bubble. Less than 0.4% of additional construction jobs would put us above the level of the late 1980's housing boom. And 0.5% puts us where we were in 2003. This is somewhere between 1.2 million and 1.6 million jobs. 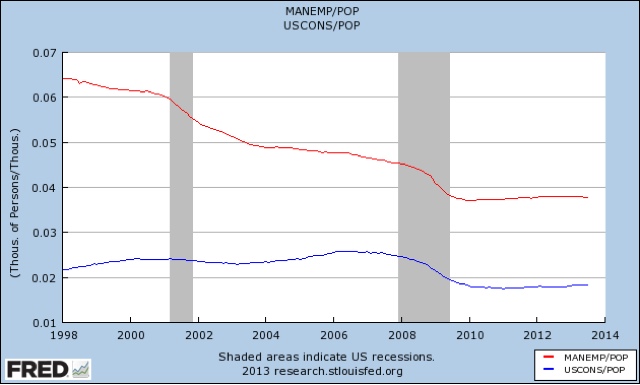 As we saw before, construction jobs have declined only 0.4% since then. But manufacturing jobs have declined 1% since October 2004 (the closest they ever came to being YoY positive during that expansion), and a full 2.5% since 1998. The stark contrast is better shown when I add 0.0425% to the construction sum, so that both rates are equal in 1998 (note, it does not affect the slope of the difference at all): 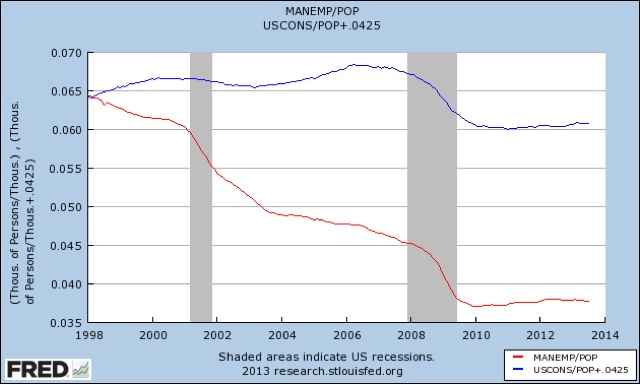 Here's one final graph, comparing total payrolls as a percentage of the population (blue), and all payrolls exclusive of manufacturing (red), plus 0.6% for direct comparisons with 1999: 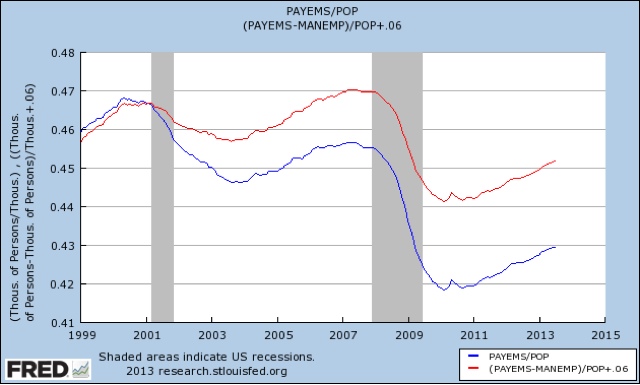 In short, even measuring conservatively, the manufacturing jobs lost since their last downward inflection point before the last recession account for half of the entire remaining shortfall in jobs during the recovery (3.5 million of 6.8 million). If we measure from the time of the last legitimate jobs boom, they account for two-thirds of all losses (7.5 million of 11.3 million).
Posted by New Deal democrat at 9:30:00 AM