Berkeley Professors Saez and Piketty have updated their work on family income in the US through 2012, making use of data from IRS returns. As covered by, for example, Prof. Mark Thoma, they found that the top 10% captured 95% of all of the increase in aggregate incomes since the recovery began. Here's the essential graph, showing the shares of total income over the last 100 years going to the 90th to 95th percentile (red), 95th to 99th percentile (blue), and the top 1 percent (black): 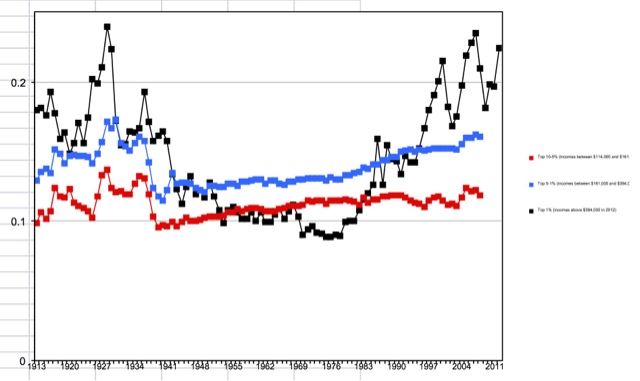 That lopsided accumulation of income flows naturally from the fact that, in addition to skyrocketing CEO compensation, the lion's share of capital gains accrue to those in the top income percentiles, and while wages of nonsupervisory workers have stagnated as many are still unemployed (red), the stock market has nearly doubled since the beginning of 2009 (blue): 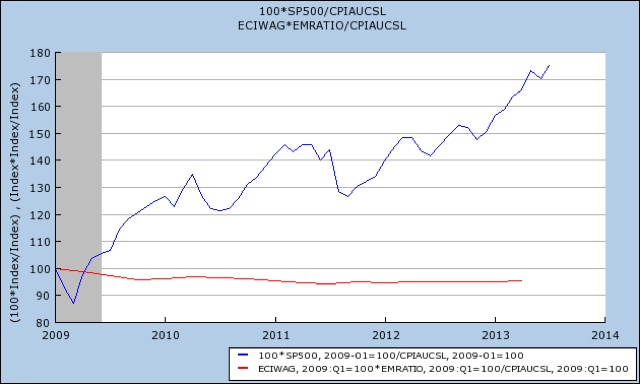 This study also updates their data on "real median family income", which I reported on a month ago: The Truth about the decline in real median household income.

Saez and Piketty report on the inflation adjusted median income of the bottom 90% at column (7) in Tables A4, A5, and A6. They found income exactly unchanged at $30,997 in 2012 compared with 2011. Excluding capital gains, measured one way they found a very slight increase from $31,426 to $31,522. Measured another way they found a very slight decrease from $30,458 to $30,439. These are all roughly a 10% decrease from 2008. While they provided no graphic representations for this, they did provide one of average income, showing an increase but still below its recession peak: 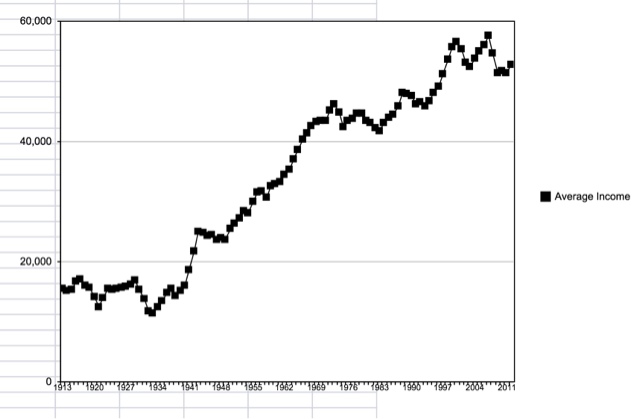 As I indicated a month ago, it is important to note that these are not median wages or salaries. Rather, median incomes reflect the significant and persistent decrease in the employment to population ratio, partly due to the long term unemployed, and partly due to Boomer retirements.

That stimulus was primarily aimed at the financial sector of the economy, and less so at the average American family, leading to the natural result that the capital-owning class has recovered spectacularly, while the well-being of wage-earners has not materially increased, strikes me as the essence of the spectacular failure of policy that Prof. Krugman was railing against last week.
Posted by New Deal democrat at 9:30:00 AM