Construction spending increased .6%.  While this was an overall good number it's important to remember that overall this number has been weak for the last four years, especially in the public area as shown on the charts kept by CR.

The ISM manufacturing number printed at 55.7 with strong internal increases.

The ISM non-manufacturing number printed at 58.6%.

While I'll be discussing both the ISM numbers later this week, consider these charts from the releases. 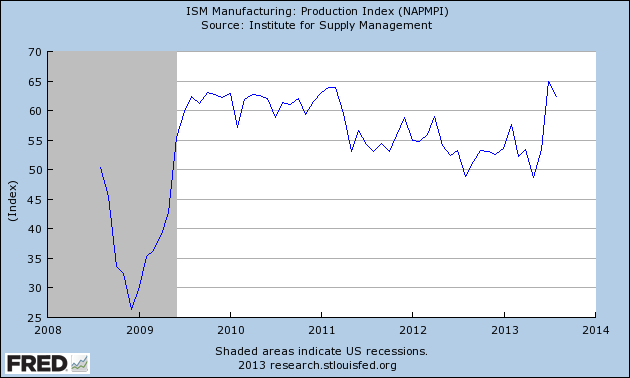 Overall manufacturing production spiked two months ago to levels not seen since right after the end of the recession. 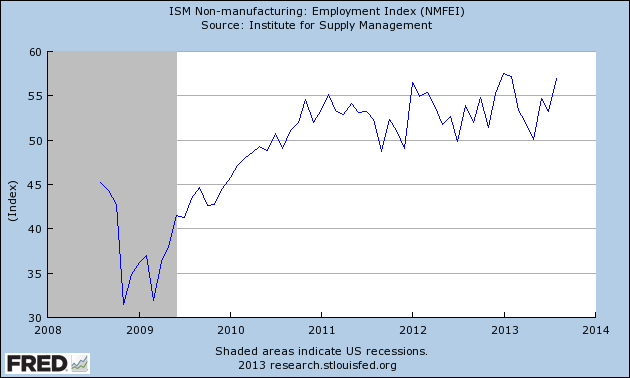 The ISM services employment index is rising to higher levels which may bode well for service employment figures over the next few months.

The trade gap came in at 39 billion.  On that topic, consider this chart from Calculated Risk: 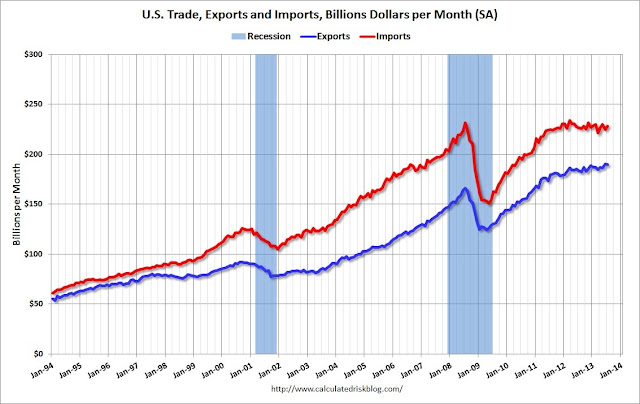 Notice how both imports and exports started to stall at the beginning of 2012.  The import stall is the sign of decreased domestic demand for goods while the export stall is a sign of the slowing world economy.

The US created 168,000 jobs last month.  NDD noted this is a second report with a net decrease in the previous month's revisions, which is  a yellow flag going forward.

None, although it could be argued the employment report's downward revisions to previous months would count as a neutral development.

Conclusion: last week's news was a mixed bag.  While the ISM numbers indicated both areas of the economy (service and manufacturing) were doing well, the downward revision to June and July's establishment jobs numbers were a yellow flag that is a bit concerning right now.  Add that to the other potential weaker numbers (the recent weak durable goods print, the downward revision in new home sales, oil's price spike, weak government contribution to GDP) and you have yet another week where economic numbers are raising some potential concern.

That being said, let's turn to the markets. 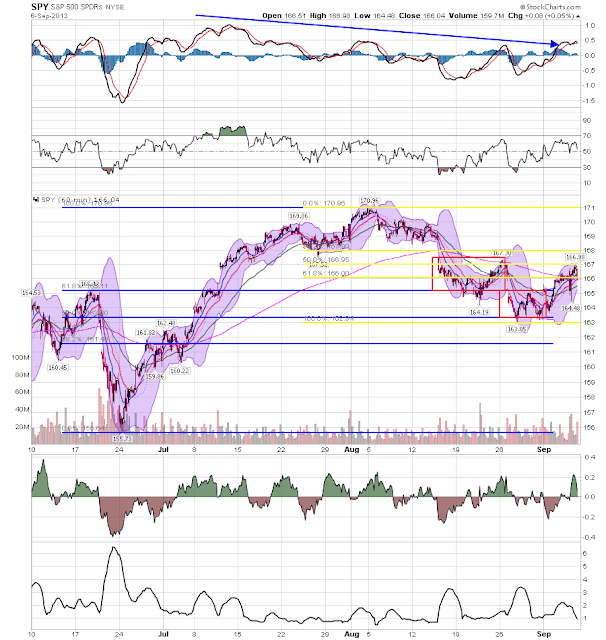 The 60 minute chart for the SPYs is a bit messy, so let's explain the three major technical developments.
All that being said all we really have is a rally (from late June to early August) following by a sell-off to Fib levels which was followed by a relief rally last week. 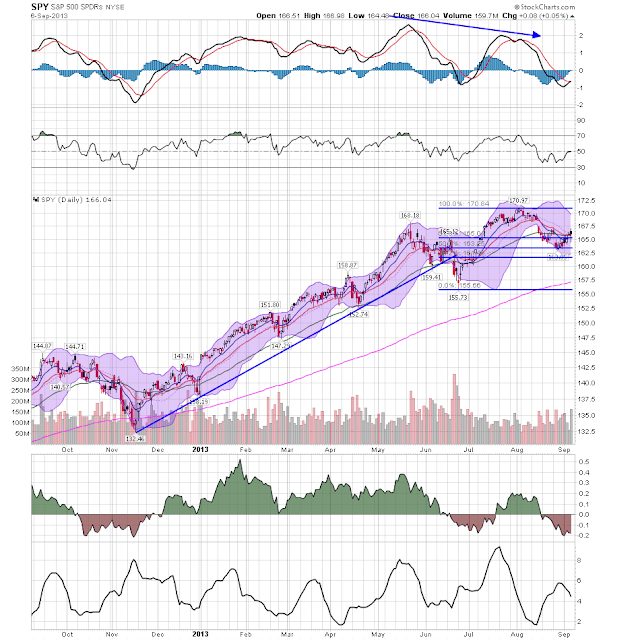 The daily chart puts the latest movement in better perspective, showing the sell-off and relief rally.  The underlying technicals show a weakening picture: the MACD's trend is one of decline, the shorter EMAs are moving lower and the CMF is negative.  This tells us that a rally is most likely a relief rally to a sell-off with another sell-off potentially down the line. 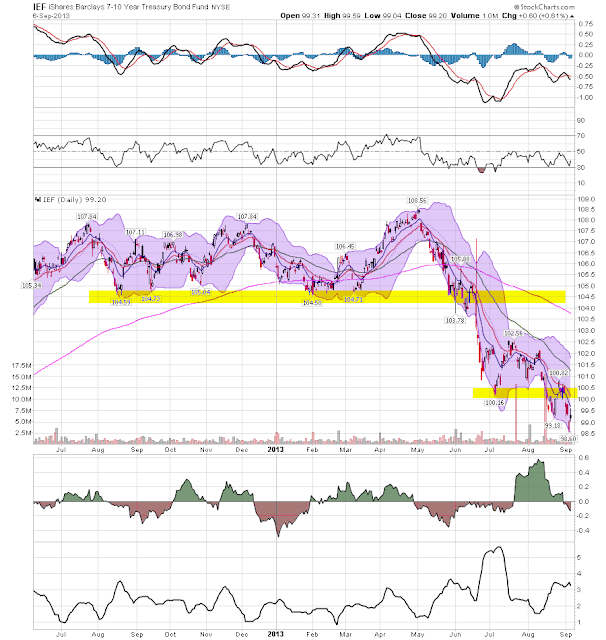 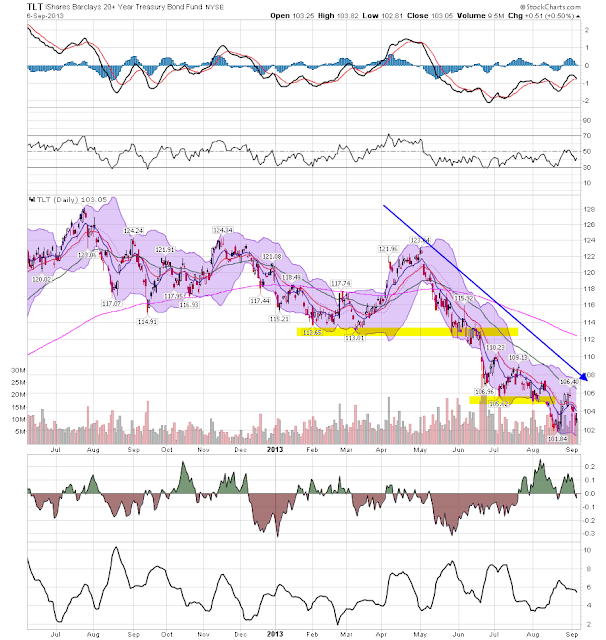 The treasury market continues its sell-off.  The belly of the curve (IEFs, top chart) have broken two key levels of support: 104 and 100.  The EMA picture is negative (all moving lower with the shorter below the longer), momentum is negative as is the CMF.  The long end of the curve (TLTs, bottom chart) has been declining at a sharper rate since the beginning of May.  Also note the bearish position of the EMAs and negative momentum.

Conclusion: the market are still in a transition.  The treasury sell-off -- which has occurred in reaction to the Fed's tapering announcement -- indicates the markets are potentially also anticipating higher inflation (caused by higher growth).  It could also be a sell-off which is trying to find a bottom after the announcement of the withdrawal of market support from the Fed.  Equities are at minimum consolidating recent gains.  They're waiting for some signal to move higher.  But as NDD has noted, corporate earnings are weakening which is not supportive of further advances.
Posted by Unknown at 6:00:00 AM