Recent news out of Japan has been positive, as recently noted on the FT Alphaville blog:

A recovery in industrial production and consumer spending points to above-trend growth in Q2. Consumer price inflation may soon make a brief appearance above zero on the back of higher energy and import prices. But deflation isn’t beaten yet. The splurge of Japanese data overnight confirms the overall positive trend in the economy. Notably, industrial production increased by 2% in the month of May, the fourth consecutive monthly increase. Output in May was boosted by electronic components and machinery in particular. Both industrial production and exports are now on an upward trend (see chart below). To a large extent this recovery is due to the weaker yen. Although the yen is above its recent lows against the US dollar, it is still 19% lower than last November.

... the fall in the yen has coincided with an equity market rally. This, plus an increase in inflation expectations triggered by aggressive monetary ease from the Bank of Japan, is also helping to boost consumer spending. For May household spending data show a 0.1% monthly gain, while retail trade data were up by 1.5%. Both are on an upward trend and will support another quarter of fairly robust GDP growth in Q2. Meanwhile headline CPI inflation was -0.3% in May, up from -0.7% in April.

Higher energy prices are contributing to less deflation. Electricity prices are up 8.7% over the last 12 months, the fastest rate in over 30 years. Higher import prices as a consequence of the weaker yen may push national CPI inflation slightly above zero in coming months. But of course this would not herald the end of deflation as underlying pressures remain deflationary.

And that's not all.  The latest data from the Tankan business survey shows that business confidence is on the rise.  The latest coincident economic indicators may be signaling a possible turning point and the Conference Board's leading indexes are all rising:

The Conference Board LEI for Japan increased again in April, its fifth consecutive gain. Stock prices and the Tankan business conditions survey both made large positive contributions this month. Between October 2012 and April 2013, the LEI increased 6.1 percent (about a 12.5 percent annual rate), sharply up from the decline of 5.0 percent (about a -9.7 percent annual rate) during the previous six months. Moreover, the strengths among the leading indicators have remained very widespread in recent months.
.....

Eight of the ten components that make up The Conference Board LEI for Japan increased in April. The positive contributors to the index – in order from the largest positive contributor to the smallest – include stock prices, the Tankan business conditions survey, the six month growth rate of labor productivity, dwelling units started, real operating profits*,  the interest rate spread,  real money supply, and the new orders for machinery and construction component*. The negative contributors include the index of overtime worked and (inverted) business failures. 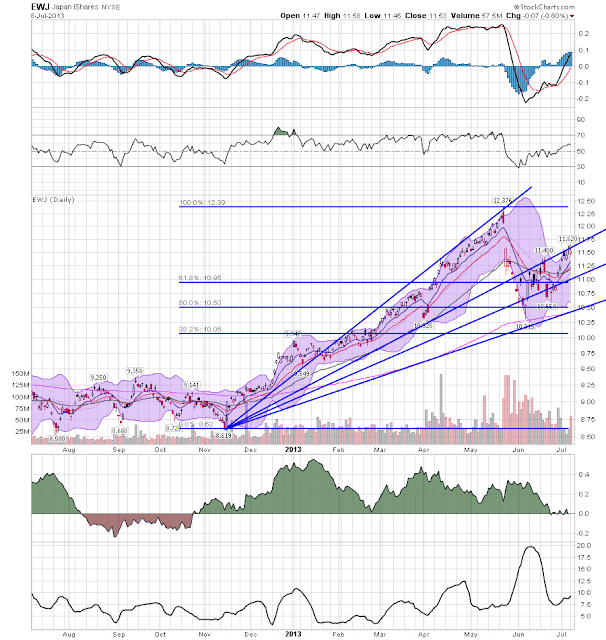 From mid-May to early June the Japanese ETF sold off about 17%, largely thinking that the rally was a bit overdone.  However, prices have since stabilized, trading between 10.25 and 11.25, also using the 200 day EMA as technical support.  The decreasing volume tells us the sell-off is probably done for now, while the MACD is rising and is now in positive territory. 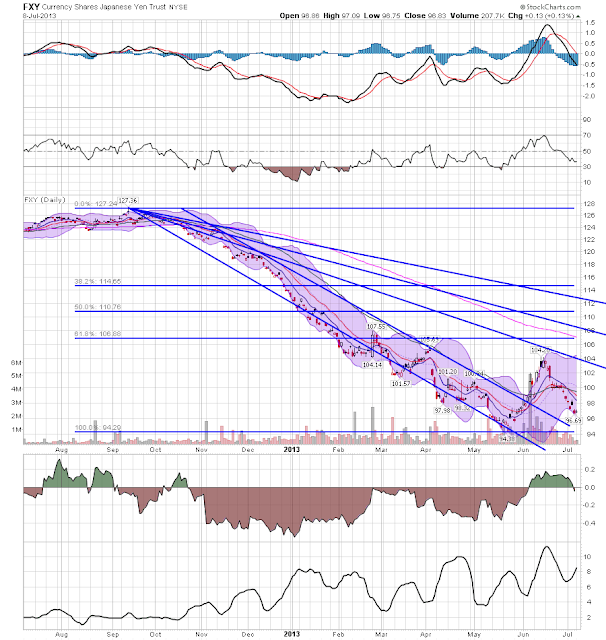 The yen rallied to just below the Fib fan from mid-May to mid-June, but has since fallen back.  Expect a second test of the 94 level within the next few weeks.
Posted by Unknown at 6:00:00 AM