ISM services also posted solid growth: "The NMI™ registered 52.2 percent in June, 1.5 percentage points lower than the 53.7 percent registered in May. This indicates continued growth at a slightly slower rate in the non-manufacturing sector. The Non-Manufacturing Business Activity Index registered 51.7 percent, which is 4.8 percentage points lower than the 56.5 percent reported in May, reflecting growth for the 47th consecutive month. The New Orders Index decreased by 5.2 percentage points to 50.8 percent, and the Employment Index increased 4.6 percentage points to 54.7 percent, indicating growth in employment for the 11th consecutive month. The Prices Index increased 1.4 percentage points to 52.5 percent, indicating prices increased at a faster rate in June when compared to May. According to the NMI™, 14 non-manufacturing industries reported growth in June. Respondents' comments are mixed about business conditions depending upon the industry and company. The majority indicate that growth has been slow and incremental; however, it is still better year over year."

Of note in the report is the decrease in new orders and production.  While both are still performing at expansion levels, they did drop.  Some of the drop may be simply due to the standard summer slowdown that occurs in businesses.

Construction spending was up .5% M/M and 5.4% Y/Y.  The increase was broad based, coming from residential, non-residential and public spending.   For more, please see this post at Calculated Risk.

Motor vehicle sales came in strong, with all US all US car companies reporting increases.  For more, see this post from NDD.

The employment report was very strong.  See these posts (here and here) from NDD.

Conclusion: the numbers this week were solid.  Both the manufacturing and service industry reports show expansion.  Construction spending is decent, which tells us the housing recovery continues as we move forward.  The employment report was very good -- especially the upward revisions, while car sales totals indicate consumers are buying autos at a strong pace.  In short, the economic backdrop is remarkably strong.

Let's turn to the markets, starting with the SPYs: 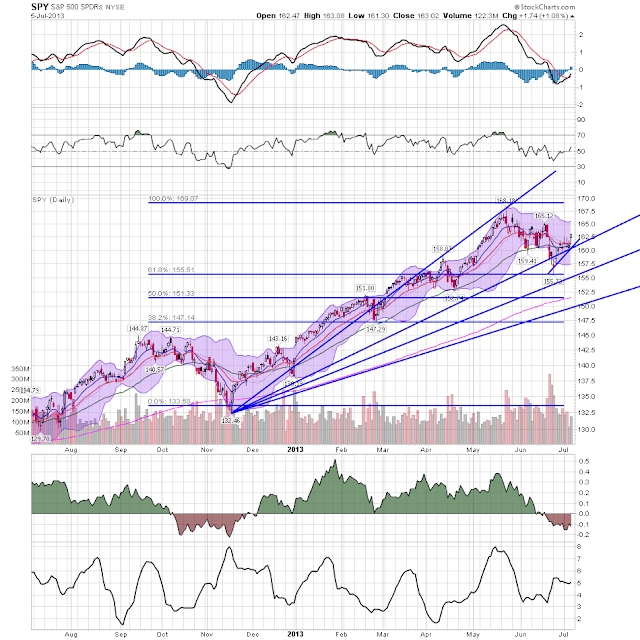 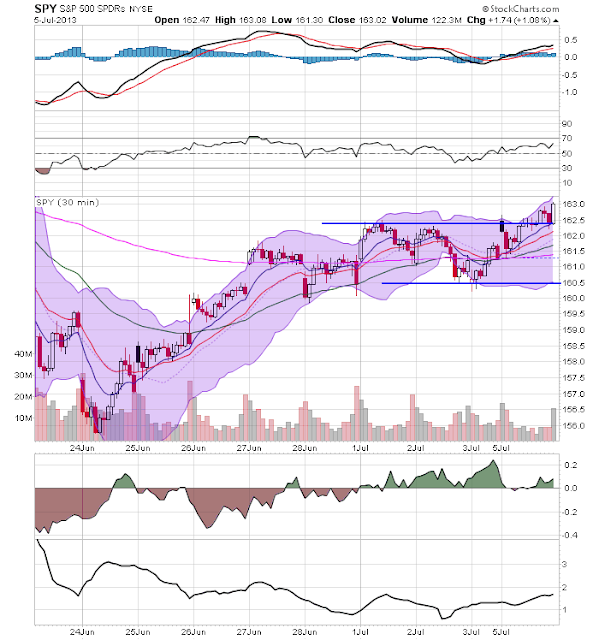 The daily SPY chart (top chart) shows that since the end of May, prices have been moving lower, but in a very disciplined manner.  They've dropped from 167 to about 162.5 -- a move lower of about 2.7%.  Momentum has clearly dropped as and the CMF.  However, the lack of a strong, protracted move lower indicates that traders are most likely taking profits from the post January 1 rally and waiting for the next big move in the markets.

The 30 minute chart (bottom chart) shows that last week there was in fact very little price action.  Prices in general traded in a two point range before moving higher in Friday in very weak action. 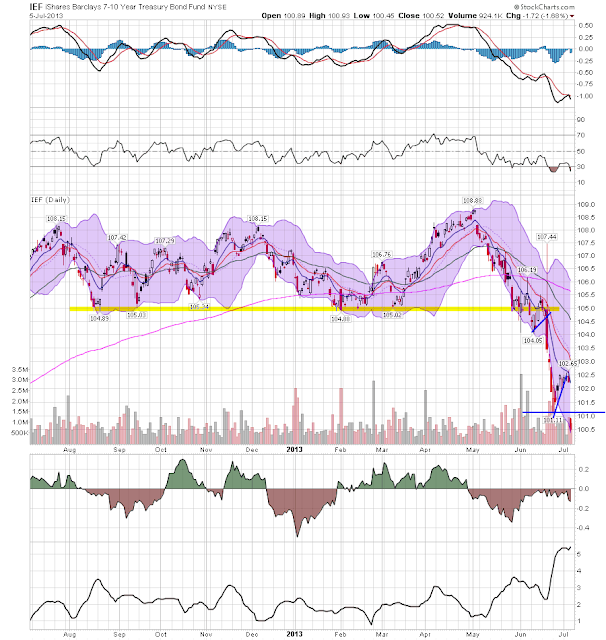 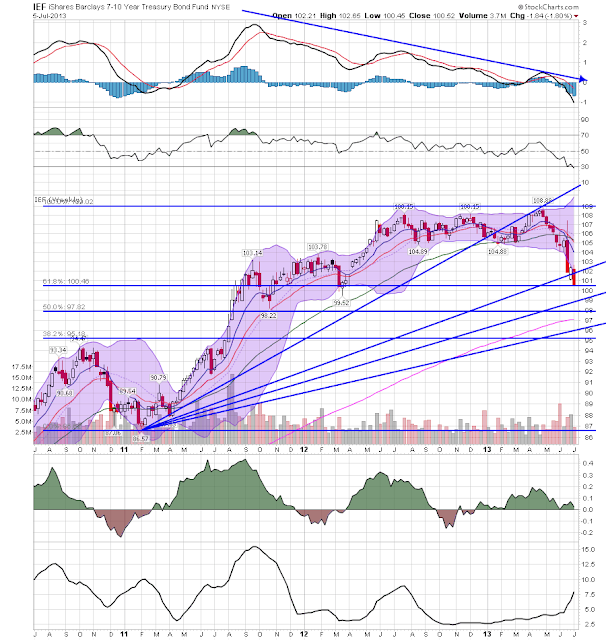 The treasury market continues to sell-off.  The daily chart (top chart) shows a very bearish chart.  All the shorter EMAs are moving lower, following prices.  Momentum is weak and money is flowing out of the market.  The weekly chart (bottom chart) shows that prices are right at top Fib level support. 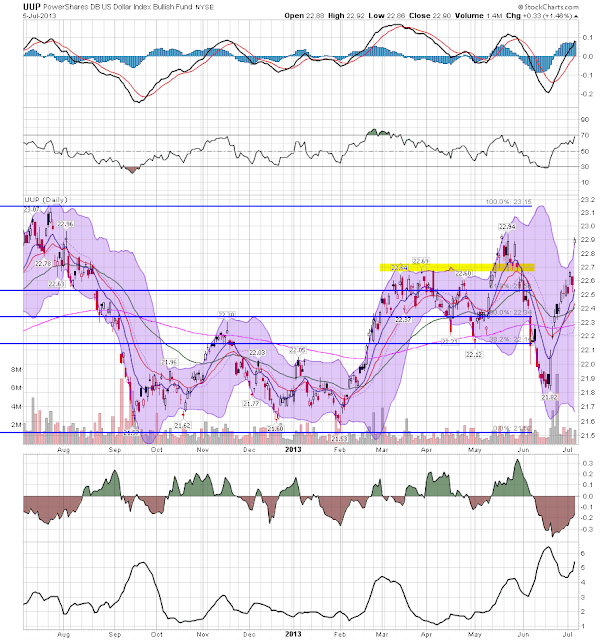 The dollar has been moving higher since mid-June.  However, it is still trading between 21.5 and 23.2.

The week ahead: we're now in the middle of summer, so expect the summer doldrums to hit trading.  In addition, the markets are still trying to understand and apply the Fed's announcement that they'll taper their asset purchase program. In response, we've seen a sell-off in both the treasury and equity markets.  Yet the underlying economic news has been strong, which should be supporting stocks.