Spain has been a basket case for over two years now.  However, recent news indicates the economy may at least least stabilizing.  From the latest Markit services PMI:

The Spanish service sector moved closer to stabilisation in June as rates of decline in activity, new business and work-in-hand all slowed. There was also a marked improvement in optimism during the month. That said, employment continued to fall at a marked pace. Meanwhile, the rate of input cost inflation was only marginal and companies lowered their output prices again.

The headline seasonally adjusted Business Activity Index – which is based on a single question asking respondents to report on the actual change in business activity at their companies compared to one month ago – rose for the second month running to 47.8 in June, from 47.3 in the previous month. This indicated a modest reduction in activity that was the slowest in the current sequence 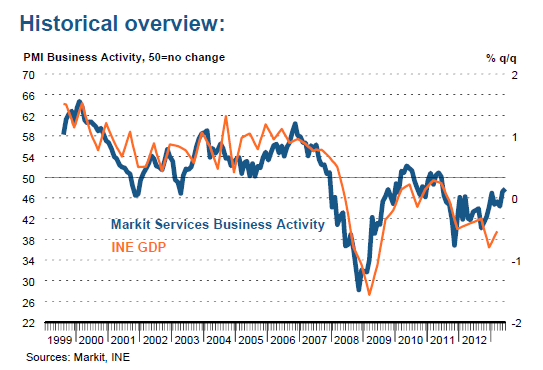 The blue line shows the index.  While it has been negative for over two years, recent moves show it rising, approaching the 50 line.  Also note that its level - while negative -- has been stable for the last 6 months.  I realize this is second derivative analysis, but that's how these type of trends start.

And Spanish manufacturing is now right at 50:

June provided further signs that the decline in the Spanish manufacturing sector is coming to an end.  New orders increased, driven by a marked rise in new business from abroad. Meanwhile, output, employment and purchasing activity all decreased at weaker rates.

The seasonally adjusted Markit Purchasing Managers’ Index® (PMI®) – a composite indicator designed to measure the performance of the manufacturing economy – posted 50.0 in June, signalling no change in business conditions during the month. This followed a reading of 48.1 in May, and ended a 25-month sequence of deteriorating operating conditions. 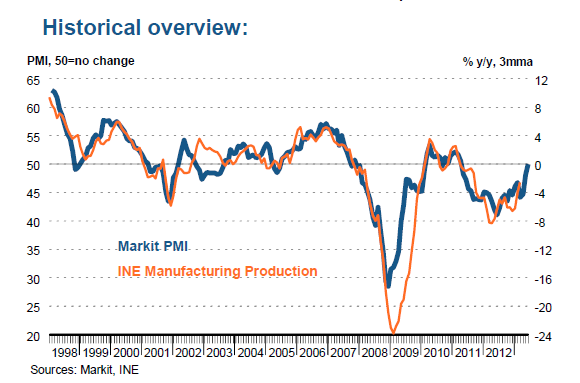 The chart shows a sharp increase over the last few months, which is a very encouraging sign.

The rise is largely the result of an export boon, caused by its lower labor costs:

For countless Spanish companies, and for the national economy as a whole, exports have emerged as the one bright spot in a country scarred by soaring unemployment and a plummeting demand from consumers, corporations and the government alike. Shipments of construction materials, car parts, Rioja wine, textiles, machinery and complex software are all booming, amid claims that Spain’s only hope of recovery is to export itself out of the crisis.

Recent data shows that Spain has indeed gained ground in world markets since the start of the crisis. Exports are now growing even faster than shipments from Germany, Europe’s economic powerhouse. According to the latest forecast by the European Commission, exports from Spain will grow by 4.1 per cent this year – the biggest increase of any country in the EU.

Spain’s exporting prowess looks even more impressive when viewed in the long term. Despite the economic rise of countries such as China, India and Brazil, Spanish exports as a percentage of world trade held almost steady between 1999 and 2012 – while those of the eurozone taken together fell from 33 per cent to 25 per cent.

There are still plenty of problems holding the economy back -- record high unemployment and a banking system that is still trying to stabilize.  This is shown in the latest leading and coincident indicator data: 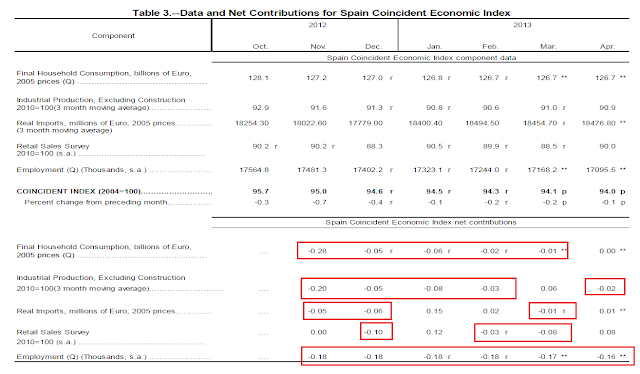 Notice the breadth and depth of the declines in the coincident indicators.  These are not encouraging and don't show much sign of a turnaround anytime soon.

The long-term trend in these charts is shown below: 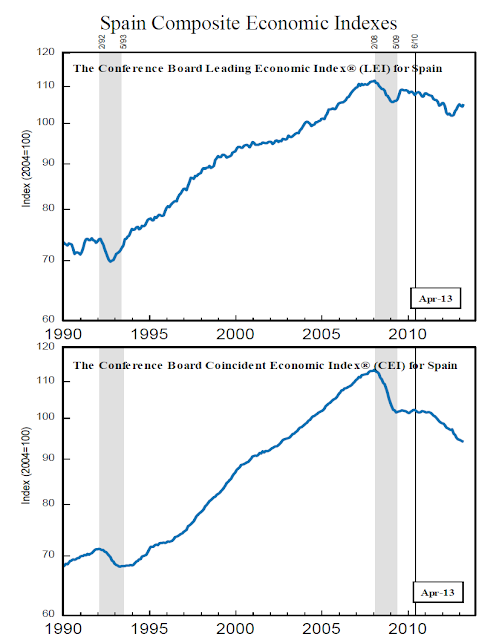 While the markit numbers are encouraging, they are all still in the early stages of the expansion.  In addition, the coincident economic indicates are extremely discouraging.  Let's turn to the Spanish ETF 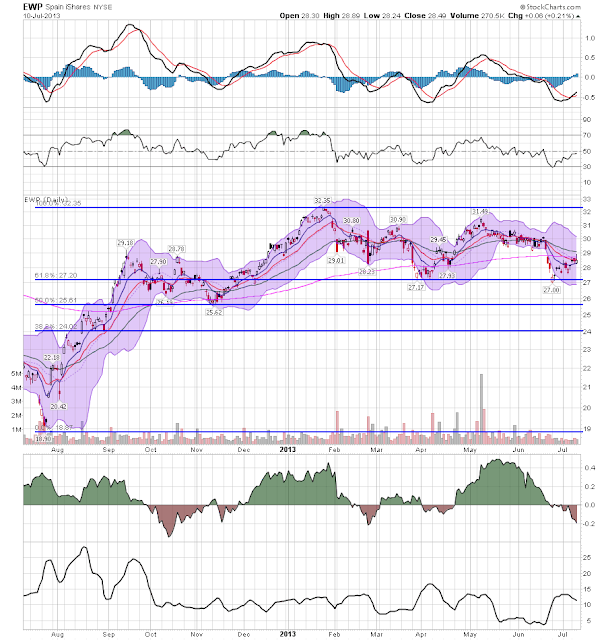 The Spanish ETF has been trading between 27 and 32 since the beginning of the year, using the 200 day EMA area as technical support.  The low interest rate environment is keeping equity shares high.  There really isn't much of a trade here unless the market moves below 27 or above 32.