Here are three items about June employment that you may not have seen elsewhere, and deserve wider exposure: 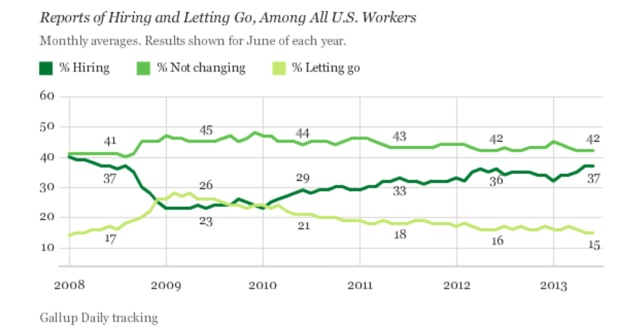 2. From Catherine Rampell of the NUY Times: that big increase in involuntary part time employed may not have been primarily about Obamacare at all. It may instead show the impact of the Sequester:

Not seasonally adjusted, almost 150,000 Federal workers became involuntary part-time employees, about 90,000 more than in either of the prior two years. The seasonal adjustment reduces about 20% of the number, which still leaves us with about 120,000 involuntarily part-time Federal workers, seasonally adjusted. That obviously isn't all of the number, but on top of the usual number, it may well be bigger than any other element of the newly part time in June.

3. Also from Catherine Rampell, the New York Times had an interesting graph, derived from the household survey, of what becomes of the newly unemployed during the next month: 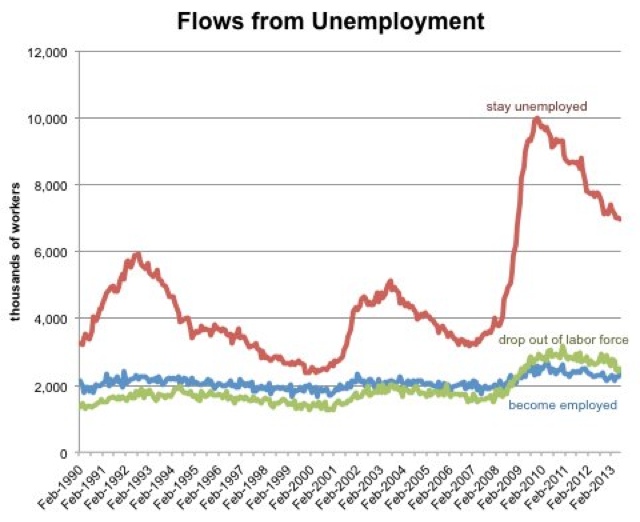 The number remaining unemployed is still far higher than the equivalent number during the recoveries after the last several recessions. The number getting employment quickly has still not returned to normal. These probably would be expected.

What was less expected is the relatively steep decline in those who simply drop out of the work force. This has almost returned to its pre-recession number and suggests that we are in the part of the cycle where the unemployment rate increases due to people re-netering the work force.
Posted by New Deal democrat at 11:30:00 AM