I've been following up with research as to the issue of stagnating vs. declining real wages. Last week I described 4 measures of real, inflation adjusted wages, three of which were average, or mean, measures, and one of which was a median. All 4 showed stagnating to slightly rising wages since the turn of the Millenium.

Meanwhile, last week Doug Short published a measure of "hypothetical" average real annual wages, by multiplying average wages adjusted for inflation for non-supervisory personnel by the average work week, and then again x 50 weeks. The measure is hypothetical because varying workweeks and layoffs can confound the data. But if we report on a monthly basis, those confounding issues almost totally disappear. Here's what real average monthly wages look like: 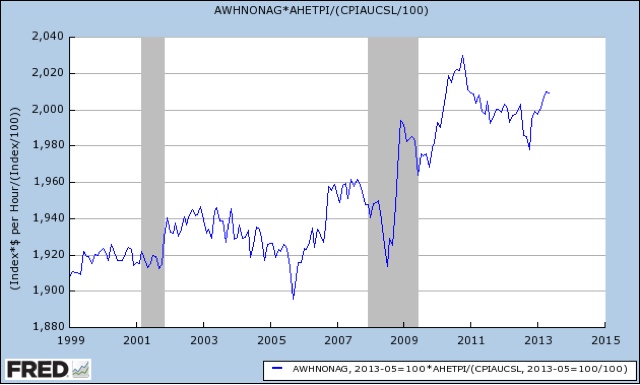 This shows that the average real weekly wage earned has also generally stagnated after rising during the great recession due to the sudden decline in gas prices in late 2008. The decline from late 2010 through late 2012 is again almost totally due to the subsequent rebound in gas prices.

But we still want to see what median wages look like, that is, the number where half of workers earn more, and half earn less. That will be the subject of my next post on the subject.
Posted by New Deal democrat at 11:30:00 AM