Recent news from the UK has been very encouraging, starting with the latest Markit Services report:

UK service sector growth accelerated to its highest level since March 2011 during June as incoming new business rose at a rate unmatched for six years. The sharp increase in new business led to a marked rise in backlogs of work, and encouraged companies to take on additional staff to the strongest degree since August 2007.

Confidence regarding future activity was also retained, with expectations at their highest for 14 months. However, margins remained under some pressure as strong competition prevented companies from fully passing on higher cost burdens.

After accounting for seasonal factors, the headline Business Activity Index recorded 56.9 in June, up from May’s 54.9 and the highest reading for 27 months. Growth has now been recorded for six successive survey periods, and has continually improved throughout this sequence. 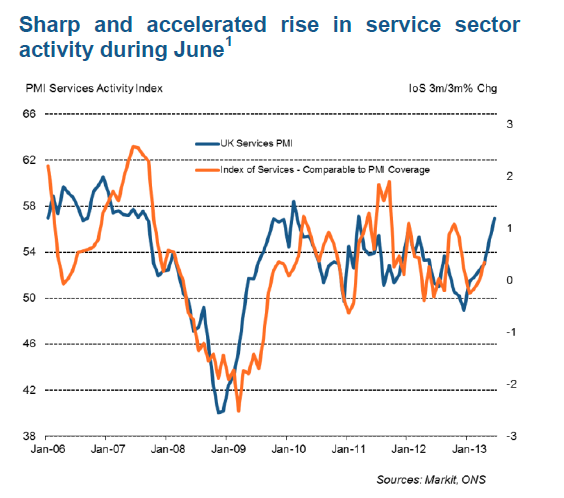 Since bottoming at the end of last year, the index has been in a strong uptrend.

The UK manufacturing sector maintained its solid second quarter performance into June, with levels of production and new business rising at the fastest rates since April 2011 and February 2011 respectively. Domestic market conditions improved further, while demand from overseas also strengthened.

At 52.5 in June, up from a revised reading of 51.5 in May, the seasonally adjusted Markit/CIPS Purchasing Manager’s Index® (PMI®) posted above the neutral mark of 50.0 for the third month running. Moreover, the rate of improvement signalled by the PMI was the steepest for 25 months. The average reading over the second quarter as a whole (51.4) was the highest since Q2 2011.

The latest expansion in UK manufacturing production was broad-based, with all of the sub-sectors covered by the survey signalling increases in June. The strongest rates of growth were recorded by the Textiles & Clothing and Food & Drink categories.

The accompanying chart shows this improvement: 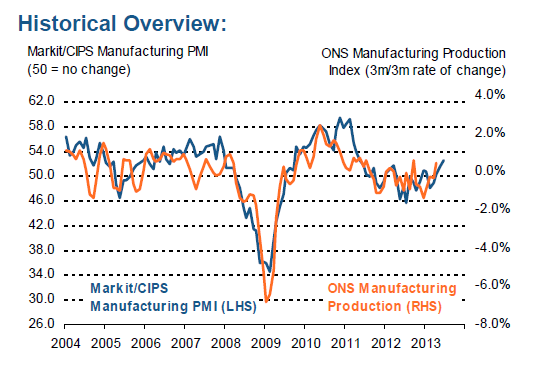 And the latest GDP reading was encouraging:

However, the Bank of England does not think the economy is out of the woods (nor should they).  Their latest policy statement kept rates at their currently low .5%.  They made the following observations:


Since the May Inflation Report, market interest rates have risen sharply internationally and asset prices have been volatile.  In the United Kingdom, there have been further signs that a recovery is in train, although it remains weak by historical standards and a degree of slack is expected to persist for some time.  Twelve-month CPI inflation rose to 2.7% in May and is set to rise further in the near term.  Further out, inflation should fall back towards the 2% target as external price pressures fade and a revival in productivity growth curbs domestic cost pressures.
At its meeting today, the Committee noted that the incoming data over the past couple of months had been broadly consistent with the central outlook for output growth and inflation contained in the May Report.  The significant upward movement in market interest rates would, however, weigh on that outlook; in the Committee’s view, the implied rise in the expected future path of Bank Rate was not warranted by the recent developments in the domestic economy.
While the latest data is encouraging, it is by no means indicates the economy is out of the woods.  Probably their biggest problem is the international economic environment which is poor: the EU is still in a recession and China is re-balancing its economy.  While the US is growing, it's not growing at a strong rate.