Japan's consumer prices rose in June for the first time in more than a year, a positive sign for the government's battle against deflation, but the rises centered on higher electricity bills rather than stronger demand that could drive a durable recovery.

Core consumer prices rose 0.4 percent in June from a year earlier, higher than a median market forecast for a 0.3 percent increase, largely due to higher electricity bills and gasoline prices.

Japan's energy prices have been rising as a weaker yen has boosted the cost of imported fuel needed to make up for the closure of almost all the nation's nuclear reactors after the March 2011 tsunami.

"Such cost-push inflation should not be taken as particularly positive," said Yasuo Yamamoto, senior economist at Mizuho Research Institute. Market participants "are skeptical about the prospects for a steady pickup in inflation, with service-sector firms struggling to pass on costs to consumers due to a persistent output gap."

"If you look at a narrower basket of goods without energy, the clear rising trend isn't there yet and we can't say with great confidence that Japan is clearly on its way out of deflation," said Koichi Fujishiro, economist at Dai-ichi Life Research Institute in Tokyo.

Short version: it's a start.

Here is a link to the Japanese CPI numbers from their statistical bureau.

Most importantly, the rise in inflation is a direct result of the BOJs plan to drop the yen's value.  Consider this long-term chart of the yen's ETF: 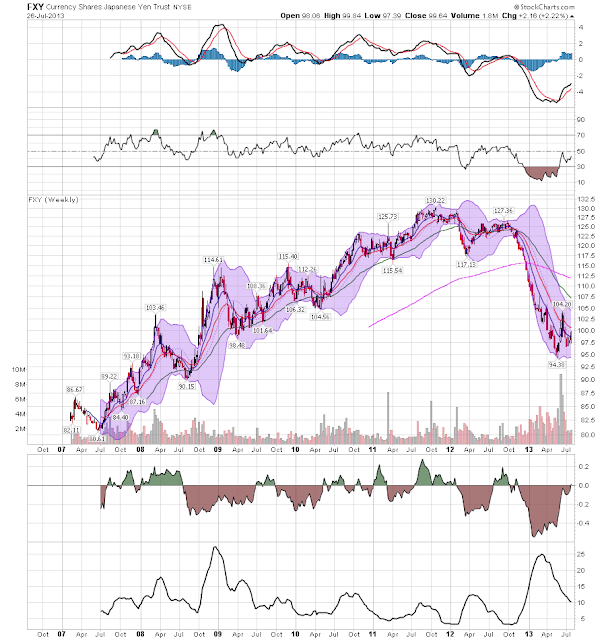 The yen was in a clear uptrend from 2007 until the end of 2011 -- this despite the obvious weakness of their economy.  The first reason is the yen was part of the carry trade -- people would borrow in yen because of their ultra low rates and then invest in another currency, pocketing the difference.  After the Great Recession, the yen became a safe haven.  But either way, a currency that should have been dropping in value because of the fundamental weakness of the underlying economy was rising.

Now it appears the yen is probably closer to "fair value" given the weakness of the Japanese economy.

In addition, Abe's party swept the most recent elections, giving them a strong mandate to continue their policies:

Japanese Prime Minister Shinzo Abe, fresh from a strong election victory, vowed on Monday to stay focused on reviving the stagnant economy and sought to counter suspicions he might instead shift emphasis to his nationalist agenda.

The victory in parliament's upper house election on Sunday cemented Abe's hold on power and gave him a stronger mandate for his prescription for reviving the world's third-biggest economy.

At the same time, it could also give lawmakers in his Liberal Democratic Party (LDP), some with little appetite for painful but vital reforms, more clout to resist change.

"If we retreat from reforms and return to the old Liberal Democratic Party, we will lose the confidence of the people," Abe told a news conference on Monday.

He emphasized that his priority remains proceeding with his "Abenomics" program of hyper-easy monetary policy, government spending and economic reform, describing it as the cornerstone of other policy goals.

Let's take a look at the Japanese ETF to see how it's fared: After peaking in late May, the ETF fell to the 200 day EMA and rallied again to just shy of the previous peak.  The ETF has dropped over the last few days in reaction to weak news coming out of China.  It still appears that the Japanese market is consolidating gains made in the post Abe run-up.