Market/Economic Analysis: US; More of the Same "Moderate" Recovery

The Kansas City Fed index rose to 6.  Most importantly, the internal numbers on production and shipments rose sharply.  Additionally, the Markit flash estimate increased from 51.9 to 53.2, which included some strong growth in internal numbers. 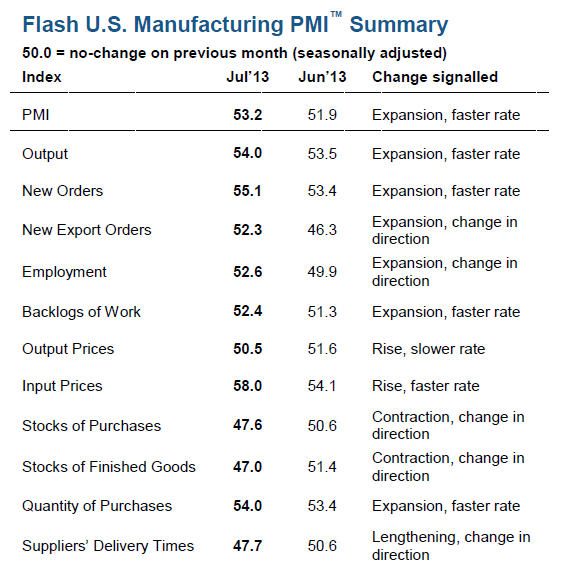 New home sales increased 8.3% from the previous month.  However, keep an eye toward the next 3-5 readings for this number.  The spike in this reading could reflect higher interest rates pulling sales forward, but we won't know until we see a few more months of data.

From the Chicago Fed: The index’s three-month moving average, CFNAI-MA3, increased to –0.26 in June from –0.37 in May, marking its fourth consecutive reading below zero. June’s CFNAI-MA3 suggests that growth in national economic activity was below its historical trend. The economic growth reflected in this level of the CFNAI-MA3 suggests subdued inflationary pressure from economic activity over the coming year.

I've placed this reading in the neutral category because it indicates the economy is growing below its overall economic growth potential.

Existing home sales decreased 1.2% last month.  This is a neutral reading as it may indicate that higher interest rates area starting to slow the real estate recovery.  However, this is only one month of data, so we obviously can't be sure on that.

The Richmond Fed's manufacturing index fell 18 points to -11.  Production and new orders also declined.  It should be noted the Richmond Fed's index has shown depressed readings relative to other Fed numbers for the last few years.

Conclusion: the best news came in the Markit report, which showed an improvement in the manufacturing environment.  But more importantly, the internals show a good possibility for a continued improvement in the coming months.  The housing numbers are a bit concerning as both may indicate we're starting to see higher rates impact purchases.   But we we don't have enough data to make a solid call in that area.  Finally, the Chicago Fed number merely concerns that regardless of the news we get, the economy is still operating below potential.

Let's turn to the markets, starting with a long-term view of the SPYs: 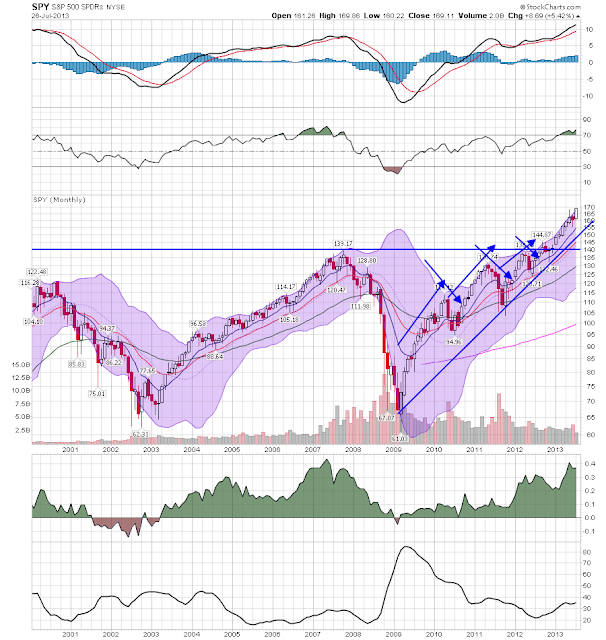 The monthly chart shows that we're clearly in new technical territory.  At the end of last year, the market hit resistance around the 139 level -- the previous high from the 2003-2007 rally.  After stalling there at the end of last year, prices have made a strong push higher.  The underlying MACD and CMF support a continued move higher. 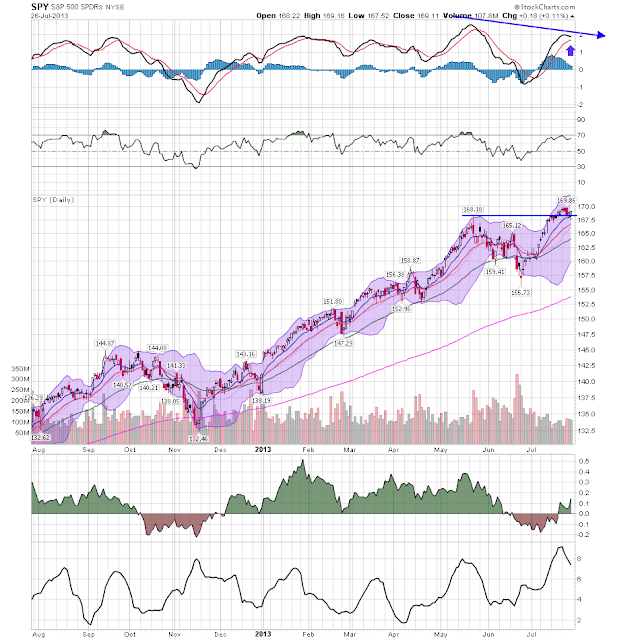 The daily chart shows that prices may be consolidating.  The most recent push higher is characterized by weak candles (small bodies) on lower volume.  While the most recent peak is technically higher than the peak in late May, it's pretty insignificant technically.  Most importantly, the MACD is currently declining and close to giving a buy signal.  In addition, the MACD appears to be declining. 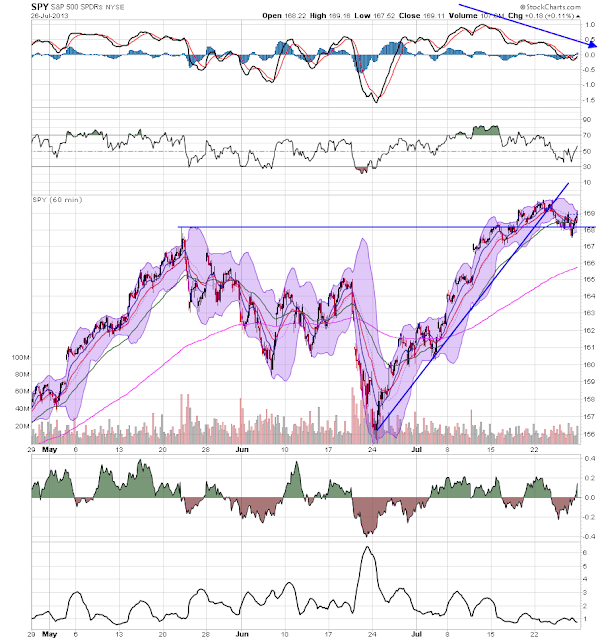 When the daily chart SPY analysis is combined with the above 60 minute chart, it shows that next week's most likely direction is consolidation or lower.  Prices above have broken trend from the June 24-July 23 rally and are tight at technical support established in mid-June.  The MACD is declining. 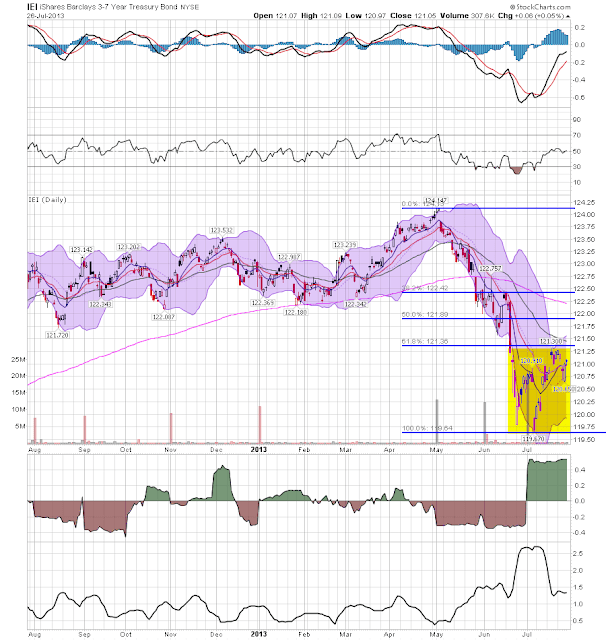 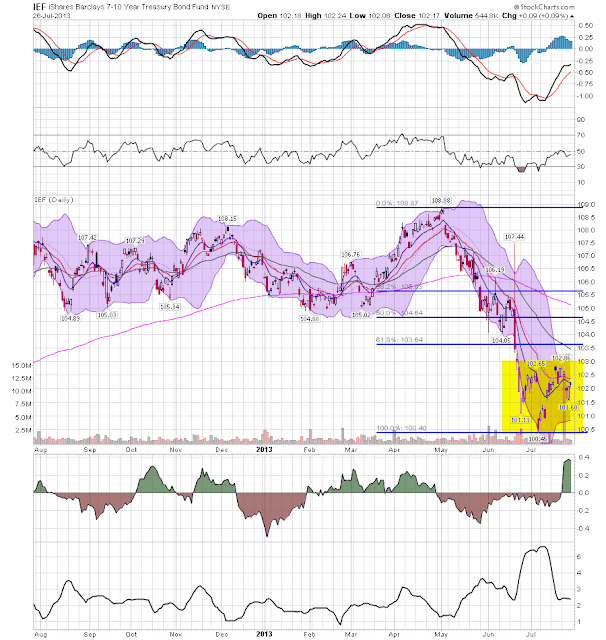 The belly of the treasury curve (the IEIs and IEFs) are consolidating their recent sell-off.  While both have a rising MACD, the indicator is still negative indicating weak momentum.  The key level for the IEIs is 119.5 and the IEFs 100.5. 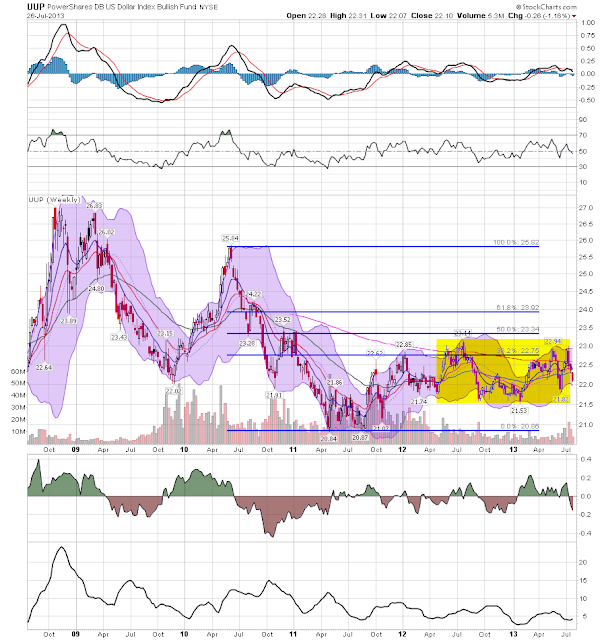 The week ahead: we're in the middle of the summer doldrums, so barring a cataclysmic event, trading will be weak.  While there is a Fed announcement this week, I'm not anticipating a major change in their statement.
Posted by Unknown at 6:00:00 AM