South Korea’s economy grew the most in more than two years, on stronger government spending and private consumption even as a slowdown in China clouds the outlook.

Gross domestic product rose 1.1 percent in April-to-June from the previous quarter when it rose 0.8 percent, the Bank of Korea said today in a statement in Seoul. That was above the median 0.8 percent estimate of 13 economists surveyed by Bloomberg News. From a year earlier, Asia’s fourth-largest economy expanded 2.3 percent.

Let's take a look at the underlying data from the South Korean Central Bank's GDP release:

Consumer spending increased at its strongest rate since 1Q12, posting a 1% increase.  This is the second strongest growth rate in the last 10 quarters.  A big reason for this increase was the 2.4% increase in government spending -- which is the direct result of recent stimulus moves by the government.  While investment was down, it was still positive.  And exports also printed a decent number -- although the slowdown in China is obviously having an impact.  As noted the the Bloomberg article above:

Slower growth in China is “a major risk” to South Korea’s outlook, given Korea’s manufacturing sector has significant trade and investment exposure to the world’s second-biggest economy, said Ma Tieying, an economist at Singapore-based DBS Group Holdings Ltd. The preliminary China Purchasing Managers’ Index fell to 47.7 in July from 48.2 in June, further below the level of 50 that separates contraction from expansion, HSBC Holdings Plc and Markit Economics said yesterday. 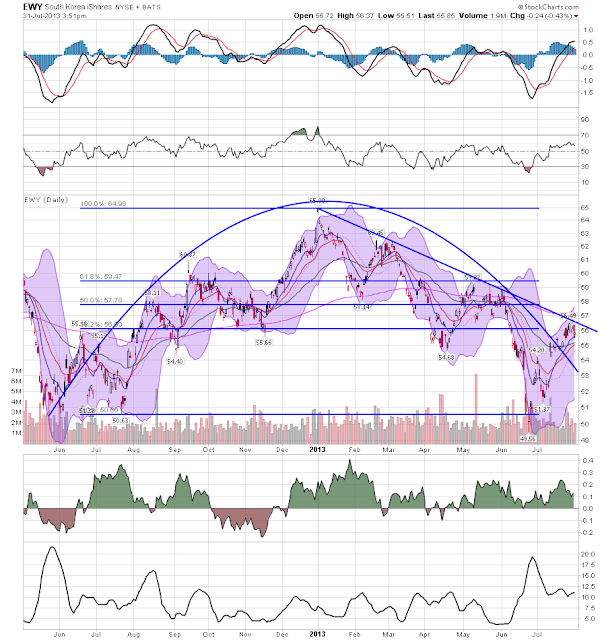 Over the last year and three months, the South Korean market has done a perfect, round-trip route.   Notice that on the sell-off we see a great deal of discipline -- there isn't a great crash, but instead a very measured move lower.  This tells us there is simply a bit more bearish sentiment in the SK market right now, but it certainly isn't an overwhelming, bar the door sell off.