While most commentary yesterday was about how 2nd quarter GDP beat expectations, the trend over the last three quarters is very concerning. The business cycle algorythm James Hamilton uses at Econbrowser was updated to register a 30% chance of recession after Q1. That isn't enough for him to believe a recession has begun, but since we are four months past that, it isn't exactly reassuring. Here's the updated graph of GDP for the last 10 years: 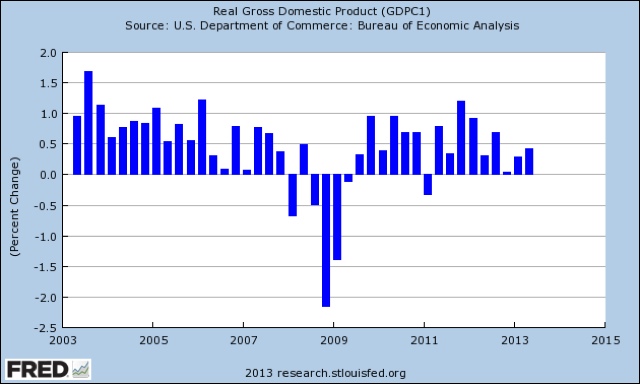 This is an economy just barely shambling along, similar to what we saw at the end of 2006 and beginning of 2007.

What is particularly disheartening is the contractionary role government is playing in this. Here's the input of the private sector and government sector for the last 3 quarters:


If government's contribution were simply zero as opposed to outright contraction for the last three quarters, GDP would have grown over that period at an annual rate of +1.6% - hardly great but at least palpably positive - vs. the actual +1.0% annualized that we've had.

There is going to be another debt ceiling debate this autumn. That's on top of the payroll tax increase that went into effect on January 1, and the ongoing Sequestration. Most likely there will be some sort of compromise with even more cuts in spending. I'm really not sure at all that the economy can handle even more cuts without actually tipping into a contraction.

In such a case, by the way, I wouldn't expect leading indicators to lead by much. For many of these indicators 1974 (Oil embargo) and 1981 (Fed hiking rates precipitously) stand out as times when very little lead time was given between indicators turning and the recession beginning.
Posted by New Deal democrat at 9:00:00 AM