From the Office of National Statistics:
Here are relevant charts from the report:

The above chart shows two important points.  First, total GDP is still below pre-recession levels (the red line).  This was caused by an incredibly weak economy, which is caused by the weak growth in the Q/Q area.  The UK has had periods of negative growth since the end of the recession, highlighting how fragile their economy has been. 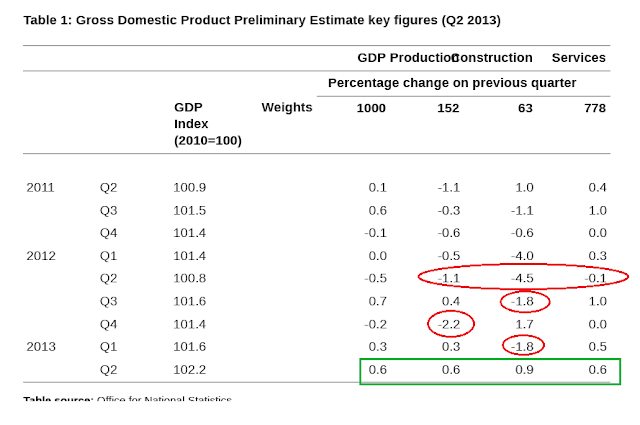 The above chart shows two important developments.  First, in the latest quarter production, construction and services all contributed to growth.  Additionally, each sector contributed in a meaningful way.  Compare the most recent quarters performance to the previous four quarters where at least one area contracted, leading to the slower growth.

In addition, the latest Markit indicators show an economy about to expand.

UK service sector growth accelerated to its highest level since March 2011 during June as incoming new business rose at a rate unmatched for six years. The sharp increase in new business led to a marked rise in backlogs of work, and encouraged companies to take on additional staff to the strongest degree since August 2007.

Confidence regarding future activity was also retained, with expectations at their highest for 14 months. However, margins remained under some pressure as strong competition prevented companies from fully passing on higher cost burdens.

After accounting for seasonal factors, the headline Business Activity Index recorded 56.9 in June, up from May’s 54.9 and the highest reading for 27 months. Growth has now been recorded for six successive survey periods, and has continually improved throughout this sequence. 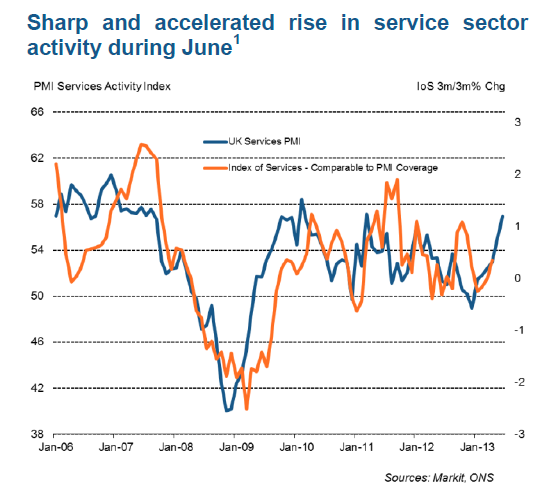 That's a strong rise, and one that indicates an economy with some momentum for growth.

And manufacturing appears to have the same bullish qualities:

The UK manufacturing sector maintained its solid second quarter performance into June, with levels of production and new business rising at the fastest rates since April 2011 and February 2011 respectively. Domestic market conditions improved further, while demand from overseas also strengthened.

At 52.5 in June, up from a revised reading of 51.5 in May, the seasonally adjusted Markit/CIPS Purchasing Manager’s Index® (PMI®) posted above the neutral mark of 50.0 for the third month running. Moreover, the rate of improvement signalled by the PMI was the steepest for 25 months. The average reading over the second quarter as a whole (51.4) was the highest since Q2 2011.

The latest expansion in UK manufacturing production was broad-based, with all of the sub-sectors covered by the survey signalling increases in June. The strongest rates of growth were recorded by the Textiles & Clothing and Food & Drink categories. 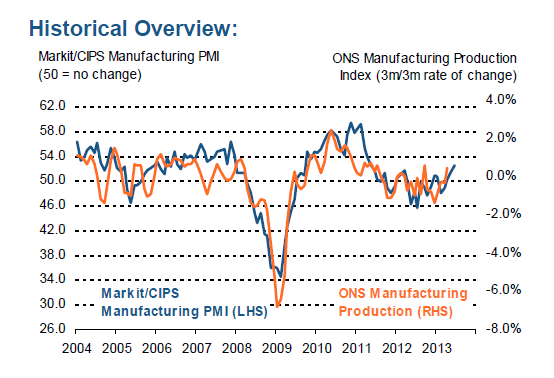 Let's take a look at the ETF chart for the UK market: 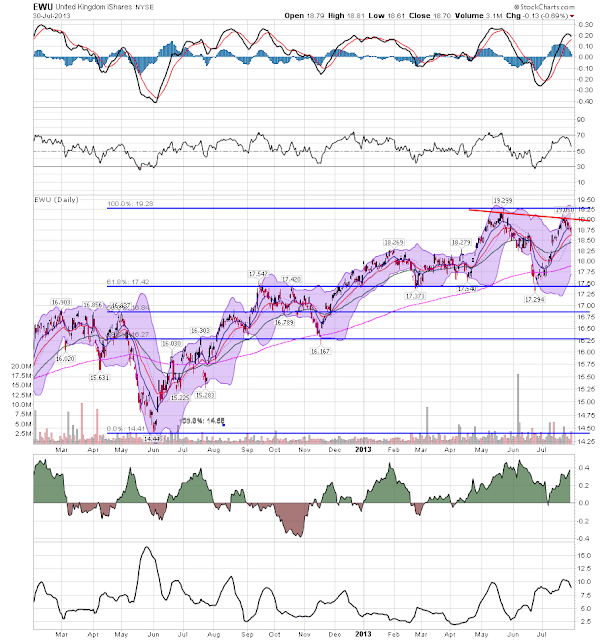 Since early June of last year, prices have been rallying and have been using the 200 day EMA as technical support, hitting that level twice.  There have been several periods of consolidation.  The market recently hit a peak just below the mid-May peak.  I've drawn a red line connecting these peaks.  My guess is we're starting to see some consolidation from the year long rally. 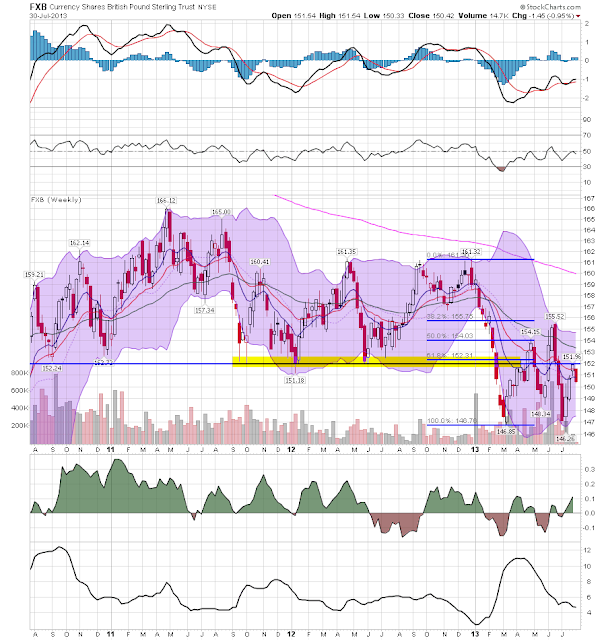 The pound is still trading at very low levels on the weekly chart; prices are just above three year lows, indicating traders still view the economy as weak.  Ultra-low interest rates are not helping in this matter.