OK -- it's been a few days, and in the meantime the markets have decided to hyperventilate about the Bernanke presser.  So, let's take a minute to look at exactly what he said and what it means.

Starting about 4:30, Ben explains the two programs the Fed is using.  The first is interest rate policy, which is still going to be low for a long time.  Here's the exact wording from the Fed statement: In particular, the Committee decided to keep the target range for the federal funds rate at 0 to 1/4 percent and currently anticipates that this exceptionally low range for the federal funds rate will be appropriate at least as long as the unemployment rate remains above 6-1/2 percent, inflation between one and two years ahead is projected to be no more than a half percentage point above the Committee's 2 percent longer-run goal, and longer-term inflation expectations continue to be well anchored.

So, we have a three-pronged set of factors to use when evaluating when rates may increase: unemployment about 6.5%, future inflation is lower than 2.5% and inflation expectations are well anchored.  Ben specifically notes these are thresholds, not targets, so even if we do hit those targets, rates could stay low.

Let's turn to the asset purchase program, which he starts explaining at 8:00.  Currently, the Fed is purchasing assets at the following monthly pace: $45 billion in Treasuries and $40 billion in agencies.  The fed may moderate this later in the year, with the potential to end the program by next summer.  He notes the pace is not predetermined, but instead is highly dependent on incoming economic information.  If the economy improves, the pace will quicken; if the economy slows, the pace will slow or the program will end entirely. 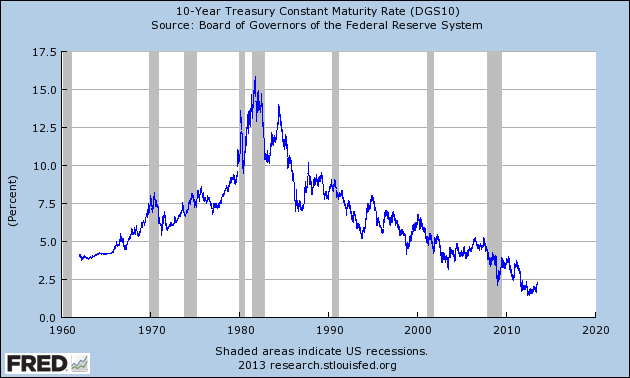 The 30-year bull market in bonds is still intact.  We do see a slight uptick on the long-term chart, which is better analyzed using a shorter time frame: 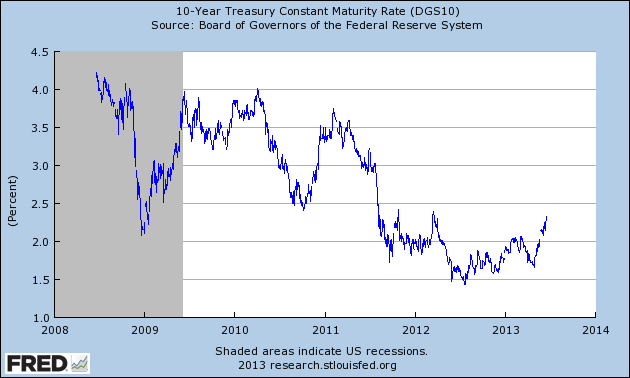 Rates have moved about 2% and are now approaching 2.5%.  While this rate is still low, that lowness is relative.  In comparison to our recent rate experience, it's actually getting high.

Also note the Fed will continue to reinvest maturing principle (see statements beginning at 9:30).  This could be a key point, as the Fed may think they have enough financial ammunition already on their books to keep rates low.

For more on the overall effect, see NDDs piece below.

Now let's entertain the question of whether or not this is a good idea right now, starting with an obvious although overlooked point: asset purchases have to end sometime, it's a matter of when.  Now -- is this time the appropriate time?  Ben notes that unemployment has dropped since the plan was initiated.  He also sees current moderate growth.

Here's where I think he makes a big mistake, quoting from the Fed release. The Committee sees the downside risks to the outlook for the economy and the labor market as having diminished since the fall.  I don't think this is the case at all.  Consider the following points.

The fed admits that we're facing fiscal headwinds thanks to the bozos in Washington ("fiscal policy is restraining economic growth.").  Manufacturing is slowing thanks to a slow international environment and general tentativeness domestically.  One of the key bright spots in the economy is housing, which the Fed's move will hurt by increasing interest rates.  Wages aren't going to meaningfully increase in a 7.5% unemployment environment and refis -- which have been proving a fair amount of the financial fuel for consumer purchases (see NDD below) -- are going to drop in a higher rate environment.

And the international environment is terrible.  The EU -- which is the second largest economic region after the US -- is in a depression.  China is clearly slowing, which is having a pronounced negative effect on the developing world.   The three other BRICs are all experiencing their own problems: India has slower growth, high current account deficits, systemic political paralysis and high inflation.  Brazil's growth is slowing and their inflation in far higher than preferred, meaning their central bank can't lower rates to stimulate growth.  And Russia is fast becoming a basket case.

In short, I think the Fed is dropping the ball on this one.