The May 2013 Empire State Manufacturing Survey indicates that conditions for New York manufacturers declined marginally. The general business conditions index fell four points to -1.4, its first negative reading since January. The new orders index also edged into negative territory, and the shipments index fell to zero. The prices paid index declined eight points to 20.5, indicating a slowdown in selling price increases, while the prices received index was little changed at 4.6. Employment indexes were mixed, showing both a modest increase in the number of employees and a slight decline in the length of the average workweek. Indexes for the six-month outlook were generally lower, suggesting that optimism about future conditions had weakened.

And  the latest Philadelphia Fed Report:

The survey’s broadest measure of manufacturing conditions, the diffusion index of current activity, decreased from 1.3 in April to -5.2 this month. The current activity index has shown no pattern of sustained growth over the past seven months, generally alternating between positive and negative readings (see Chart). The number of firms reporting decreased activity this month (29 percent) edged out those reporting increased activity (24 percent).

In May, the seasonally adjusted composite index of manufacturing activity — our broadest measure of manufacturing — gained four points settling at −2 from April's reading of −6. Among the index's components, shipments recouped seventeen points to 8, the gauge for new orders slipped two points to finish at −10, and the jobs index subtracted six points to end at −3.

We also see this slowdown in the overall industrial production numbers coming from the Federal Reserve. 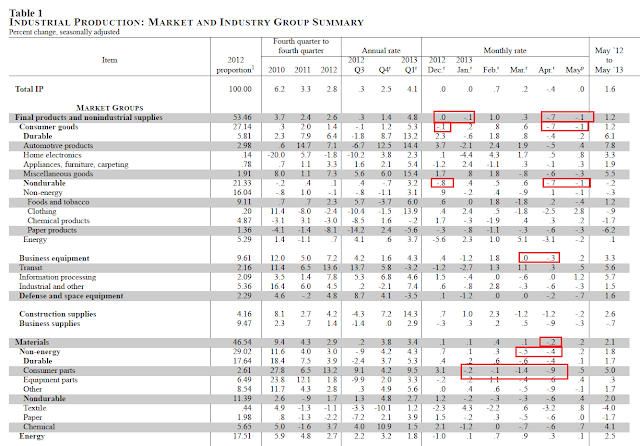 Let's look at the anecdotal reports from the latest ISM report to get some more insight into this section of the economy:
Summing up the information we get the following points:
In addition, consider the excess capacity in the system:

In another sign of recent weakness in the manufacturing sector, capacity utilization in the US has stalled, as demand remains soft. US industries are producing significantly below their capacity and "5.5 percentage points below long-run average" according to the Fed. We are certainly far under the 82-85% level at which economists believe that the traditional measures of inflation are expected to rise.
The sky is not falling.  But things are definitely grinding lower.
Posted by Unknown at 6:00:00 AM