China has been one of the primary economic drivers of the last 10-15 years; it is the primary force in the "south-south" trade, where raw material exporters (Australia, Canada, most of South America) sell their raw materials to China who then converts them into final products for shipment to the west.  However, China's growth is slowing.  Consider the following data points released since June 1:

After adjusting for seasonal factors, the HSBC Purchasing Managers’ Index™ (PMI™) – a composite indicator designed to provide a single-figure snapshot of operating conditions in the manufacturing economy – posted at 49.2 in May, down from 50.4 in April. This signalled the first deterioration in operating conditions in seven months, albeit at only a marginal pace.

Despite operating conditions worsening, manufacturing output rose for the seventh month in a row during May, albeit marginally. Behind the meagre expansion of output, total new orders declined modestly and for the first time since last September. Demand from abroad also weakened over the month, with new export orders falling for the second month in a row. A number of panellists suggested reduced client demand, particularly in the US,

Here's a chart of the relevant data: 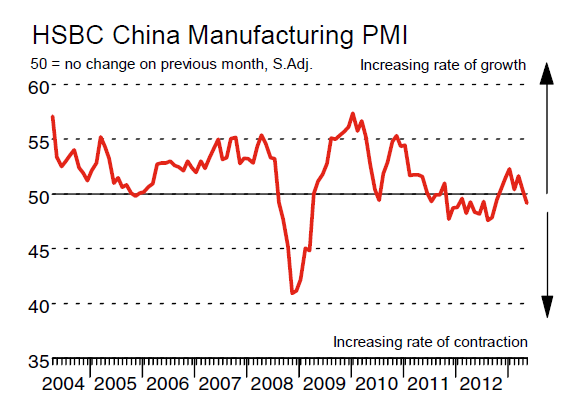 Note that the index spent most of 2012 below 50, indicating contraction.  Now traders are concerned we're seeing that trend start again.

Output continued to expand across both the manufacturing and service sectors for the seventh consecutive month in May. However, production at manufacturing plants rose at the weakest pace since October 2012 and business activity at service providers increased at a modest pace. The latter was signalled by the HSBC China Services Business Activity Index, which posted 51.2 in May. This was broadly unchanged from April’s 51.1 and was one of the lowest readings in the series history.

Total new orders were relatively unchanged in May at the composite level, with sector data indicating differing trends. New work intake at manufacturing plants fell modestly over the month and for the first time since last September, while new business increased at service providers. However, the rate of growth was modest and remained historically weak in the service sector. 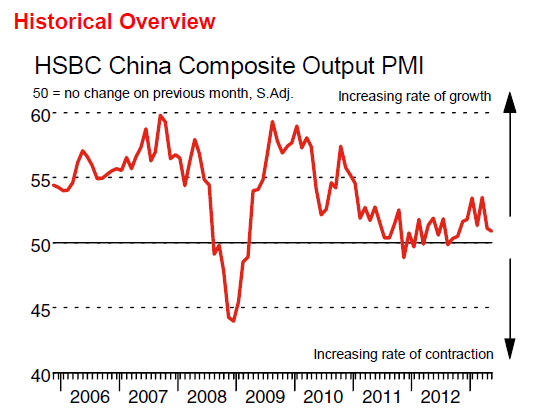 While still positive,  we've seen a few months of lower prints.  This is hardly fatal, as this sector hasn't meaningfully contracted in over two years.  But it is something to keep your eye on.

Other recent data prints have also disappointed.  From Bloomberg:

China’s trade, inflation and lending data for May all trailed estimates, signaling weaker global and domestic demand that will test the nation’s leaders’ resolve to forgo short-term stimulus for slower, more-sustainable growth.

Industrial production rose a less-than-forecast 9.2 percent from a year earlier and factory-gate prices fell for a 15th month, National Bureau of Statistics data showed today in Beijing. Export gains were at a 10-month low and imports dropped after a crackdown on fake trade invoices while fixed-asset investment growth slowed and new yuan loans declined.
.....

Industrial production compared with the median estimate for a 9.4 percent increase, with growth the weakest for a January-May period since 2009. Fixed-asset investment excluding rural areas rose 20.4 percent in the first five months from a year earlier, down from a 20.6 percent pace in January-April, statistics bureau data showed. May’s retail-sales growth of 12.9 percent matched the median projection of analysts.

“This shows the real state of the Chinese export situation,” said Shen Jianguang, chief Asia economist at Mizuho Securities Asia Ltd. in Hong Kong. The data give a “pretty depressed” picture, with weak external demand and a yuan that has appreciated substantially against a trade-weighted basket of currencies, said Shen, who previously worked at the European Central Bank.

Bear in mind that China needs rapid growth because of two inter-related factors: the world's largest population and its GDP per capita.  In order to create a large enough economic "pie" to spread out over its population and thereby raise people out of poverty, we need to see strong growth figures.  That's why industrial production prints of 9.4% are concerning to economists.  Now, let's also stipulate the Chinese slowdown is "relative" and no one is predicting a crash. These are still good numbers; they just indicate things are slowing relative to what we've seen.

But most importantly is that the traditional policy avenues to increase growth aren't there.  From the Financial Times:

The concern about China’s slowdown is grounded partly in the speed with which credit is growing in China. The figure for total lending, which includes the non-banks as well as the banks, hit nearly Rmb8tn ($1.3tn) in the first four months of the year, significantly higher than the Rmb4.85tn for the same period a year ago, according to JPMorgan. Today, China’s total credit is almost double its gross domestic product.

But more worrying is the declining efficacy of that credit. The amount of capital being put to work is swelling, but the productivity of that capital is plummeting. Five years ago, a dollar invested produced a dollar of GDP growth. But today it takes $3 to $4 of investment to produce a dollar of output – and the quality of that output is suspect. There is overcapacity across many Chinese industries, from shipbuilding to solar.

The decreasing efficacy of Chinese lending is a policy problem, because this is the preferred method for the Chinese government to goose economic growth.

The short version of the above data points is it is becoming more and more apparent that the Chinese growth story is changing.  And that has tremendous ramifications for the rest of the world. 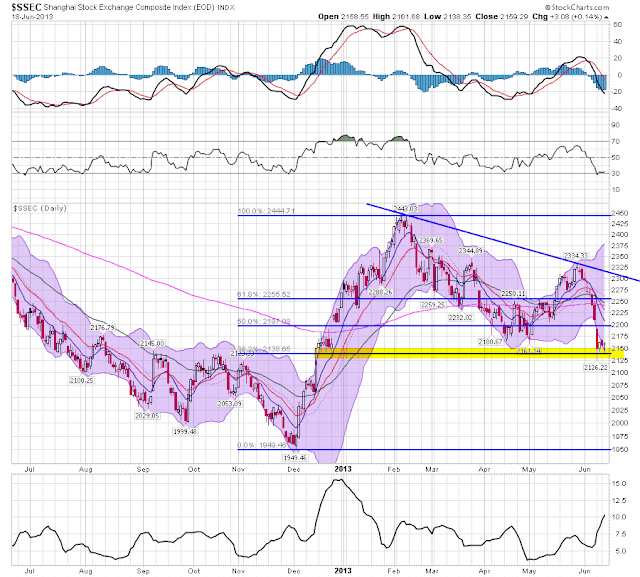 The Chinese market is consolidating in a descending triangle formation, with the top part of the triangle connecting the early February and last May highs and the lows established on the 38.2% Fib level.  A break of the 2150 level would indicated a move lower.  Also note that prices are below the 200 day EMA with the shorter EMAs moving lower.