From the latest Minutes of the Colombia Central Bank on May 31:

The latest information on the performance of the economy in the first quarter of 2013 suggests that this slowed down in comparison to what had been seen at the end of last year as was predicted in earlier reports.  The indicators for that period are influenced by the lower number of working days in February and March.

In the first quarter of the year, household consumption grew at rates that were slightly lower than the ones registered in the fourth quarter of 2012.  According to the figures from the Retail Monthly Sample (MMCM in Spanish) published by DANE in March, the annual growth of sales was 0.9% in the first quarter (less than the 3.3% for the last quarter of 2012).  This performance could be explained by an annual drop in the sales of vehicles (-11.4%).  In contrast, sales of other goods grew 4.0% in the first three months of the year.

With regards to the supply indicators, the news shows mixed performance.  Production of coffee continues to expand at favorable rates.  Energy related mining showed positive growth in petroleum production while coal production was affected by labor problems and environmental penalties.  The industrial sector registered significant deterioration during the quarter.  In March, the index of industrial production excluding threshing shrank 11.5% in annual terms.  Based on this rate, industrial production showed an annual contraction of 6.0% in the first quarter.

So households are still spending, albeit at slower rates.  The real problem is in industrial production.  This exact same situation is playing out in the US.

As a result, the central bank has been cutting rates for stimulate growth:

Colombia sure likes to keep the markets on their toes.

On Friday, the country cut its benchmark interest rate for the fifth consecutive month. While previous cuts came in at 25bps increments, the central bank took out the axe this time around and chop rates by 50bps to 3.25 per cent – the lowest in Latin America.

So, let's take a look at the Colombia ETF's daily chart: 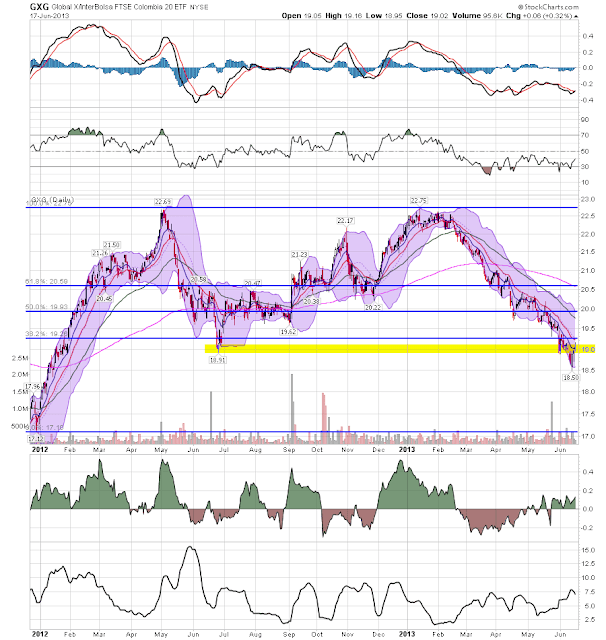 Since the beginning of February, the market has been moving lower.  But remember that this move lower has been very disciplined.  There has not been a massive volume spike indicating a selling climax.  Instead we see a nice pattern of lower lows, followed by consolidation, followed by another disciplined move lower.  Prices are below the 200 day EMA are are using the 10 and 20 day EMAs as technical resistance.  While the CMF is indicating some volume moving into the market, momentum is negative. 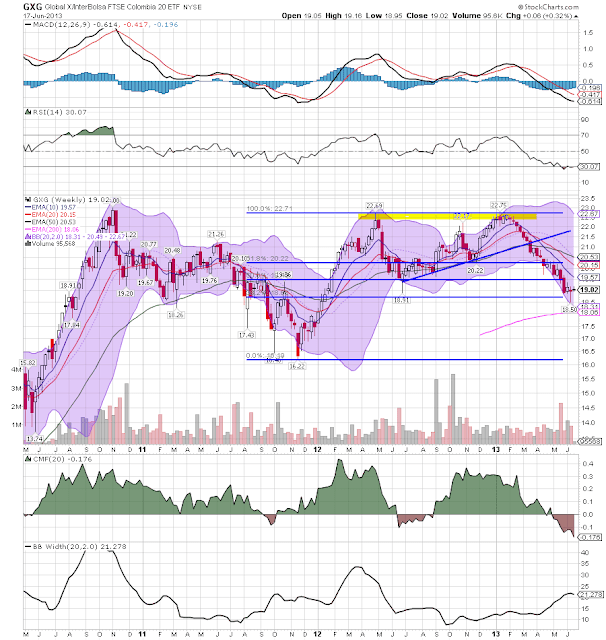 The weekly chart shows that the current price level is around the 38.2% Fib level for the 4Q11-1Q13 price move. While we do see a slight uptick in volume over the last few months, it does not indicate a selling climax.