From the latest SK GDP report:

First, we see a nice bump in GDP during the first quarter with the .8% Q/Q print.  But notice the big change in the composition of growth.  PCEs declined .1%.  To make up for the loss, we see increases in in capital formation  of 3.8% and exports of 3%.

Let's look at this data on a year over year basis: 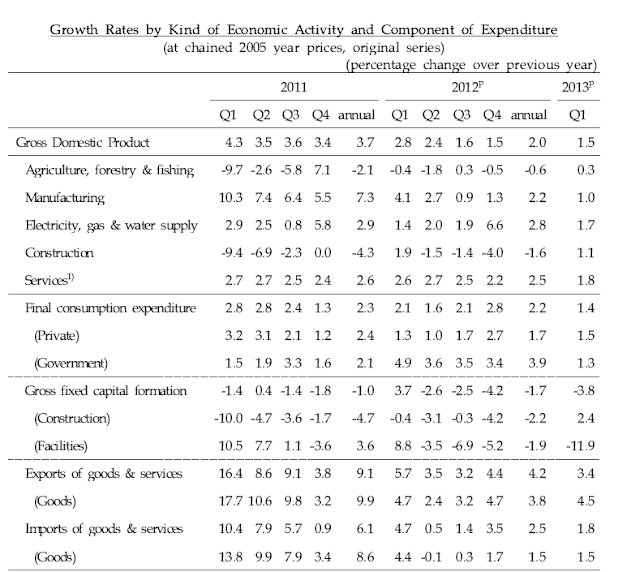 The real issue on the year over year basis is the drop in facilities investment, which contracted at a very sharp 11.9% reate.  PCEs are also weak at 1.5% which is partially explained by the high level of household debt that currently stands at 160% of annual incomes.  Government spending is also weak at a 1.3% increase.

As a result of slower growth, the government has issued a supplementary budget to stimulate the economy:


South Korea unveiled a Won17.3tn ($15.4bn) supplementary budget on Tuesday to support the stalling economy, as domestic consumption remains sluggish while exports slow because of the weaker yen and cooling global demand.
The supplementary budget was larger than expected, mainly because it contained plans to raise debt to make up for anticipated tax revenue losses resulting from the slowing economy, and delays to the attempted sale of state holdings in two banks.

Also causing problems is the South Korean's dependence on exports, which the Central Bank noted in their latest policy announcement:

In Korea, consumption and facilities investment have declined but the Committee appraises economic growth to be continuing, albeit weakly, as exports have improved and construction investment has increased to a great extent. On the employment front, the number of persons employed has increased, centering around the 50-and-above age group and the service sector. Due to a slowdown in the uptrend in employment in the manufacturing sector, however, the increase was smaller in May than in the previous month. Going forward there is no change to the Committee’s forecast that the domestic economy will show a negative output gap for a considerable time, due mostly to the slow recovery of the global economy.

There are no signs of an imminent collapse.  But it does appear the SK economy is entering a slow growth phase.

Let's take a look at the South Korean ETF: 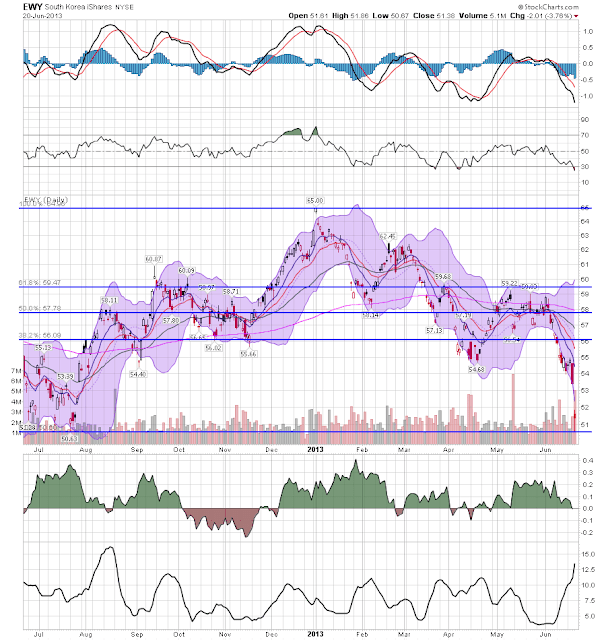 Over the last week, prices have fallen to near nearly lows on a declining momentum and CMF reading.  The strong moves lower over the last few days are all the result of the Fed tapering talk.  The rest is about a slowing economy.
Posted by Unknown at 6:00:00 AM