The beginning of a sea change in household deleveraging

The Federal Reserve's report on household debt burdens was released earlier this week covering the January - March quarter. I have been watching these series since before the Great Recession. Indeed, when household debt burdens started to decline, that was one of the final signs that the Recession was about to start. Further, I long suspected that, before this cycle was over, households would set new all time lows for debt service. With the exception of one quarter in 1980 (as to total financial obligations), that happened in the final quarter of last year.

First, a refresher. According to the Federal Reserve,

I've combined the two measures into a single graph. Total financial onligations are in blue and debt service payments are in red: 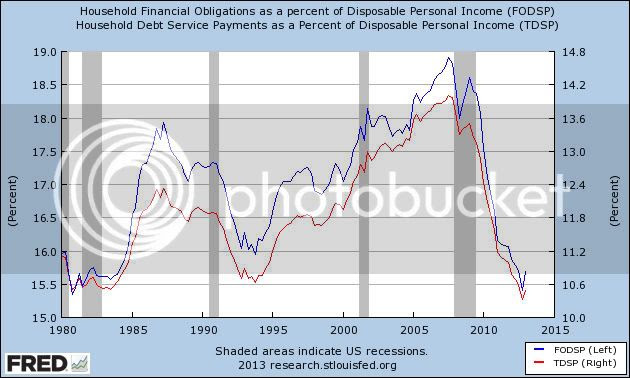 I have noted a number of times that refinancing increased in 2011 and 2012 with new record lows in mortgage rates, and probably played a major role in keeping the economy from tipping back into recession.

Now, for the first time in four years, household deleveraging has stopped. Whether we have already hit the absolute bottom or not is impossible to say, but it certainly appears that the bottoming process has begun.

It's also worth noting that the willingness of households to re-leverage, even slightly, bespeaks increasing confidence about the future. Recall that this has also shown up in recent consumer confidence readings, which have made 5 year highs, and in Gallup's consumer spending data, which has been strong ever since last December, even in the face of the payroll tax increase. This is also of a piece with the new post-recession lows in the savings rate.

I believe thie is the beginning of a very slow sea change.
Posted by New Deal democrat at 12:30:00 PM