Just Where Is That Inflation Again?

First, a big tip of the hat to Bob McTeer's Economic Policy Blog for providing the original inspiration for this post.  The following is essentially an expansion on the previously linked post.

For the last four years, there has been a continual call from conservative economists for a mammoth, Weimar Republic like spike in inflation.  While they have been wrong for that entire length of time, they continue to make the call.  The problem is there is no reason for this to happen.  Why?  Well, I'll tell you.  For those of you who believe in the inflation monster living under the bed, I'll write very slowly.

What everyone on the right is so scared of is this chart: According to Investopedia, the above chart represents:

The total amount of a currency that is either circulated in the hands of the public or in the commercial bank deposits held in the central bank's reserves. This measure of the money supply typically only includes the most liquid currencies.

What the right is assuming is that the total supply is 100% available to the public, or that it will immediately flood the US economy -- as in, tomorrow all of this  money will magically hit the economy and that total increase in supply will lower the value of the underlying asset.  They're essentially relying on an econ 101 analysis of supply: an increase in supply will lead to a proportionate decrease in value.

The problem with the above statement is that there's a tremendous amount of confusion about how the monetary base will enter the economy.  Remember that the cause of this recession was a financial crisis; banks didn't have sufficient reserves to cover the increase in defaults on loans.  Consider the following charts from the quarterly banking profile published by the FDIC:

Capital reserves held by a bank or financial institution in excess of what is required by regulators, creditors or internal controls. For commercial banks, excess reserves are measured against standard reserve requirement amounts set by central banking authorities. These required reserve ratios set the minimum liquid deposits (such as cash) that must be in reserve at a bank; more is considered excess.

The reason banks keep these are they provide an extra cushion of safety:

Financial firms that carry excess reserves have an extra measure of safety in the event of sudden loan losses or cash withdrawals by customers. This may increase the attractiveness of the company that holds excess reserves to investors, especially in times of economic uncertainty. Boosting the level of excess reserves can also improve an entity's credit rating, as measured by ratings agencies like Standard & Poor's.

If we subtract the total amount of excess reserves from the increase in the monetary base, we get this graph: 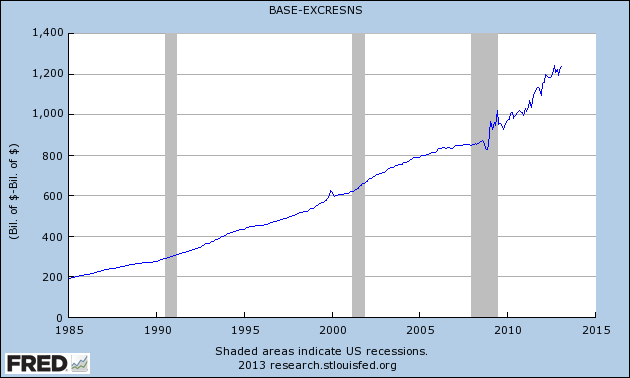 But Bonddad! The monetary base has been increasing!  We were right all along!  There is a flood of money in excess of these "excess reserves" coming into the economy and we will literally drown in dollars!!!!

First, let's look at the above data from the "percent of GDP" perspective: 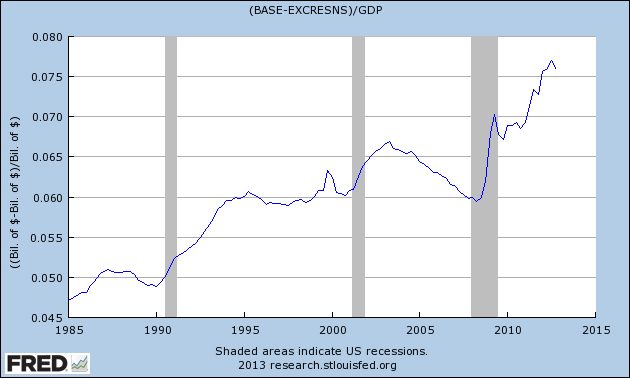 The above graph shows the amount of money that could get into the economy after subtracting out the increase in excess reserves and than takes that difference and divides total nominal GDP by that number arriving at a percentage.  We see that the average for the 1990s and early 2000s for this percentage about about 6.25% (I'm eyeballing the chart here).  We're currently at 7.5% -- 1.25% higher.

Secondly -- and as I've pointed out many times before -- this increase in occurring during a period low and declining monetary velocity (see the graphs here), which is

The rate at which money is exchanged from one transaction to another, and how much a unit of currency is used in a given period of time. Velocity of money is usually measured as a ratio of GNP to a country's total supply of money.

If you print more money, but it is being spent at a lower rate than any increase in the monetary base will have a declining impact.  Declining velocity is to be expected in a debt-deflation recovery -- a recovery where the economy is primarily liquidating debts rather than buying goods.

Third, we're not seeing this increase in the monetary base lead to an above normal increase in any measure of the actual money supply.  Consider the following charts that show the year over year increase in MZM, M1 and M2: 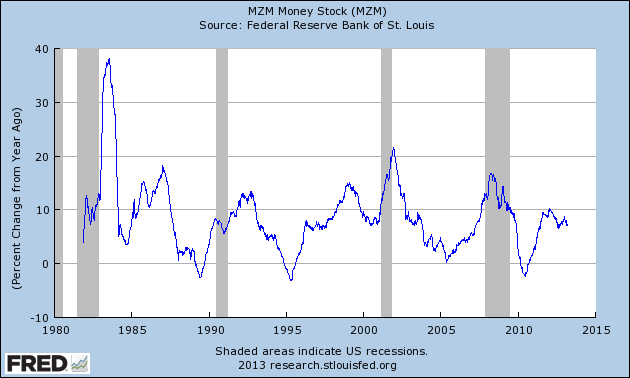 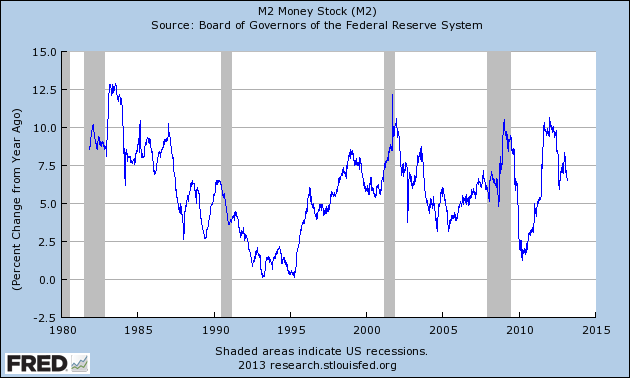 In summation, the big, scary inflation monster isn't out there.