Is the Economy Stronger Than We Think? Pt. II

Last week, I wrote a post titled, "Is the Economy Stronger Than We Think?" where I looked at the strengthening housing market, stronger industrial production, rising retail sales and strong manufacturing and non-manufacturing numbers.  My conclusion was that -- even though these numbers were only from one month -- the strength was impressive.

Last week the conference board issued it's leading and coincident numbers, which again impressed.  Consider the following:

The Conference Board LEI for the U.S. increased in February for the third consecutive month. Large positive contributions from all the financial components, building permits and average workweek in manufacturing offset the negative contributions from manufacturers’ new orders for nondefense capital goods and consumer expectations for business conditions. In the six-month period ending February 2013, the leading economic index increased 2.3 percent (about a 4.6 percent annual rate), an improvement from the contraction of 0.2 percent (about a -0.4 percent annual rate) during the previous six months. In addition, the strengths among the leading indicators have become more widespread in recent months

8 of the 10 LEI components increased last month.  And note the strength in some of the numbers: the average workweek added .13 to the index; building permits added .14, the leading credit index added .14 and the interest rate spread added .20.  The size of these increases in conjunction with the breadth of the increases is good news.

Let's turn to the coincident indicators.

The Conference Board CEI for the U.S., a measure of current economic activity, rose moderately in February, following a sharp decline in the previous month. The index increased 1.0 percent (about a 1.9 percent annual rate) between August 2012 and February 2013, faster than the growth of 0.4 percent (about a 0.8 percent annual rate) for the previous six months. However, the strengths among the coincident indicators have become somewhat less widespread, with three out of four components advancing over the past six months. The lagging economic index continued to increase almost at the same pace as the CEI, resulting in virtually no change in the coincident-to-lagging ratio. Real GDP expanded at a 0.1 percent annual rate in the fourth quarter of 2012, after increasing 3.1 percent (annual rate) in the third quarter.

The conference board's statements on the CEI are a bit puzzling.  They state, "However, the strengths among the coincident indicators have become somewhat less widespread, with three out of four components advancing over the past six months."  But there are only four individual components for the index, meaning 75% of the components are rising.  Additionally, consider the underlying CEI data.

In the last 6 months, there have been 24 individual data readings.  Of those, only 4 (those outlined above in red) were negative.  I would argue that this is a very positive data set, not weak as is implied by the press release.  And consider these additional data points that flesh out the above numbers: 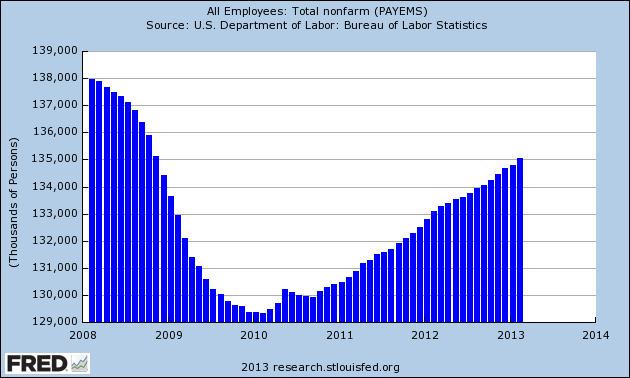 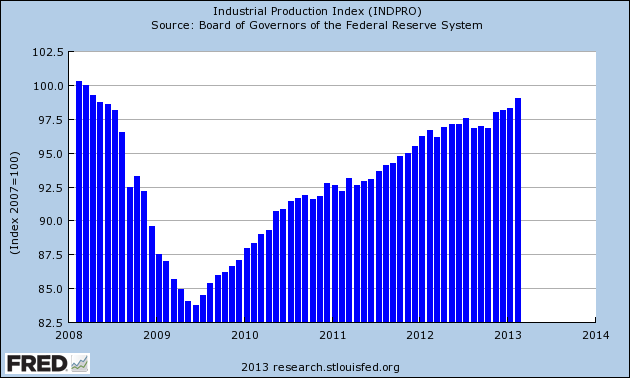 While the statistic "total manufacturing and trade sales" doesn't exist in the FRED data base, the above six data points are from the LEI report and show the total amount of this category for each of the last six months.  With the exception of the drop in October (the third data reading) this number has moved higher each month. 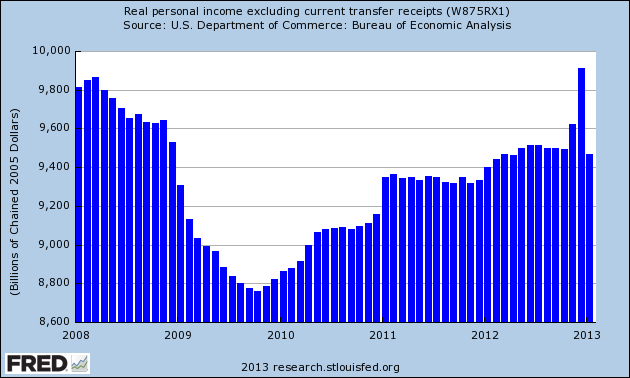 Personal income less transfer payments is the only weak data point in the series.  However, with unemployment still at 7.7%, it's foolish to expect any upward wage pressure (I'm not saying it's good that it's happening; but I am saying we know why the number is weak).

Additionally, consider this chart of the data from the report: 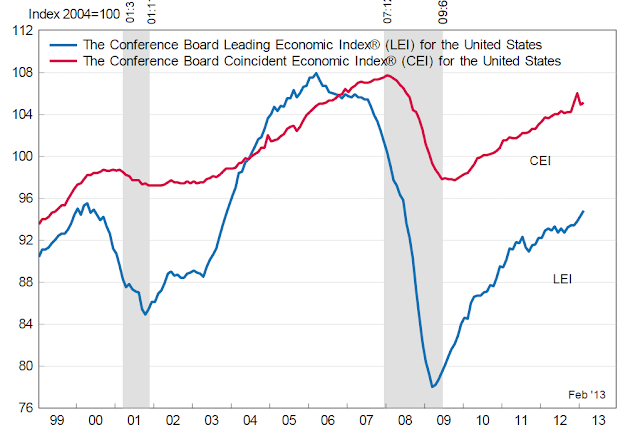 Both indicators are still firming moving higher.  While we shouldn't extrapolate this trend to infinity, we should note the underlying trend as it currently exists.


Dennis Lockhart, president of the Federal Reserve Bank of Atlanta, has identified three leading indicators of the labor market: changes in jobless claims, temporary help and the ability of small businesses to hire the employees they need. All three have improved, with applications for jobless benefits averaging 339,750 a week in the four weeks ended March 16, the lowest since February 2008.
A jump of 16,000 jobs in February brought temporary-help- services payrolls to 2.58 million, the highest since August 2007 and up from 1.75 million in June 2009, when the U.S. emerged from the 18-month recession.

The February survey of small-business optimism showed 21 percent of respondents had positions they weren’t able to fill, the most since June 2008 and an increase from 18 percent in January, the National Federation of Independent Business reported.

As the article notes, all three have shown recent improvement.

The bottom line is the above data is solid.  There is one headwind to consider, which is that we haven't seen the full impact of the sequester hit these numbers, so a dip or slowdown is possible over the next few months.  However, we're already a few months into the sequester, and we're not seeing the widespread slowdown that I and others expected.
Posted by Unknown at 9:30:00 AM