A couple of years ago I wrote that a fair target for when the Oil choke collar would start to loosen was this year, i.e., 2013. The recent evidence is that the loosening is indeed starting. I've been meaning to write a long post on this, but haven't had the time. Rather than keep putting it off indefinitely, let me dole it out in little bits.

The news is even better when we consider the prices of gas as a share of average earnings. The following graph divides the price of a gallon of gas by average hourly earnings for nonsupervisory workers to give us the "real" gas price for Joe Sixpack: 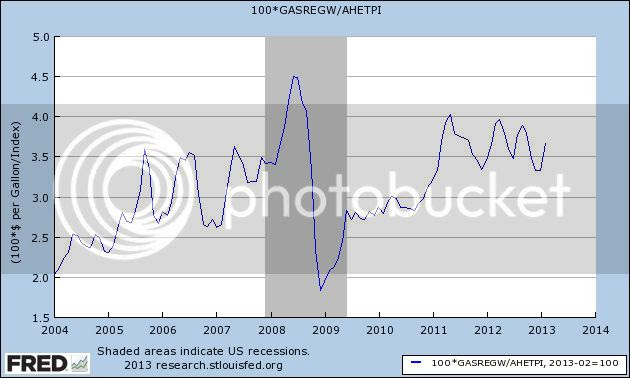 While gas prices are still higher than they were before the 2008-09 recession, each successive peak has been less, meaning that even at its last couple of peaks, it has taken less and less of a bite out of the average consumer's wallet.

Another way to look at the same data is to calculate real, inflation adjusted wages with (red line) and without (blue line) the effect of gas prices, which is what the next graph does: 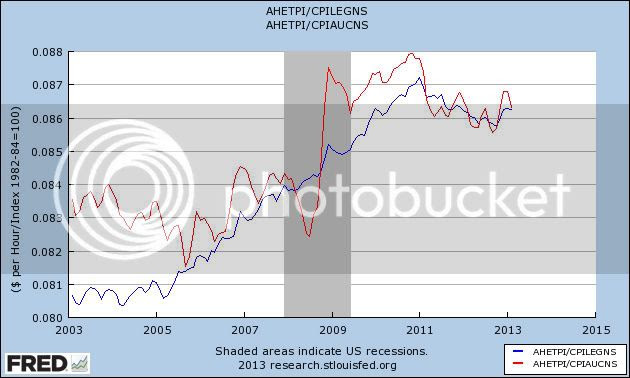 Here's the same data measured on a Year-over-year basis: 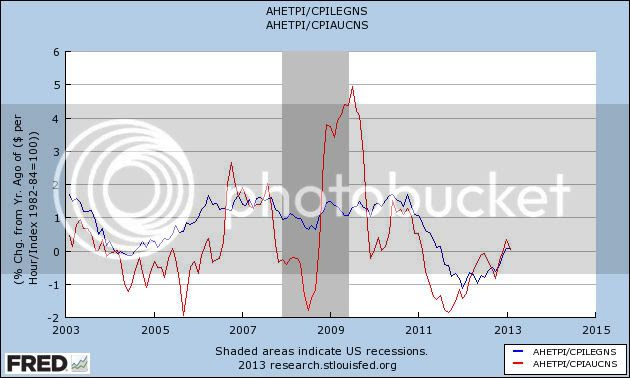 Notice that increasing gas prices have been the largest factor in plummeting YoY real wage growth. Secondly, it looks like that declining trend has bottomed, and in the last couple of months has actually turned positive YoY.

The loosening of the Oil choke collar, enabling Americans to save more, or spend more on other goods, may be the sleeper economic story of this year. There's much more to the story, and I'll follow up in further posts.
Posted by New Deal democrat at 1:00:00 PM