The Euro crisis in one graph

With a number of economists and pundits speculating that the imposition of capital controls in Cyprus marke the beginning of the end for the Euro in its current configuration, the below graph which I've copied from The Economist is especially telling: 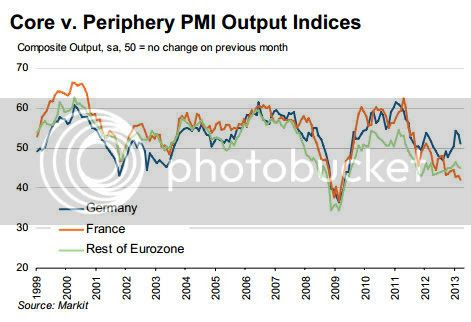 Take a look at the green line. It shows that, outside of Germany and France, the average Eurozone economy has been in almost unremitting malaise or contraction for over five years! How long do the citizens of those countries put up with austerity seen as imposed by Brussels and Berlin before they decide they have had enough?

Not much longer, I suspect.

P. S. Note I'm not calling into question the EU itself, but just the single currency.
Posted by New Deal democrat at 12:48:00 PM