In the past I identified 7 harbingers of the sudden downdraft in the economy that took place over the late spring and summer. With the renewed Euro crisis, other commentators, notably Prof. James Hamilton of Econbrowswer have picked up on the resemblences of the current situation to then (and with Calculated Risk reposting Hamilton's work, you should expect that the resemblences are at this point becoming widely known).

A few weeks ago, I updated the 7 harbingers and concluded they were not suggeting another downdraft at that point. There has been at least one important change, so let's update again.

Harbingers which have turned down:

Shanghai stock index - after a 10% crash in 2 days this market has moved sideways. In April-May it plummeted about twice as much.

Oil prices at 4% of GDP - Oil came very close to $90 again at the beginning of November but already backed off. The duration of the upward move was shorter, and unlike April, there were no intraday moves over $90. Here's a graph: 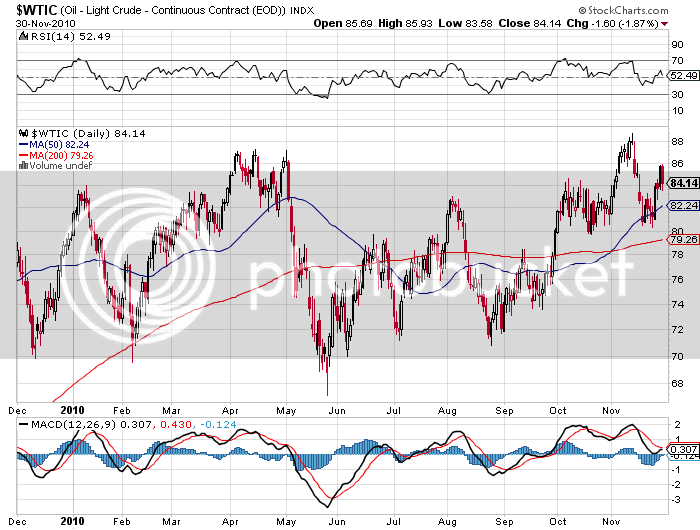 Libor index rising - this is probably the most telling harbinger of all.
Here's what I said a few weeks ago: "Not only is it still asleep, it has actually declined in the last couple of weeks. There is ZERO anticipation of banking stress evident."
This has changed. LIBOR is awakening from its slumber: 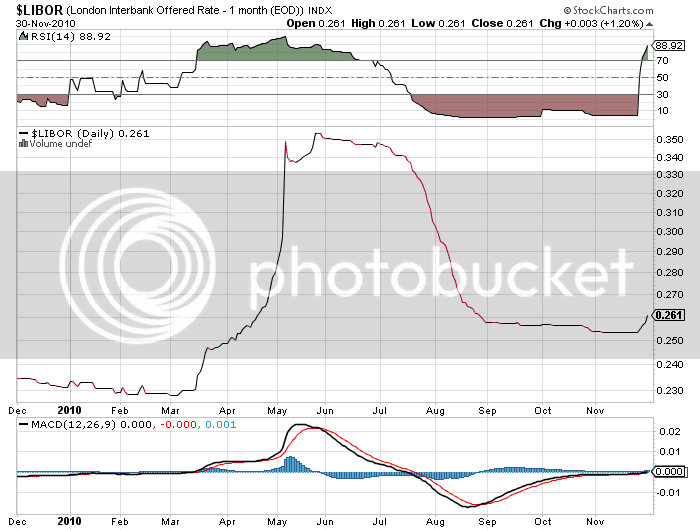 While the percentage move is small at this point, fear is again being introduced into the banking system. Since the European monetary and political leaders appear hapless at this point, unless there is a sudden introduction of shrewdness, I would expect LIBOR to continue to rise. This is the only way I see that the Euro crisis affects the US economy at this point.

Harbingers that have not confirmed a slowdown:

Bond yields correlation with stock prices - This one is a close call. For the last two months, these have both moved up, but on a daily basis these continue to move as mirror images and not in tandem, indicating no fear of a deflationary pulse: 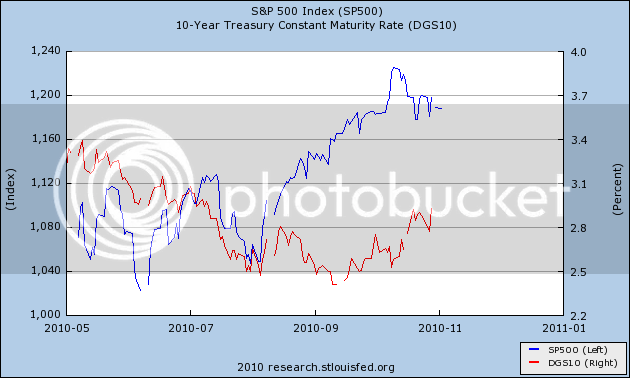 Real M1 and M2 money supply stagnant or shrinking - to the contrary, both continued to grow in November

One more thing: The more I have thought about it since summer, the more I believe the BP oil catastrophe in the Gulf of Mexico had an outsized effect on US consumer and employer psychology. Day after day, live video from the bottom of the Gulf showed an ongoing cataclysm, with US authorities looking helpless and ineffectual. G*d willing, we will not see any similar disastrous event unfold now.

In Conclusion, three of our harbingers show increased risk. Of these, the Shanghai index shows only half of the decline as in spring, and Oil did not go as high, or stay there as long, as in April.

The other 4 harbingers do not show increased stress, in fact they are positive for the economy. Also, there is no focusing disaster to trigger the response of Pavlovian fear of another September 2008 style meltdown that I believe was instrumental in the summer slowdown.

My view at this point: it's Mini-May.