Yesterday prices gapped lower at the open (a), but then started to move higher but very slowly. Notice the MACD at (c); there is very little movement, indicating the trend is very timid. Along the way we had several consolidation areas (b). At (d) there is a double top with declining momentum (e), indicating a possible change of direction, which occurred at (f). Prices rallied into the close (g), but then sold-off (h) on high volume.

First, notice that prices yesterday ran into resistance from a price level established a few days ago.

Treasury prices gapped higher at the open (a), but hit resistance at the above mentioned price point (b). Also note that momentum started to drop (c) around this time, indicating a possible change in direction was coming. After being unable to break through resistance, prices formed a downward sloping channel, bound by lines (d) and (e).

The dollar continues to move higher (e) with several gaps indicating a supply/demand imbalance. However, yesterday prices broke through the trend line (f), albeit barely. This leads to the question -- how much of a trend line break is necessary for the break to matter? Martin Pring uses the 3% rule -- a 3% break is required for the break to be valid. I'm not so rigid in my analysis. The answer is it depends. Considering the strength of the uptrend, I don't think yesterday's break was important. However, today's action will be the primary determinant. 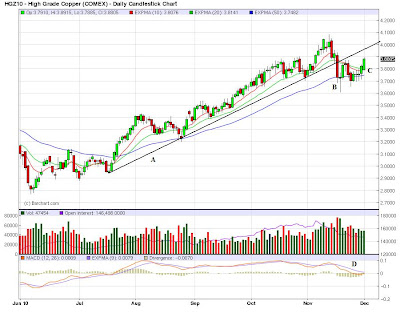 Copper has broken is primary uptrend (A). However, prices found support at the 50 day EMA (B). Notice the EMA picture shows the 10 and 20 day EMA moved lower, but not in a big way; in addition, the shorter EMAs are above the 50 day EMA. The MACD is still positive and is about to give a buy signal. However, lurking over the technical picture is China, which has printed increasing inflation numbers, indicating they will probably be tightening their lending policies soon.
Posted by Unknown at 6:41:00 AM