Manufacturing activity was one of the primary drivers of the latest expansion. It was one of the first economic areas to show a rebound. However, over the past few months it has since slowed a bit, although it is hardly crashing. I believe the best description of the growth in this sector is "moderating." 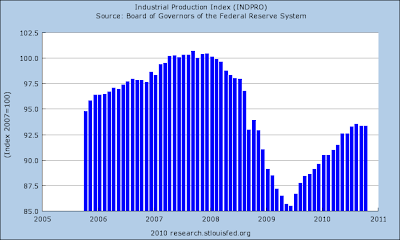 Overall industrial production has bounced back from its post recession lows. While the last four months have shown slower growth, note that periods similar to this were evidence in the previous expansion and are also evident from a longer view of the data (which goes back to 1910). 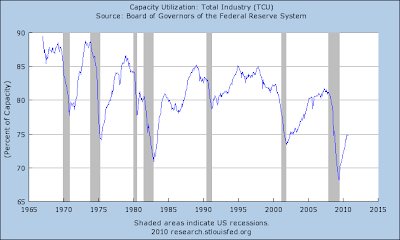 Capacity utilization cratered during the recession, printing its lowest level in almost 40 years. However, it too is bouncing back. 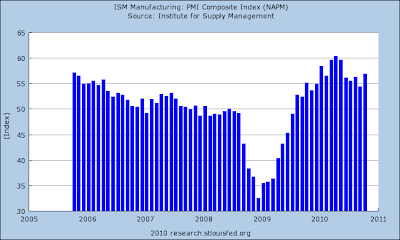 The ISM national manufacturing numbers have been consistently printing about 50 for over a year, indicating the manufacturing sector is doing well. 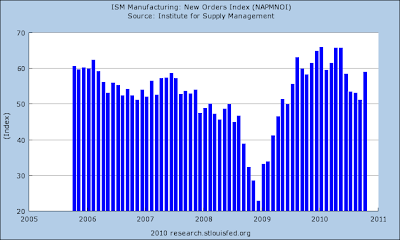 The ISM new orders index was approaching 50 -- the line that delineates between expansion and contraction -- but bounced back strongly in the latest report: 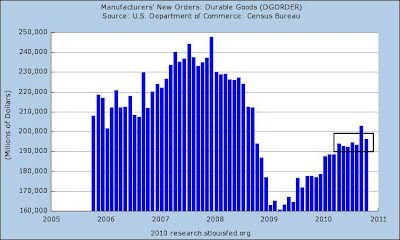 However, this number is extremely volatile. As the chart below shows, long periods of near stagnation and volatility occur during expansions. 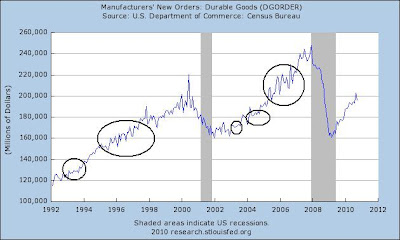 Texas factory activity increased in October, according to business executives responding to the Texas Manufacturing Outlook Survey. The production index, a key measure of state manufacturing conditions, was positive for the second consecutive month and slightly higher than its September reading.

Despite the rise in output, several other manufacturing activity indicators fell again. The new orders and shipments indexes were negative for the fifth consecutive month. The capacity utilization index dipped below zero, with more than one-quarter of respondents reporting a decrease.

Measures of general business conditions improved markedly in October, suggesting the broader economy strengthened. After four months in negative territory, the general business activity index rose sharply from –18 in September to 3 this month. The company outlook index also jumped up, rising from –4 to 13. The advance in the index was largely due to a sharp decline in the share of manufacturers reporting a worsened outlook, falling from 25 percent to 13 percent.

The above numbers show a sector that is slowing as demonstrated by the moderating pace of industrial production growth over the last new months. In addition, capacity utilization is still low and several regional federal reserve manufacturing numbers (New York, Richmond and Texas) show clear signs of slowing. While the durable goods numbers have been near stagnant for the last 4-6 months, this is typical of this particular data series. On the positive side, the ISM number's latest number showed a strong pick-up in the latest report, the overall number has been positive for over a year and the Philly and Kansas City Fed showed strong improvement. In addition, the Chicago Fed manufacturing index is still printing a positive number, although at a moderating pace.