In terms of the normal progression of leading/coincident/lagging data, the Great Recession and the recovery thereafter have almost completely given the lie to the proposition that "it's different this time." But one thing that has been different about this recovery, and has had a very important effect on the generation of jobs, was the abysmal failure of the Congress to extend further aid to the states. Faced with nearly a 20% decline in revenues since the peak of the economy, the "50 little Hoovers" that Paul Krugman has mentioned so often had little choice but to cut into sinew and bone to come up with balanced budgets. To visualize the difference this has made in the jobs recovery, here is a graph of job growth since the bottom last December, in private industry (blue) vs. government (green) and the composite nonfarm payrolls (red). 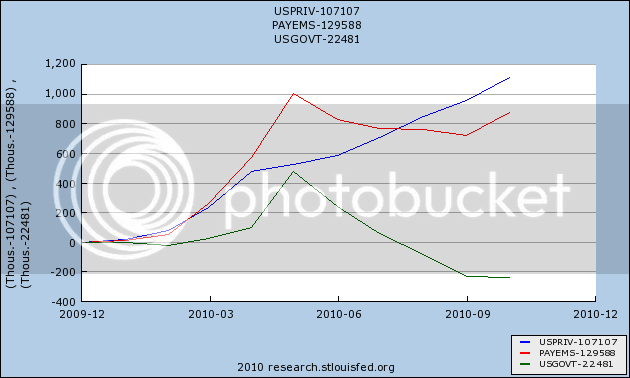 While the census added and then subtracted 500,000 jobs between February and September, its net affect was zero. Thus the loss of 250,000 government jobs this year is real, and its effect on overall job growth is obvious.

One important question is, whether there is further bloodletting in store for the states, or have their budget woes hit bottom? The Rockefeller Institute reported several months back that overall state tax revenues probably bottomed out at the end of the first quarter or beginning of the second quarter this calendar year. But a crucial test - the holiday season - is upon us. The Tax Foundation reports, citing the Rockefeller Institute, that

November and December are the crucial months for state sales tax collections, which make up a third of state revenues.

Although the Rockefeller Institute has yet to report on third quarter state tax revenues (not just sales tax, but personal and corporate income taxes, and other miscellaneous taxes), the following report by Stateline (a nonprofit, nonpartisan online news site funded by the Pew Foundation that reports on state issues) suggests that the improvement in state tax revenues won't be able to make up for continuing shortfalls even next summer:

In recent days, officials in 27 states have said that year-over-year monthly revenues are increasing and some are forecasting a rise in tax receipts in state budgets for the fiscal year that begins July 1.... Improved sales tax receipts are leading the revenue recovery in most states.... Corporate tax revenue also is up in many states, consistent with the rise in business profits nationally. ...

Still, there is a flip side to [states'] recovering revenue picture that puts the situation in all states in perspective. [States] may appear to have ... extra cash next year, but most of that will be needed to make up for the loss of federal stimulus money and mounting Medicaid and public pension costs....

Most states do not have surplus revenues, which means they will have to cut spending, raise taxes, borrow or tap reserves to balance their budgets for the fiscal year that begins July 1. NCSL is projecting that states will have a total of $72 billion in budget gaps in 2012.... Many states with revenue increases still are confronting huge budget shortfalls that guarantee years of fiscal turmoil. [For example,] California may have escalating sales tax receipts, but its budget shortfall will exceed $25 billion for the fiscal year starting July 1....

In other words, if Stateline's report is correct, it appears that the combination of the total expiration of federal government assistance (a given at this point), mounting costs, and the ending of one-off tax gimmicks mean that the states (and in particular California) are likely to need to make further cuts next summer, a very depressing prospect, even if the level of those cuts are nowhere near what has been necessary in the last year.

UPDATE: As if they were reading my mind, the Rockefeller Institute released their preliminary report for the third calendar quarter of 2010 today. From their news release:

Tax collections increased by 3.9 percent in the third quarter of 2010, compared to the same period a year earlier, based on data from 48 states. Of states reporting, 42 showed gains in overall tax revenues. Collections improved for the two largest revenue sources — personal income and sales taxes — while corporate income tax revenues declined slightly.

The growth in overall collections is partly driven by new tax laws in several states, but is also due to a slowly recovering economy, according to report authors Lucy Dadayan and Donald Boyd. Yet they cautioned that difficult times for states’ fiscal conditions have not ended.

“The state tax revenue picture in the first three quarters of calendar year 2010 represented significant improvement from the collapse of the preceding quarters,” they write. “Still, the immediate outlook is for revenue collections significantly below prerecession levels, and growing spending pressures. The overall picture remains: States will face continued, significant budget challenges in fiscal 2011 and beyond.”

The full report notes that total state tax revenues were 7.0% below the third quarter of 2008 - which was the last quarter of YoY growth. Since the Rockefeller Institute only gives YoY figures and does not attempt seasonal adjustments, it is impossible to know absolute, seasonally adjusted or even annual numbers, but my best back of the envelope estimate is that with this quarter, state sales taxes have made up about half of their percentage shortfall from peak.
Posted by New Deal democrat at 11:30:00 AM