More Thoughts on the Employment Report 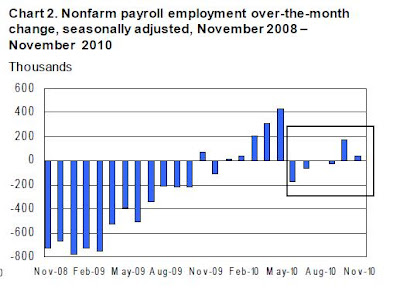 The last six months have been extremely disappointing from an employment perspective. While we saw nice increases before that time, since then total establishment job growth has been fluctuating right around 0. Last month we printed over 150,000, and this month we saw a mere 39,000 -- a clear deceleration.

The question is why the slowdown?

Here are some thoughts, in no particular order of importance.

1.) We've only recently seen a pick-up in economic activity and numbers. The previous Beige Book indicated the economy was weakening. In other words, there hasn't been enough improvement, especially in light of the slowdown we saw over the summer as a result of the EU situation.

2.) Companies are printing strong profit numbers without new hiring; from their perspective, there is no need for new employees.

3.) There isn't enough domestic growth (US based growth) to warrant the new hiring

4.) The legal uncertainty argument: the changes we've seen in the laws are extremely complicated and one (health care) has a direct bearing on hiring decisions. Until companies have sorted out the ramifications of these changes (and as soon as regulations are actually written) then we'll see an increase.

5.) There is still uncertainty about the future; that is, there is still enough concern about future growth prospects to put a freeze on big hiring plans.

6.) We're still seeing enough problems from Europe to raise enough concern about the future.
Posted by Unknown at 10:23:00 AM