A few months ago it was fashionable, pace Zero Hedge, to note the discontinued M3 money supply series, which was "crashing" in YoY terms. We were told that this big a collapse hadn't been seen since the 1930s. (Of course, we might counter with the fact that it's a good thing that less credit has been created compared with the fog-the-mirror loans of the recent past, but why get in the way of a good story?).

A current proxy for M3, we were told, and I agree, is MZM (total money supply from all sources). Now, one slight problem is that M3 (and MZM as well) tend to peak towards the end of or even after recessions, and bottom well into the ensuing expansion: 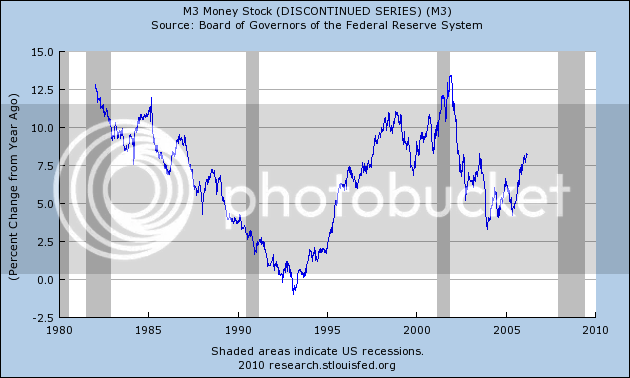 In fact, the Fed discontinued M3 because it did not believe it carried much utility, as real M1 and real M2 have a much better record forecasting economic activity in the near future, and M3's essential components are captured by MZM above. In fact, there has never been a recession, including the Great Depression, where real M1 wasn't negative YoY, and real M2 wasn't less than +2.5% YoY. That's why, as you know, I track both real M1 and real M2 weekly. Here's a graph of those two series going back 50 years (in the below graph, I subtract 2.5% from M2 so that the "danger line" for both is zero): 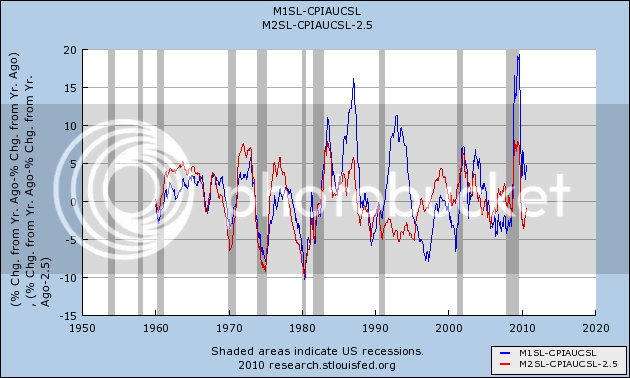 So what is happening now? Sure enough, M3 looks like it may have bottomed on a YoY percentage basis:

And MZM? It is now positive again YoY: 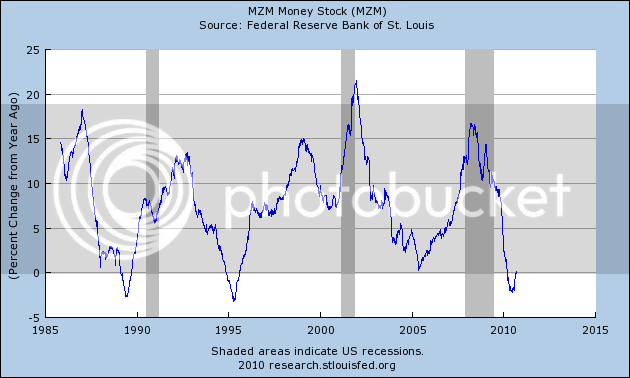 I'm sure Zero Hedge has highlighted this fact, right?

P.S. This is a good example of what Barry Ritholtz called "intellectual jihadism" last week.
Posted by New Deal democrat at 8:30:00 AM