A Closer Look at Wheat

Sometime over the last few years I read a series of market analysis books that dealt with inter-market analysis and cyclical analysis. These books look at markets from a relationship perspective. For example, because most commodities are priced in dollars, the dollar and commodities usually have an inverse relationship: when the dollar rises commodities priced in dollars fall. Another example is the recent inter-relationship between the stock and bond markets; as the bond market has rallied it has taken money from the stock market.

Inter-market analysis stresses the importance of four markets: equities, capital markets (the bond markets) futures (commodities) and currencies. This week, I'm going to take an in-depth look at some of the commodity markets, providing some basic information on the big commodities.

The United States is a major wheat-producing country, with output typically exceeded only by China, the European Union, and India. During the 2000s, wheat ranked third among U.S. field crops in both planted acreage and gross farm receipts, behind corn and soybeans.

The five major classes of U.S. wheat are hard red winter, hard red spring, soft red winter, white, and durum. Each class has a somewhat different end use and production tends to be region-specific.

Wheat area has dropped from its early 1980s highs, due mostly to declining returns relative to other crops and alternative options under government programs. Authorization of the Conservation Reserve Program (CRP) in the 1985 Farm Act, followed by planting flexibility provisions in the 1990 Farm Act, provided wheat farmers with other options for use of their acreage. Under the 1990 Act, farmers participating in commodity programs could plant up to 25 percent of their base wheat acreage to crops other than wheat without losing base acreage. Farmers thus had an incentive to grow crops promising higher returns or to earn rental payments from idling land under the CRP.

Let's take a look at some charts regrading wheat exporters and importers: 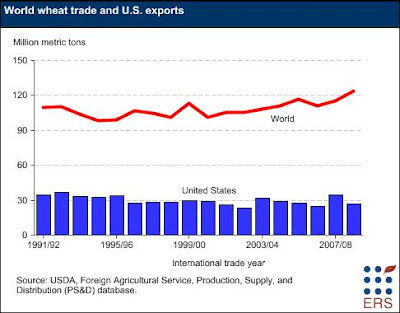 The US' percentage of world exports has been pretty consistent over the last 20 years. 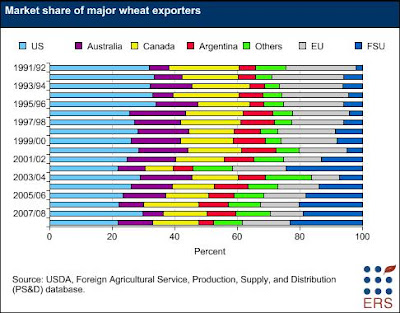 The US has consistently been one of the largest wheat exporters. 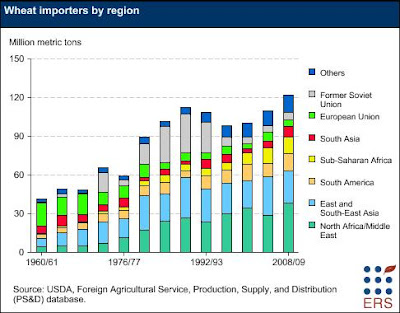 Total wheat imports have been increasing for the last 30 years, led by 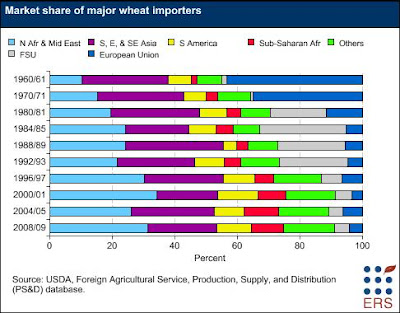 Increased demand from North Africa and the Middle East

Let's take a look at wheat prices from several perspectives, starting with the long-term and moving to the short-term. 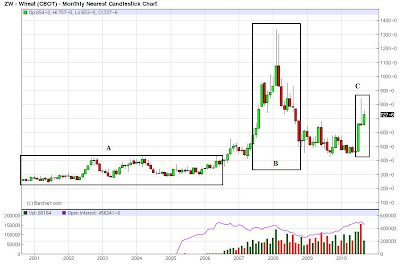 For the first part of the decade, wheat prices were confined to a fairly narrow trading range (A). However, prices spiked in a big way in 2008, but have fallen a bit from those levels (B). Currently, prices are rising again, largely on news from Russia. 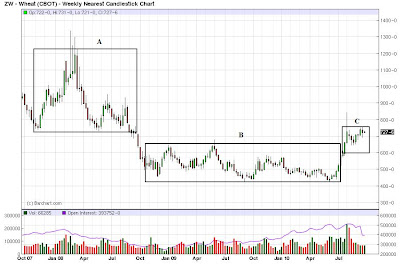 Section (A) highlights the 2008 price spike clearly. Prices have consolidated by forming a strong basing pattern (B) for about a year and a half. 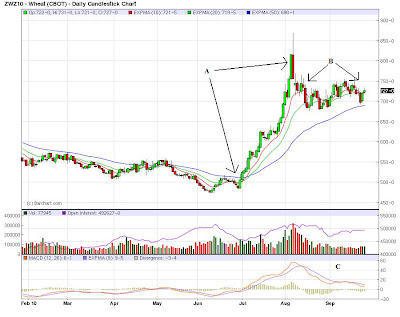 The daily chart shows the Russian price spike (A) and the recent consolidation from high levels (B). Notice that despite decreased momentum (C), prices are moving sideways and are above the 50 day EMA. This tells us that traders aren't selling their positions outright, but are taking some profits off the table and are waiting to see what happens.
Posted by Unknown at 11:30:00 AM