Yesterday, Mish posted a story titled "Why the Statistical Recovery Feels Bad." Unfortunately, his analysis falls far below his abilities.

He begins with this statement:

Inquiring minds might be interested in charts of GDP minus the effect of increased government spending. The charts are from reader Tim Wallace who writes ...

And then proffers this chart: 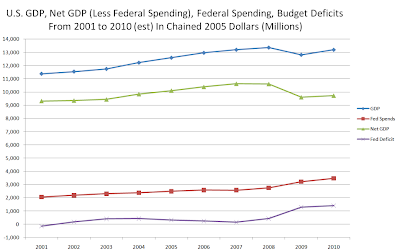 There is nothing wrong with his calculations; the reader simply went to the BEA, downloaded a spreadsheet of GDP and subtracted government payments from total GDP.

Note that the chained GDP number less the federal spending nets out to a number less than the GDP of 2004. So basically, our economy is back where it was seven years ago.

This statement is wrong on several levels. First, any person who has been through econ 101 knows the GDP equation: Personal Consumption Expenditures + Investment + Net Exports + Government Spending = GDP. In other words, government spending is part of the GDP equation. I seriously doubt that Mish does not know this.

But more importantly, consider this chart, readily available from the CBO: 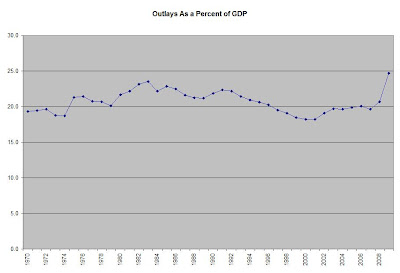 It shows federal expenditures as a percent of GDP. Notice they have fluctuated between about 18% and 25% for the last 30 years. In other words, if we did the same equation as Mish performed, we would determine that there's been no "real" growth for most of the last 30 years. Inquiring minds would have sought data for far longer periods than 10 years to see if a relationship exists -- especially when that information is readily available.

In addition, absent from his analysis is anything related to low job creation, weak wage growth, growing income inequality, a housing market with declining prices etc... There are plenty of reasons for low consumer confidence right now which more completely explain why this is a "feels bad" recovery.

But here's the biggest loss: Mish is better than this. He is capable of stunningly insightful and in-depth economic analysis. However, he is clearly more concerned with starting with a political conclusion (all government spending is bad) and finding superficial equations to prove his point. This is appropriate for think tanks of both political orientations (think Cato and EPI), but certainly not for a writer with Mish's abilities. We can only hope that Mish the thinker soon returns and says goodbye to Mish the politician.