A Closer Look At Copper

I'm going to continue my look at basic commodities with copper because it's a very important commodity:

Copper is usually found in nature in association with sulfur. Pure copper metal is generally produced from a multistage process, beginning with the mining and concentrating of low-grade ores containing copper sulfide minerals, and followed by smelting and electrolytic refining to produce a pure copper cathode. An increasing share of copper is produced from acid leaching of oxidized ores. Copper is one of the oldest metals ever used and has been one of the important materials in the development of civilization. Because of its properties, singularly or in combination, of high ductility, malleability, and thermal and electrical conductivity, and its resistance to corrosion, copper has become a major industrial metal, ranking third after iron and aluminum in terms of quantities consumed. Electrical uses of copper, including power transmission and generation, building wiring, telecommunication, and electrical and electronic products, account for about three quarters of total copper use. Building construction is the single largest market, followed by electronics and electronic products, transportation, industrial machinery, and consumer and general products. Copper byproducts from manufacturing and obsolete copper products are readily recycled and contribute significantly to copper supply.

Copper is often called the commodity with a Ph. D in economics because as economic activity increases more copper is needed which increases copper's price. The reverse is also true. Let's take a look at some of the basics: 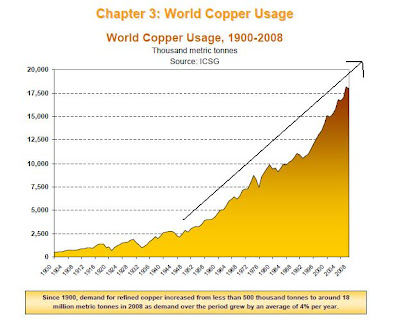 Copper usage has been increasing for the last 30 years. Asia (China and Japan) are the primary reasons for the increase in demand. 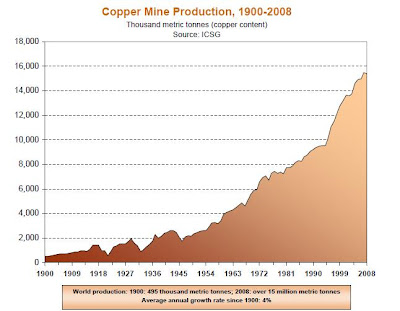 Mine production has been increasing at a steady rate for the last half century. 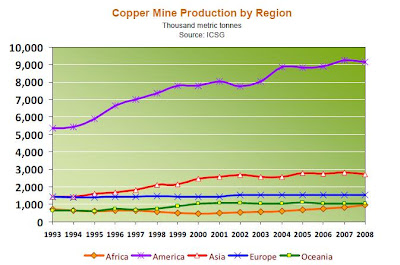 The Americas (think Chile) are the largest copper producers. 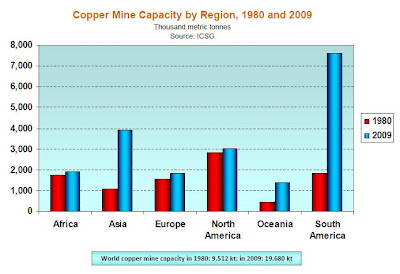 Notice that South America (again, think Chile) have been increasing their capacity for the last 30 years. 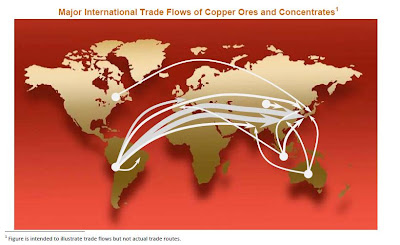 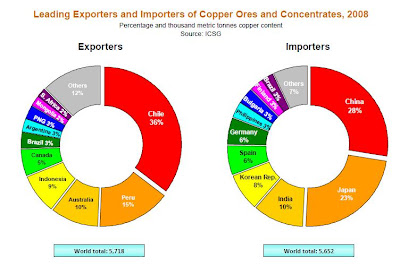 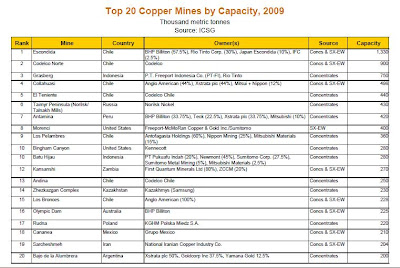 Notice that six of the largest 10 mines are in South America.

Let's take a look at the charts: 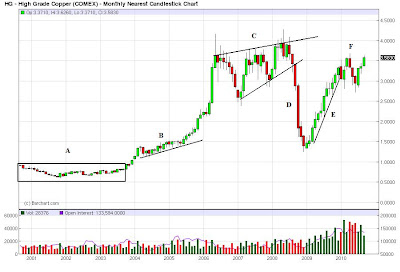 In the early part of the decade prices were in a lower range (A). They started to rally in 2004-1006 (B) and then hit big at the end of the last expansion (C), forming an upward sloping wedge. Prices then fell as the recession hit (D) but have since rallied back to near pre-recession levels (E). 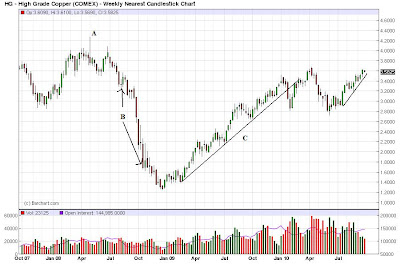 The weekly chart gives us more detail of the pre-recession peak (A), the sell-off (B) and subsequent rally (C). 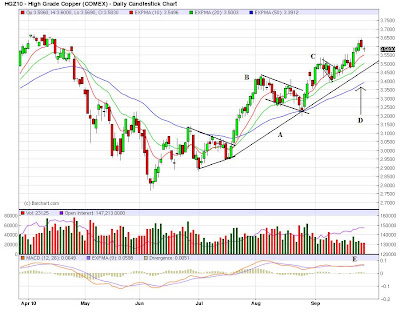 Notice the current rally (B) has been punctuated by several downward sloping pennant patterns (B and C) which helped to consolidate gains. Also note the EMA situation is very bullish with the shorter above the the longer and all moving higher. Note the MACD is giving more of a neutral reading.
Posted by Unknown at 11:30:00 AM