A Chicago-area economic report issued Thursday showed unexpected strength in September, giving further ammunition to the camp optimistic about prospects for the U.S. economy a day ahead of a national manufacturing report.

The group’s measures of orders and production rose above their six-month averages, indicating corporate investment in new equipment will remain a source of strength for the economy.

“After a soft patch, manufacturing is in a process of mustering some activity,” said Ward McCarthy, chief financial economist at Jefferies & Co. in New York. “It seems to be moving in the right direction again and that will help the economy continue to grow.” McCarthy forecast the Chicago index would rise to 58.

Automakers including Dearborn, Michigan-based Ford Motor Co. are among manufacturers seeing sales picking up while holding below pre-recession levels.

“The auto business is pretty steady and coming back up a little bit,” Ford Chief Executive Officer Alan Mulally told reporters in Ann Arbor, Michigan, on Sept. 17. The economy “is coming back slower than past recessions.”

The index made a nice jump compared to its previous reading. However, note that an expansion occurs on a reading above 50 where the index has been for some time. 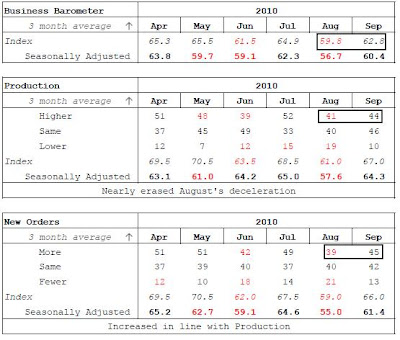 The above graphic shows the jumps in both production and new orders. 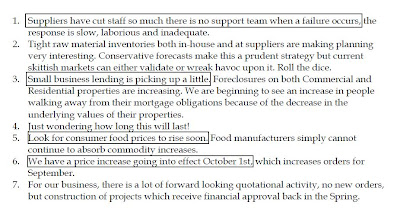 The anecdotal information was very interesting; mixing some very good statements (staff is so thin that a problem could develop due to too few employees) to concerning statements (increases in mortgage walkaways). Also note two statements about price increases indicating that the increase in commodities is starting to pass through to consumers.
Posted by Unknown at 8:30:00 AM