The SPYs have moved through important areas of resistance (a).

The QQQQs are above important areas of resistance (a).

The DIAs are above resistance (a).

The IWMs are just below important areas of resistance (a).

The IWCs have moved through important resistance.

The IYTs are just below important areas of resistance.

Anyone notice a pattern to the above observations? Equities are advancing; and it's not just one average. All are either through resistance or just below. This is a very bullish development as it indicates that across a wide range of investors classes (conservative, large cap buyers, technology and small cap investors), we're seeing interest in equities.

In addition, consider these charts of the long-end of the Treasury Market:

The IEFs broke through support, rallied to support and then moved lower again. In addition,

The long-end of the Treasury market is right below technical support.

In other words, prices in the Treasury market -- which has pulled support from the equity markets -- are moving lower at the same time we're seeing money move into equities.

The dollar has been dropping for about a month. After hitting point (b), it has formed upward sloping consolidation patterns (c, d, and e). Last week it tumbled after the Fed announced it wouldn't be rising rates anytime soon. With a falling dollar, remember that commodities will have an upward bias. 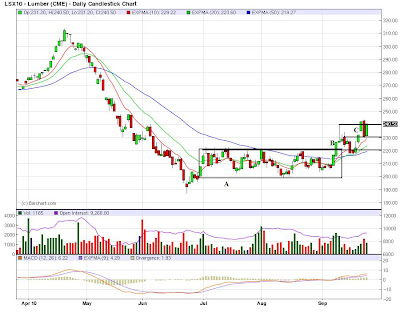 Above is a chart of lumber, which was in a strong basing pattern (A) for a few months. Now prices have started to move higher, with the initial break occurring at (B) and a continuing at (C). Lumber is obviously a key component of the housing market, so we could be seeing come initial buying in anticipation of a housing rebound.
Posted by Unknown at 5:00:00 AM