Let's turn now to the services part of the Beige Book Report:

Activity was largely stable or up slightly for professional and other nonfinancial services. Providers of information technology (IT) services such as computer software saw substantial revenue and sales gains in the Boston and Kansas City Districts, with increased demand for IT labor reported in Chicago as well. Demand for professional services such as accounting held largely steady, with Minneapolis and Dallas noting increases for selected types of consulting and legal services. Conditions were mixed for providers of real estate services, as heightened appraisal activity for refinancing purposes was offset by depressed home sales and consequent limited needs for agents and brokers. Demand for temporary staffing services remained on an upward trend, with increases noted by Boston, Philadelphia, Richmond, and Minneapolis, although Chicago pointed to a slight softening during the reporting period. Reports from the health-care sector were mixed: Boston, Cleveland, and Chicago reported ongoing increases in demand for health-care workers, while Philadelphia indicated a flattening in demand for health-care services and San Francisco noted a decline in the frequency of elective procedures and routine tests. Demand for shipping and transportation services generally expanded, although according to Cleveland the pace of growth slowed and contacts there expect little change from existing volumes in the near term.

Across a variety of industries, demand for services appears to be good. Here are the snippets from the various Fed Districts:

Boston: Software and information technology contacts in the First District report that business conditions continued to improve. Year-over-year revenue increases ranged from mid-single digits to 15 percent in the most recent quarter. Half of contacted firms increased their headcounts and another was "on the cusp of hiring."

The majority of First District staffing contacts report that business continues to strengthen, although a few experienced stagnant or inconsistent activity over the past three months. Most contacts describe business since the end of Q2 as "fair to good" or "generally positive," with revenue growth in the single digits. Year-over-year revenue changes vary widely, from down slightly to up by over 40 percent. Labor demand increased, particularly in the light industrial, information technology, and health care sectors; however, the consensus among contacts is that jobs are hard to fill. A few contacts report that the supply of job seekers is plentiful but that clients are reluctant to hire; others said that recruiting workers with specific skills has become more difficult. Bill rates and pay rates are steady or up slightly, as many clients show increased willingness to pay higher rates for quality workers. The number of conversions from temporary to permanent staff increased and permanent placements picked up.

A major NYC employment agency, specializing in office jobs, reports that, while the job market is difficult to gauge during the slow summer season, market conditions appear to be improving gradually and conditions are not as dire as last summer. The pool of available candidates is not as large as it was last summer; however, some people who had given up looking are starting to come back.

Philly: Service-sector firms generally reported minimal gains or flat rates of activity since the previous Beige Book. A large business services firm reported that client companies were not contracting for as much business as they had indicated earlier in the year. Several health-care organizations noted recent flattening in activity that is interrupting a long growth trend. In contrast, some temporary employment agencies noted that demand had picked up recently. Looking ahead, most of the services firms contacted for this report expect growth to be slow for the rest of the year. Some have reduced their forecasts; as one contact said, "It looks like we were a little too optimistic earlier this year."

Minneapolis: Activity in the professional business services sector increased since the last report. Contacts from the legal sector reported that billings during July were up from a year ago, especially for firms that deal with bankruptcies. A call center is expanding in South Dakota. Appraisers and other professional services firms that support home refinancing reported strong activity over the past month.

Dallas: Most staffing firms report that demand continues to grow at a solid pace, and is particularly strong for light industrial, sales, administrative, professional and technical workers. Placement activity continues to be mostly for contract work as employers are still hesitant to hire permanent staff. Near-term outlooks are optimistic, but respondents are cautious about the longer term. Accounting firms note that while demand for tax-related services has slowed seasonally and that for real estate and construction-related work remains nonexistent, there has been a pickup in transactional and consulting activity. Demand for legal services was largely unchanged during the reporting period, with the exception of an uptick in corporate demand for mergers and acquisitions-related activity.

Demand for transportation services remains positive.Railroad respondents noted a broad-based increase in cargo volumes, with shipments of grain products recording the largest increase. Shipping firms said small parcel cargo volumes rose, while large freight shipments declined during the reporting period. Intermodal transportation firms reported a modest increase in shipments. Airline traffic was flat to slightly down since the last report, but is stronger than a year ago. The outlook is for continued stability in air travel demand.

Let's take a look at some of the data: 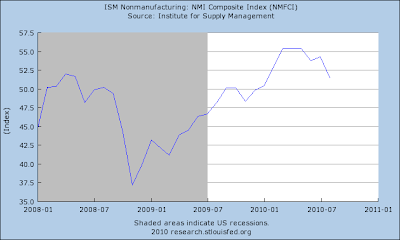 While still positive, the ISM services index has been heading lower for a few months. 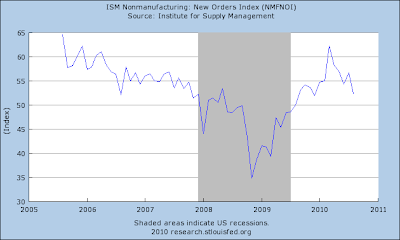 The new orders index has been moving lower as well. 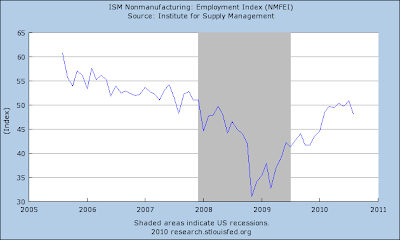 The employment section of the ISM report has been floating around 50 for awhile, but has not made any strong gains above the level. 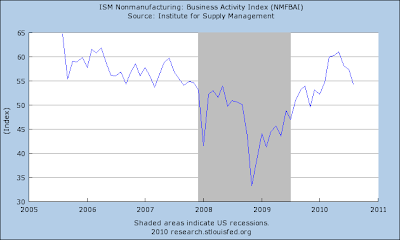 And the business activity, while still positive, is moving lower.

The above charts show a sector that is still expanding, albeit a bit more slowly.

Notice, again, the trend is for slower growth, not contraction.

And finally, consider this report from the Census Bureau regarding the services industry: