Let's take a look at the underlying data: 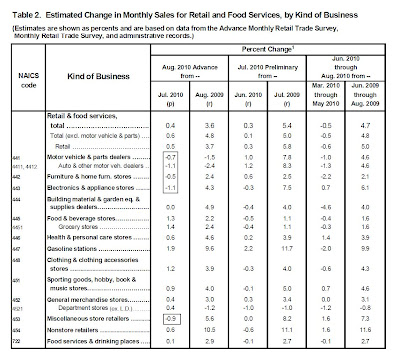 I've blocked out the areas that decreased, which fall in three primary categories: autos, furniture and electronic stores. In other words -- anything related to big durable goods purchases. 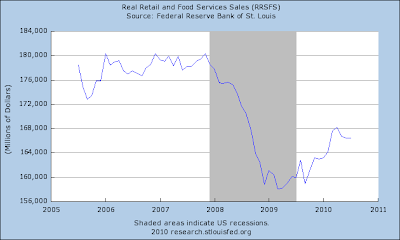 On a real (inflation-adjusted) basis, sales were stagnant.

The U.S. Census Bureau announced today that the combined value of distributive trade sales and manufacturers' shipments for July, adjusted for seasonal and trading-day differences but not for price changes, was estimated at $1,090.0 billion, up 0.7 percent (±0.2%) from June 2010, and up 9.2 percent (±0.5%) from July 2009.

A big inventory build may be underway in what is a new and uncertain factor for the economy. Business inventories, up 1.0 percent in July, rose significantly for a second month and outpaced sales for a second month. The build is broad: up 1.3 percent at wholesalers, up 1.0 percent at manufacturers, up 0.7 percent at retailers. The build for retailers is skewed by a second straight giant build at auto dealers. Full lots at dealers are probably going to become a big problem given the weakness in auto sales in today's retail sales report for August.

Bloated inventories are not yet a problem for the economy but could become a problem if economic growth fizzles out. Outside of car dealers, today's retail sales report was mostly upbeat for August meaning that excess inventory isn't a risk right now for that sector. Note however that early indications on September retail sales, including in today's Redbook report, point to no better than flat sales for September. Inventories do appear to be heavy in the wholesale sector where sales are flat. Data in the ISM report for August hint at the risk of unwanted build in the manufacturing sector.