Australia Wheat Crop To Be Large

Australia is set for a bumper wheat harvest that could propel the nation’s exports to their second highest level on record, according to the Australian Bureau of Agricultural and Resource Economics (Abare).

The official forecasting body lifted its estimates for this year’s harvest yield to 25.1m tonnes, 14 per cent higher than it projected in June and 16 per cent ahead of last season. It added that exports could reach nearly 18.4m tonnes, second only to 1996-97’s 19.2m tonnes.

As a result, exports are going to be large:

The export forecast was 3.9m higher than Abare's last estimate, in June. While the bureau failed to detail the reasoning behind its upgrade, the revision comes amid increasing evidence of alternative exporters benefiting from Russia's decision to ban grain exports following its worst drought on record.

Both the European and the US last week reported their best weekly export data for three years. A separate Abare report on Tuesday showed Australian shipments rising by one half, year on year, to 1.6m tonnes in July.

"The largest markets for bulk wheat exports in July were Indonesia, Sudan and Yemen," the report said. 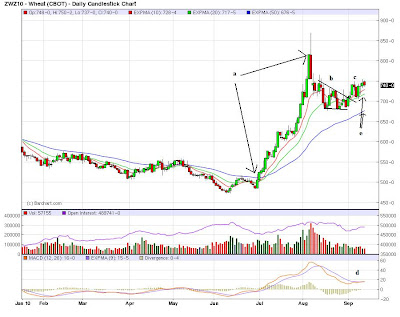 As news of the Russian situatuon hit the markets, we saw a big rally (a). Prices consolidated from that rally (b) and have moved a bit higher (c), although not in a major way. While the EMA picture is still bullish (e), momentum is still weak (d). This news should lead to more downside pressure on prices.
Posted by Unknown at 1:00:00 PM