Stocks, Bonds and "Dumb Money" - the Message of the Yield Gap

On Friday, I wrote that Main Street was still the "dumb money" because, after having bought stocks with wild abandon in the late 1900s through the early part of the last decade -- just as the historic bull market hit its peak -- beginning in 2008 they were pulling out of stocks and piling into bonds, a trend that continues and if anything has amplified this year.
I have no doubt whatsoever that in the aggregate, small investors will continue to pull out of stocks until well after the next bull market has begun, whenever that may be. If you don't believe me that this is the case, then consider the following from Saint John Bogle, the founder of Vanguard Funds:

from 1982 to 2002, a period when the market averaged over 12.75%, the average investor only earned 3.5%. That is like paying an 8% load EVERY SINGLE YEAR! Why? Because investors buy high high, sell low, chase returns, and invest in expensive products with high annual expenses.

Human nature has not changed in the last 8 years. Which leads me to follow up with today's topic.

There is another measure of the relative preference for stocks and bonds that has some long term implications, and that is the Barron's stock/bond yield gap. This measures the difference between the dividend yield on stocks (specifically the DJIA, but the S&P 500 can also be used) and best-grade corporate bonds (although the AAA bond index can also be substituted). Below I reproduce this graph for the last 76 years.
As an initial note, you will see that formerly the gap was positive, meaning that investors demanded higher dividends from stocks than interest rates on bonds, due to the increased risks associated with stock ownership. After world war 2, due largely to the differing tax treatment of capital gains vs. interest and dividends, favoring the former as opposed to the latter, dividend payments decreased over the long term, and the series has been persistently negative, meaning that bond interest rates exceeded stock dividends.

Nevertheless, there are some long term trends having to do with inflation, disinflation, and perceived risk. And, specifically drawing your attention to perceived risk, note that this year the yield gap has shrunk to its lowest level, save for 1978, in over 40 years, as shown in the graph below: 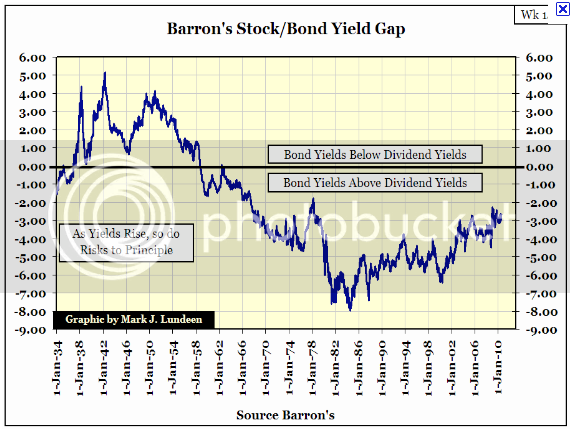 This means that investors were willing to be satisfied with a mere 2.27% more in annual interest in order to achieve the perceived safety of their principal from high grade bonds vs. blue chip stocks. Put another way, your average investor is so wary of stocks that s/he thinks that the value of blue chip stocks in the near future will appreciate less than 2.27% a year! Contrast that with a decade ago, when the yield gap of ~6% indicated that investors thought stocks would appreciate by at least that much on an annual basis -- OOPS!!!

Let's compare the yield on the S&P 500 with the inflation rate and other interest rates.
In the first place, consumer price inflation is currently running at 1.3%. It has not run above 2.5% since the oil price spike of early 2008 -- and there is zero, zilch, nada, NO prospect of sharply increased inflation in the near future. So stocks are paying dividends that are already in excess of the inflation rate and have been since the 2008 crash.

The annual dividend yield on the S&P 500 exceeds all of these.

But what about risk? Well, risk will either result in higher inflation or in deflation. But how will bonds perform then? If there is higher inflation, the price of bonds will decline, and persons holding bonds will find that the current low interest payments mean slow confiscation of principal. If there is a catastrophic deflation, then bonds too will blow up, just as they did during the great depression and also during the 1938 recession -- so principal will be lost in that scenario as well. In short, if stocks fail, so will bonds.

But what if stocks DO appreciate? If it is accompanied by inflation, once again bond prices will fall and low interest rates will mean slow confiscation of principal. If there is trivial inflation or trivial deflation (price stability), then bonds will deliver 2%-5% depending on the type of bond, and will fail to deliver any principal appreciation, in contrast to stocks. So if stocks appreciate, bonds will *not* follow.

In other words, the risk/reward ratio is assymetric between stocks and bonds at this yield difference. Risks are similar, but reward scenarios strongly favor stocks.

It is a little known fact that, had you invested in a 30 year bond in 1982 at the dawn of the greatest stock bull run of all time, and reinvested dividends and interest payments accordingly, in 2000 you would have made slightly more gross profit in bonds than in stocks -- although the tax treatment was vastly different. In the last 10 years, bonds have strongly outperformed stocks, as interest rates have continued to fall in the face of stagnant or declining stock prices.

There is a very good chance that the next 10-15 years are going to see stocks a vastly superior choice compared with bonds, due to the assymetrical risk/reward scenario I have set forth above. (For those who are interested, this means that we are beginning to see the outlines of the change in Kondratieff seasons that will take place in the next 5-10 years).

In other words, a long term investor would want to seriously consider gradually changing their asset allocation away from bonds and into stocks -- exactly the opposite of what the small investor is doing.
Posted by New Deal democrat at 8:30:00 AM