Let's take a look at the lending activity from the latest Beige Book:

Lending activity was stable to down slightly on net. Most Districts reported little or no change from existing low levels of commercial and industrial lending, as businesses remained quite cautious about expansion plans. Dallas and San Francisco reported that overall lending trailed off, with declines driven by weak business lending stemming in large part from uncertainty about future economic conditions. Consumer lending remained sluggish in general, with contacts in Philadelphia and Richmond emphasizing the role of households' ongoing efforts to reduce their debt burdens. A recent flurry of refinancing activity spurred increased demand for residential mortgages in the New York, Cleveland, Chicago, and Kansas City Districts, but new-purchase mortgage originations remained quite sluggish in general. A few Districts pointed to increases in nonbank financing activity, including rising availability of trade credit in Atlanta and further increases in venture capital funding in San Francisco.

Let's take a look at the data from the districts:

Philly: Total outstanding loan volume at most of the Third District banks contacted for this report has been virtually level since the last Beige Book. Commercial bank lending officers said there has been a slight increase in credit extended on home equity lines, but practically no change in outstandings in other credit categories. Bankers continued to report low demand for both consumer and business loans. "It's still a deleveraging story," one banker said. Commercial bank officers indicated that credit quality has been steady or has improved slightly since the last Beige Book.

Cleveland: The market for business lending remains soft, with bankers generally characterizing the demand for new commercial and industrial loans as steady or slowly improving. Commercial real estate lending is particularly weak. Interest rates moved by only a few basis points. On the consumer side, conventional loan demand is weak. Those seeing an uptick attributed it mainly to consumers looking for home equity loans and competitive pricing. Most of our contacts said that the demand for residential mortgage refinancing is very strong, while new-purchase mortgage originations continue at a slow pace. Core deposits held steady or increased at almost all banks, with much of the growth occurring in transaction accounts. Reports on credit quality were mixed, while delinquency rates declined somewhat. Employment rolls and wages showed little change.

Richmond: Banking was widely described by contacts as weak and relatively unchanged since our last assessment. Several bankers noted that consumer loan demand remained soft, as consumers continued to reduce debt, and mortgage demand centered mostly on refinancing with existing clients. Small business loan demand was also described by most contacts as soft, as firms struggled with weak demand. One community bank official stated that auto dealers had difficulty obtaining floor-plan loans, even though they needed more inventory to support the current sales rate. A bank economist reported some improvement in equipment expenditure financing, which was mostly to replace out-dated technology and not to increase capacity. Tighter controls on credit cards, such as higher fees on overdrafts, were cited by one banker as limiting consumers' credit card usage. Credit quality was mostly unchanged, with several bank contacts noting no increase in delinquencies or late payments.

Atlanta: Uncertainty and conservative lending continued to hamper loan activity across the District. Businesses cited difficulties receiving credit and many firms expressed little or no interest in applying for new loans because of low expectations for future sales or orders. Businesses also reported refusing offers of credit because of unfavorable terms from banks. However, multiple contacts indicated an expansion of trade credit to create and extend lines of credit outside of the traditional banking infrastructure. Personal and business bankruptcies increased across the District.

KC: Bankers reported steady loan demand, stable deposits, and an unchanged outlook for loan quality. Overall loan demand was little changed after edging up in the previous survey. Demand was also stable in all major loan categories. As in previous surveys, a few banks tightened standards on their commercial real estate loans. However, credit standards on other types of loans were unchanged. Slightly more bankers reported an improvement in loan quality from one year ago than reported deterioration. Also, for the third straight survey, respondents expected no change in loan quality over the next six months. Deposits were flat, continuing the pattern since late last year.

Dallas: Financial firms said loan demand continued to trail off. Business lending was especially weak, and contacts said businesses lacked confidence and were unwilling to make financial commitments. Deposit growth was strong, and credit quality on outstanding loans was stable. Several respondents reported concerns over financial reform legislation and other political uncertainties. Earnings projections are flat for 2011, and some contacts were building up loan loss reserves in preparation for the coming year.

SF: District banking contacts reported that loan demand slipped somewhat. Commercial and industrial loan volumes waned a bit, reportedly restrained by businesses' cautious attitudes towards capital spending stemming from their uncertainty about the future economic environment. While a majority of respondents across all industries indicated that they anticipate no change in the pace of economic growth in their respective industry or area in the second half of the year compared with the first, most of those who do expect a change foresee a slowdown as opposed to a pickup. Consumer loan demand also remained weak overall. By contrast, venture capital financing continued to be a bright spot, with contacts noting increased levels of funding, as well has heightened IPO activity. Although contacts noted slight improvements in overall credit quality, lending standards stayed relatively restrictive for business and consumer lending.

Recently, the FDIC issued their quarterly banking profile. I covered that report in two installments, which are here and here. 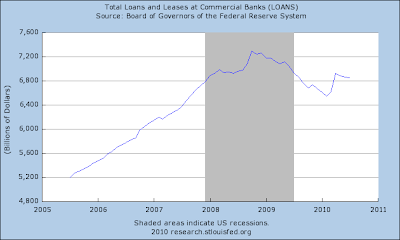 Total loans and leases rose briefly earlier this year, but are still at depressed levels. 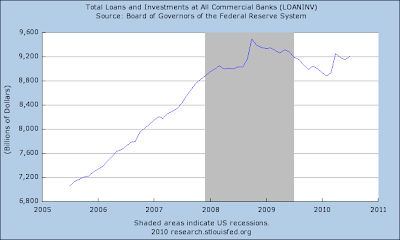 The same analysis applies to the total loans and investments 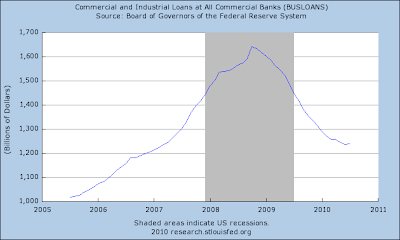 Commercial and industrial loans are decreasing, as are 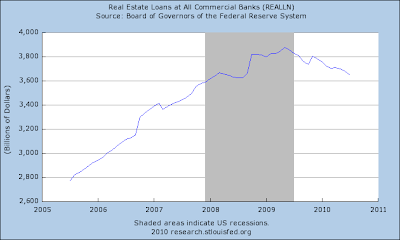 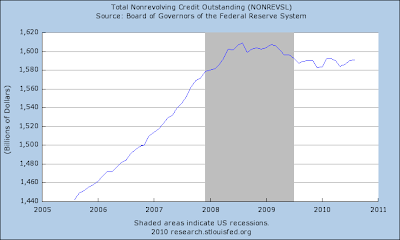 Total non-revolving credit outstanding has been stagnant while 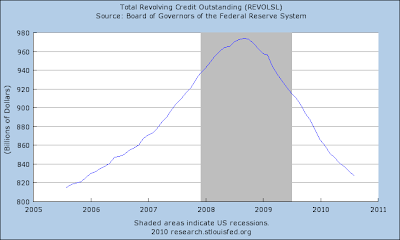 Revolving credit has been dropping. 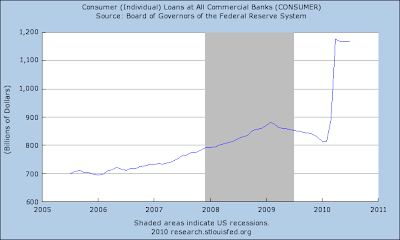 I have no idea what caused the big spike in consumer loans, which look very out of place considering 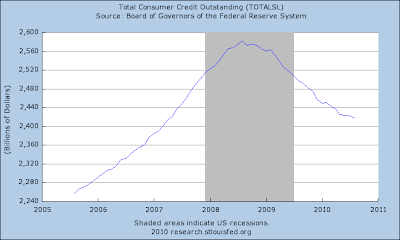 Consumers are continuing to cut back on overall credit outstanding.