In the week ended Sept. 4, U.S. railroads loaded more carloads than in any week this year. There were more carloads loaded per week in August than in any month since November 2008, says the Association of American Railroads. Carloads typically haul commodities like coal, metals and grains.

Doing still better is intermodal traffic -- containers and trailers that are passed between rails, ships and trucks. In August, U.S. railroads originated a weekly average of over 234,000 intermodal trailers and containers -- the most since October 2008, AAR reports, and up nearly 20% from August of last year.

However, intermodal traffic continued to rise in August.

On balance, railroads have been a bright spot in the murky recovery. To some degree, this reflects rail's competitive edge more than any broader economic strength. Cheaper and more fuel-efficient than trucks, rails have been gaining market share for medium- and long-haul transport in recent years. During the recession, many struggling truckers trimmed fleets. As a result, there's been "a big shortage of truck capacity," Mims said. This has allowed still further gains for the rails.

Global grain demand has strengthened in the wake of Russia's decision to halt wheatexports. Burlington Northern Santa Fe cites grain shipments as an area of current and forecast strength.

"We are anticipating a very large harvest across all the grain-producing states for corn, wheat and soybeans," Burlington Northern Santa Fe spokeswoman Suann Lundsberg wrote in response to questions from IBD. "Additionally, we are seeing strong world demand" for U.S. wheat, corn and soybeans.

For the railroad industry as a whole, shipments of metals including scrap, iron ore and rolled steel have been on the rise.

BNSF also reports strength in shipments of commodities used in oil and gas drilling. These include pipe, sand and a variety of clays.

Of 19 commodities carried by rail and tracked by AAR, 16 enjoyed increased carload loadings in August when compared with last year.

Consider these charts from RailFax:

Baseline traffic has rebounded from a lull at the beginning of the third quarter.

Cyclical traffic has increased from a lull as well.

Intermodal traffic is in a strong upswing. As a result,

Total rail traffic is at it's highest point in a year.

In addition, here is a link to a chart that shows how far cyclical and inter-modal traffic have come.

In addition, consider the latest report from the American Association of Railroads:

The Association of American Railroads (AAR) today reported weekly rail carload volume set a new 2010 record for the second consecutive week. U.S. railroads originated 305,000 carloads during the week ending Sept. 4, 2010, up 6.9 percent compared with the same week in 2009, and at comparable levels to the same week in 2008. The 2008 comparison week included the Labor Day holiday while the corresponding weeks in both 2010 and 2009 did not. In order to offer a complete picture of the progress in rail traffic, AAR reports 2010 weekly rail traffic with comparison weeks in both 2009 and 2008.

And consider these charts: 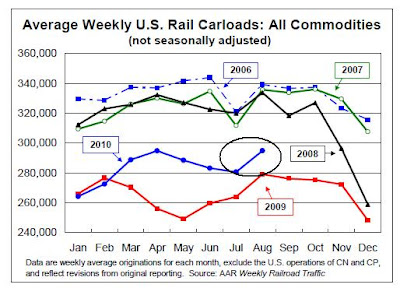 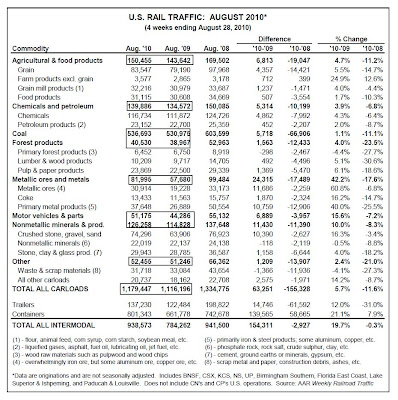 The totals for each category are increasing on a year over year basis. 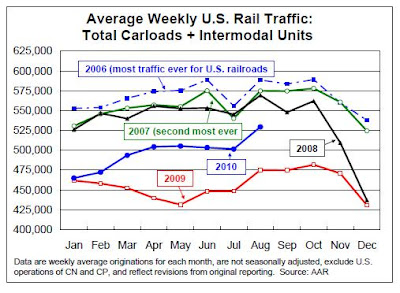 See also this post on port traffic at the Port of LA.