From the National Association of Realtors:

The Pending Home Sales Index,* a forward-looking indicator based on contracts signed in November, fell 16.0 percent to 96.0 from an upwardly revised 114.3 in October, but is 15.5 percent higher than November 2008 when it was 83.1. 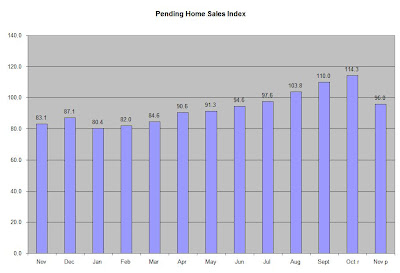 The drop occurred in November when it looked as though the first time homebuyer tax credit would expire. That is what is probably behind this number. Also note that with the credit the index saw 9 months of increases. That tells us that with the reinstatement of the credit we should see this number moderate over the next few months. In other words, the fundamental situation in this market has clearly changed for the better.

In a further sign that the U.S. factory sector is emerging from recession, businesses stepped up their demand in November for capital equipment to expand production, the Commerce Department reported Tuesday.

This is the seventh increase in the past eight months.

October's orders were revised higher by two-tenths of a percent to 0.8%.

As noted on this blog over the last ~6 months, the manufacturing sector has been continually improving from its extreme lows at the end of last year/beginning of this year. Notice the strength in these numbers: this is the 7th increase in 8 months. That's very strong. Here's a chart: