Nonfarm payroll employment edged down (-85,000) in December, and the unemployment rate was unchanged at 10.0 percent, the U.S. Bureau of Labor Statistics reported today. Employment fell in construction, manufacturing, and wholesale trade, while temporary help services and health care added jobs.

Here are the charts: 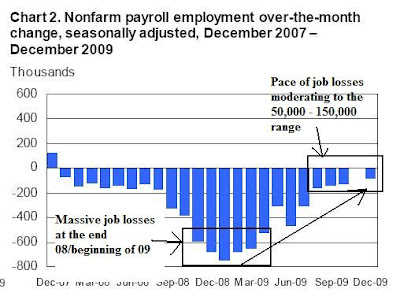 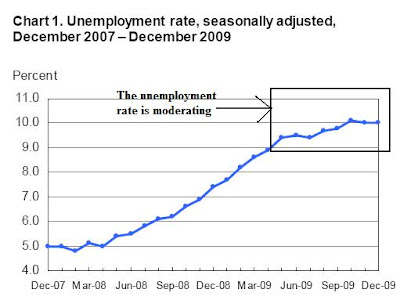 As for the unemployment rate, notice that it is moderating as well. It has been in the 9.5% - 10% range since the summer.

Let's look at the internals.

Hours of work and overtime were unchanged and average hourly earnings were higher.

The headline number is a disappointment. However, it's important to remember that economic numbers do not move in straight lines. There have been speed bumps as the jobs situation has developed for the better over the last year. So far, this looks to be that as well.
Posted by Unknown at 7:38:00 AM